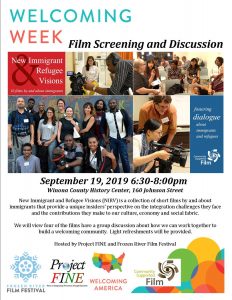 Project FINE and the Frozen River Film Festival are hosting a film screening from 6:30 to 8 p.m. Thursday, Sept. 19, at the Winona County History Center at 160 Johnson St.

The screening will include four films and a discussion about how we can work together to build a welcoming community.  Light refreshments will be provided.

New Immigrant and Refugee Visions is a collection of short films developed by Community Supported Film by and about immigrants that provide a unique insider perspective on the integration challenges they face and the contributions they make to our culture, economy and social fabric.

Project FINE is a nonprofit organization dedicated to creating a respectful and sensitive community.  This film screening is part of their annual celebration of Welcoming Week, which brings together immigrants, refugees and long-time residents in a spirit of unity to build strong connections across the community and affirm the benefits of welcoming everyone – including new Americans.

Frozen River Film Festival is Minnesota’s only all-documentary film festival.  Now in its 15th year, FRFF presents more than 80 films annually during the festival weekend (Feb. 5-9, 2020), brings in filmmakers from around the world, and works with students on the documentary film-making process. To learn more visit www.frozenriver.org.