About 350,000 missionaries go to Haiti every year. It creates a real strain for the Haitian people to welcome and accommodate them. These trips, like that listed below, are not an effective way of creating economic assistance.

Abby Robichaud was one of 27 people connected with Trinity Presbyterian Church in Plymouth who traveled to Haiti last month to work with vulnerable children.

It was the second time Robichaud, a Canton resident, made the trip. Following the trip, there was one thing Robichaud knows for certain.

She’ll have plenty of chances. Trinity Church, operating under the umbrella of World Orphans, makes two trips a year to Haiti and another to Africa. The idea, according to Ellie Schupra, the church’s executive director, is to connect with a church partner to care for vulnerable and orphaned children.

Trinity comes “along side (the church partner) to … look at educational opportunities and economic empowerment for families in Haiti,” Schupra said, “to bring healing to the brokenness and provide tools and resources that help people break free from the cycle of generational poverty.”

Church members spent three days with the families, taking kids to a camp, providing an English class and conducting a parenting seminar.

The highlight of the trip, though, was a field trip to Respire Haiti. Respire is a compound that includes school buildings, athletic fields, a feeding program and a safe house. It was founded seven years ago by 24-year-old Megan Boudreaux, who got the idea after a visit to Gressier, Haiti, in December 2010.

Church members were happy to see all the smiling faces during their Haiti trip. (Photo: Mackenzie Reed )

After returning home to the U.S., Boudreaux ruminated on the idea and returned a few months later to establish Respire. For church members, Respire was one of the more impactful parts of the trip.

World Orphans partners Trinity with local churches and this year’s partnership was a new one Schupra thinks will end up being a “wonderful partnership.” She said leaders of both churches have “the same values and vision,” giving the partnership a chance to be “very productive in serving the people of Haiti.”

The connection with the children of Haiti resonated with the Trinity members who made the trip. Engel talked about the trip to Respire and how kids who weren’t connected with either church would approach the Trinity contingent and engage with them.

During the trip, some hardships were on display. According to Engel, visitors couldn’t drink the water. There was trash up and down the street, animals ran loose and traffic is awful.

While English isn’t spoken by many of the children, that doesn’t keep church members from connecting with the kids. There’s always music. 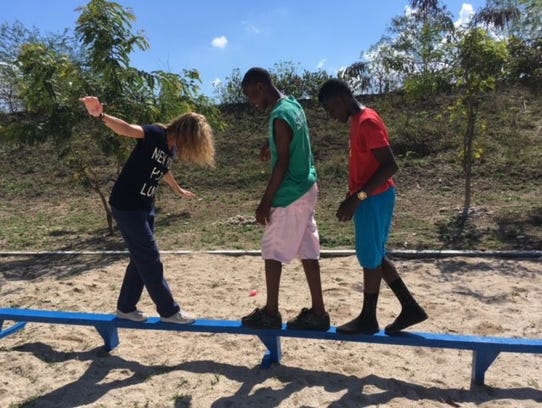 “We listened to music together,” Engel said. “It’s wonderful when you can connect with kids through music. They couldn’t always understand what I was saying, but you can still connect with them. I think music is a connector.”

Trinity is supporting some 20 Haitian kids, representing 17 family units, in what World Orphans calls a “home base care” model rather than an orphanage. Schupra said research suggests its “healthier for kids to be in a family unit” — even if it’s not their own — rather than an orphanage. The financial support, she said, actually “prevents vulnerable kids from being orphaned.”

“It allows parent to keep and care for their kids,” Schupra said. “I love the model.”

The partnership is important, Schupra said, because while there are churches “all over the world,” they don’t all have the financial resources to battle the scope of brokenness in developing countries.

“In addition to supporting kids and families financially, we are building relationships and doing ministry together,” Schupra said. “The scope can be anything from sharing Jesus to clean water to building a school to economic empowerment. We get sheer joy of serving, a deep appreciation for many things, watching people come to know Jesus and, hopefully, encouraging people who are on the front lines of difficulties daily.”

It’s the “knowing Jesus” part that is a big piece of why Robichaud wants to go back.

“My heart is filled when I get to see the kids. I love creating relationships with the kids, making them laugh and creating that bond. That’s why I go,” Robichaud said. “I go because we are the hands and feet of Jesus and He calls us to share the gospel and love others well and that’s what we do in Haiti.”

Like each of the 27 members of the Trinity contingent, Engel also bonded with several of the kids.

“They were so happy and so loving and affectionate,” Engel said. “These were the most happy and joyous kids. It makes you re-evaluate what’s important. We were with them for three days and they smiled ear to ear. It wasn’t long enough.”