ON MIGRATION: ‘This is the moment’: Dreamers face make-or-break push on immigration fight with Trump

By David Nakamura and Ed O’Keefe, December 4, 2017, for The Washington Post 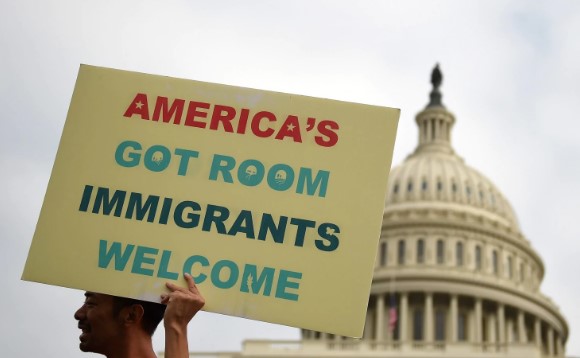 Hundreds of students in the D.C. and Maryland area led a school walkout, protest, march and rally on Capitol Hill on Nov. 9 to demand Congress pass a clean Dream Act. (Astrid Riecken/For The Washington Post)

Through three presidents over a decade, young undocumented immigrants known as “dreamers” have emerged as a potent political force and the sympathetic public face of the immigration debate.

Since 2012, roughly 800,000 have secured permits from the government allowing them to work without fear of deportation under an Obama-era program. Eighty-six percent of the public favors allowing them to permanently remain in the country. Cultural icons from former president Barack Obama to Kim Kardashian West have sent messages of support.

“I stand with the Dreamers,” Kardashian West wrote on Twitter in September.

Even as the dreamers, brought to the country illegally as children, have become more closely integrated into the fabric of American society, their very political success has exposed them to the whims of Washington’s legislative impotency. Since the George W. Bush administration they have been buffeted by a severe whiplash of extraordinary policy victories — and crushing defeats.

This month, the dreamers face the biggest test yet of their political clout — a make-or-break moment in their long path to the precipice of becoming fully legalized residents. A loss would mean a devastating return to living in the shadows and the perpetual fear of being deported.

President Trump, who ended the Obama-era deferred action program in September, has set a March 5 deadline for lawmakers to act before the bulk of the permits begin to expire at a rate of nearly 1,000 per day. Most on Capitol Hill said a deal must realistically be done before the end of December because a bipartisan agreement would become more difficult in a midterm election year.

For the dreamers, the moment has reactivated a nationwide political network honed over the past decade. Motivated anew, they are planning to ramp up the emotional, in-your-face demonstrations that have brought them to this precipice.

“This is the moment,” said Cristina Jiménez, executive director and co-founder of United We Dream, the nation’s largest dreamer organization. The group is planning a major mobilization Wednesday in which thousands of members are expected to flock to Washington to lobby Congress.

“It’s higher stakes for us in comparison to other fights,” Jiménez said. “The reason why is we’re facing the most aggressive immigration enforcement environment in our lifetime.”

The fight over dreamers could have even greater consequences: Some Democrats have suggested they will not support a must-pass spending bill without a deal that offers the dreamers a path to citizenship. Last week, Republican Reps. Carlos Curbelo and Ileana Ros-Lehtinen, both of Florida, added their names to that list.

On Tuesday, 35 members of the House Republican caucus co-signed a letter calling on House Speaker Paul D. Ryan (R-Wis.) to allow a vote on a permanent solution for dreamers by the end of the year. But the group, which included a cross-section of new and long-serving members as well as representatives from urban and rural districts, did not endorse a specific piece of legislation or threaten to withhold their votes on other matters if the issue isn’t resolved.

“We should not be using these young people’s lives as political footballs,” he said.

The U.S. Chamber of Commerce on Monday urged Congress to protect the dreamers as the business community prepares to push Congress on the issue as well.

“The longer Congress waits, the more Dreamers will lose their ability to work here legally and become subject to immediate deportation,” said Tom Donohue, the Chamber’s president and chief executive. “This will cause serious disruptions in the business operations of the companies that employ them, which is why many business leaders have spoken out and demanded action on this issue.”

Trump — who had previously suggested he would take care of the dreamers — has sent recent signals that he would support a spending bill without a dreamer provision. In tweets, the president has blasted Democrats for obstructing a deal and favoring policies to allow more illegal immigration. “I was troubled that he’s talked about the illegal immigrants pouring into the United States unaccounted for — that isn’t even close to the definition of a dreamer,” Sen. Richard J. Durbin (D-Ill.) said.

Durbin said he doubts whether Trump truly wants to help dreamers after being stung by political blowback from his base over the issue.

In some regards, though, the dreamers already have won the battle of public opinion: 86 percent support allowing them to stay in the country, according to a Washington Post/ABC News poll in September.

The broad support reflects the dreamers’ political success in telling their own narrative, a process that began in the final years of the Bush administration amid ramped-up immigration enforcement raids. As dreamers were caught up in the dragnet, they began to go public with their stories, daring authorities to make them a target.

The dreamers modeled their nascent political strategy after gay and lesbian activists who made themselves the faces of their movement. The hope was that the country would see the younger immigrants as responsible students and members of their communities.

“Up until then, the narrative was of immigrants as victims, as living in the shadows,” said Marielena Hincapié, executive director of the National Immigration Law Center, which acted as an incubator for the group that became United We Dream in 2008.

Although Democrats had introduced the Dream Act, seeking to provide a pathway to citizenship, in 2001, the idea of pushing for legal status for a fraction of the nation’s estimated 11 million undocumented immigrants was initially controversial even among immigration advocates. The dreamers, a group estimated at up to 1.5 million, are considered the most publicly sympathetic of the undocumented population, given that they had no choice in their arrivals in the country.

If they were to achieve legal status, some advocates cautioned, that would make it more politically difficult for others, including their parents.

“This notion that pits dreamers against their own parents — it’s flawed,” Jiménez said. “The framework here as a community is to protect the entire community, and there are strategic decision points made in the last decade or so to be able to bring some good news and to be able to protect some members of our community.”

Frustrated by the failure of a comprehensive immigration overhaul under Bush in 2007 and by Obama’s inaction on immigration during his first two years in office, the immigrant rights movement pushed forward on a version of the Dream Act in 2010.

The bill passed in the House but failed by five votes in the Senate.

After the loss, dreamers turned their political activism on the Obama White House, holding marches and other demonstrations to protest a record level of deportations in his first term. In early 2012, under growing pressure to streamline a huge backlog of immigration cases, Homeland Security Secretary Janet Napolitano proposed a deferred action program to allow dreamers to apply for renewable, two-year work permits.

In June 2012, Obama announced the creation of Deferred Action for Childhood Arrivals (DACA) during remarks in the Rose Gardenpunctuated when a reporter for a conservative news site interrupted the president to ask why the policy favors “foreigners over American workers.”

“I didn’t ask for an argument,” Obama responded, but then answered: “Here’s the reason: because these young people are going to make extraordinary contributions, and are already making contributions to our society.”

“That was one of the most important moments in the immigrant rights movement,” Hincapié said. “This was a victory fought for and won by the people who were directly impacted.”

That’s why, advocates said, it would be so painful if the dreamers lose DACA protections. Having worked openly for five years, they are now facing the prospect of returning to a life on the margins.

“Any debate on immigration once someone has legal status, the carnage and human suffering in moving from legal status to illegal status is incredibly compelling,” said Leon Fresco, an immigration attorney and former aide to Sen. Charles E. Schumer (D-N.Y.) who worked on a 2013 immigration bill.

In 2015, a federal judge in Texas blocked Obama’s bid to create a larger deferred-action program for up to 4 million immigrant parents of U.S. citizens. The injunction remained in place after the Supreme Court deadlocked, 4 to 4, on the case last year.

This summer, Texas and several other states threatened to sue the Trump administration over DACA, prompting Trump to rescind it in September, saying the program was unconstitutional.

Ironically, it is Trump whose actions could finally push the dreamers over the top in their long campaign to win legal status.

“He will absolutely get credit for that,” Hincapié said. “If I were advising him, it would be something to get behind, and he could say whatever he wants to say to his base. At the end of the day, he’s the leader of the Republican Party, and it’s something his party needs, something the country needs, and it’s good for the dreamers.”