Should the United States be a “melting pot” or “salad bowl?” Should our immigrant cultures melt into one-another or remain distinct?

Here are a selection of films from the New Immigrant and Refugee Visions collection – films by and about immigrants – that show how immigrants experience issues of assimilation and acculturation. Before you watch them, please review the “Questions-to-consider…” at the bottom of this page.

Donate
Buy Films
We can’t do this work without your support. In response to the current crisis we are making these films available online for free for a limited time. Please help us cover our costs by donating.
Buy the films and ask your library to buy the films: A great way to support CSFilm is to use this text to ask your town or institution’s library to purchase the films.
Worlds Apart at Home (Original 9:58, Excerpt 00:58)
Filmmaker: Abdirahman Abdi
Editor: Peter Rhodes; Additional Sound: Mubarak Muwonge Nsamba
Samira Ahmed Fiin escaped with her family from Somalia as refugees to the United States in 2007. Now she negotiates tensions between parents and teenagers – as the young try to fit into and enjoy American culture and the old try to hold on to their Somali traditions.

Abdirahman Abdi
Emigrated from Somalia in 2007, lives in Roxbury, MA
Abdi came to America as a young boy and has remained active in his local and Somali community. He has volunteered his time and multi-media production skills to advance the work of the Somali Development Center and the North American Somali Students Union. Abdi graduated in May 2018 from UMass Boston with a degree in media communications and sociology. With continued mentoring from CSFilm, he has continued since the NIRV training to produce short documentaries on economic and social issues in his Roxbury neighborhood.  Abdi was hired in 2020 as a freelance videographer and editor by Boston news station, WCVB-TV, Ch 5.

About Issues of Acculturation and Assimilation:

More information about refugees and immigrants.

Navigating Hope (Original 8:14, Excerpt 1:23)
Filmmaker: Sayed Najib Hashimi
Editor: Devvrat Mistra; Additional Editor: Beyza Boyacioglu
“A refugee is that person who has lost everything in his life. But he hasn’t given up his hope.” Compelling words from a man who lived over 17 years in a refugee camp in Nepal. Mani and his family escaped to the camp from Buddhist Bhutan where they were being persecuted as Christians. As a refugee in the United States, a “big country” he had never heard of as a child, he finds new hope helping other refugees navigate the challenges of life in America.

Sayed Najib Hashimi
Emigrated from Afghanistan in 2016, lives in Washington, DC
Sayed grew up in Afghanistan and was a refugee in Pakistan. He has a degree in literature from Kabul University. He worked from 2005 to 2016 as a journalist and translator with the BBC and NATO Media Group in Afghanistan. In Nov 2016 Sayed and his family were granted permanent residency through the Special Immigration Visa to the United States. Until recently he worked at the New American Center in Lynn MA assisting Afghan and other new immigrants and refugees. He and his family now live in Washington DC where Sayed is working as a Communications Officer at the Afghan Embassy.

These other NIRV films also address assimilation and acculturation:

Questions to Consider While Watching These Films 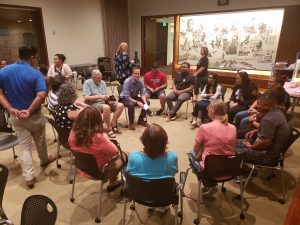 Further Information About Refugees and Immigrants