It’s easy to fall into believing things that aren’t true. It is also easy to be misled by information that is incomplete or taken out of context. To be well informed we need to check our facts, understand how and why people may believe differently, and be aware that even with all the facts people weigh risks and consequences differently. Once we educate ourselves, we can educate others and take effective actions. Review Possible Actions, Resources and Additional Suggestions below.

Below are some examples of myths about immigrants and some quick facts that disprove these myths. Most of these myths are disproved by LOTS of data, but we can’t go into all of that here. Under the table we link to many articles discussing these myths and many more, and sources that provide research-based facts disproving the myths (used for our quick facts).

Myth: Most immigrants are illegal

Quick Facts: Studies of regions where immigrant populations have increased do not show corresponding increases in unemployment. Studies also show that immigrants are not competing for same jobs; they often do jobs employers cannot find native born residents to do.

The US Census Bureau and the Pew Research Center are considered some of the best sources for data. Unfortunately, there are not always easy ways to find all the data related to immigration. Below we have linked to a few pages/reports, but you may want to do a general site search to see all that you can find.

Sometimes you can also find reports on these sites better by using Google or another search engine and typing “Pew immigrant data”. For example, the most comprehensive data on immigrants was published in May 2017 but the results on the Pew Topic pages are listed by most recent first so it would take a while to get down to that.

If you find information on the web and you aren’t sure what the political bias is (left vs. right, progressive vs. conservative), you can check it at the following sites. You can also use these sites to find sources of alternative views to your own so you can learn how other people think.

These are good sites to get additional perspectives on issues. Both are rated as “Least Biased” by Media Bias / Fact Check. AllSides rates FactCheck.org as “Center” and Politifact as “Left Center”. Factcheck.org and PolitiFact focus much more on verifying statements made by politicians or in news stories. Be sure to review the links and footnotes referenced in the articles, as these are usually the more reliable sources used to make their evaluation. 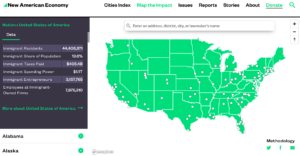 is a bipartisan research and advocacy organization fighting for smart federal, state, and local immigration policies that help grow our economy and create jobs for all Americans. They have an excellent interactive map of immigrant statistics for states and cities across the US along with lots of other tools.

Percentages vs. Numbers: You might see that there has been an increase in the number of crimes committed in a certain area. That might sound scary. But if the population in that area has also increased, then the actual number of crimes per person or per 1000 people may have stayed the same or even gone down.

Historical Context & Visualization: It is also important to look at changes over time. In recent years there have been a record number of immigrants to the United States. Viewing this data can easily look like a crisis: 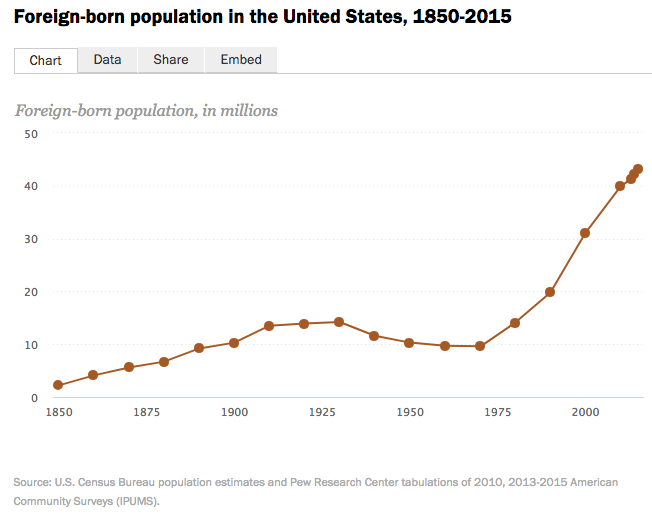 But as a percentage of the total US population, the current immigration rates are still roughly the same as they’ve been for 170 years, with the exception of a dip below 10% for about 50 years (much less alarming): 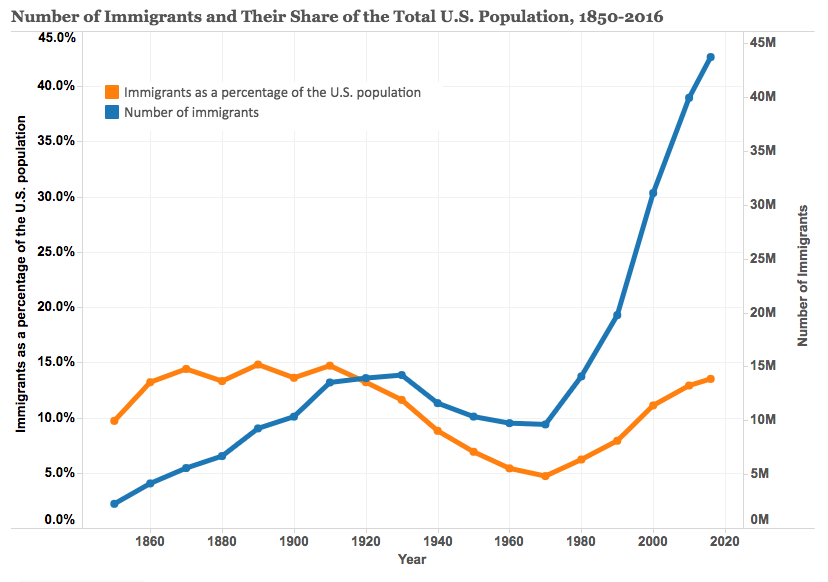 Comparing Data from Both Groups: You might read that there are over 650,000 immigrants in prison. That sounds like a lot. But that is only 1.6% of the total immigrant population. Even that might sound like a lot. But it is important to compare it to non-immigrants. 3.3% of the native born population are in prison. That’s about 9,240,000 – a heck of a lot more than 650,000. But percentage-wise it’s only about double.

Understanding other people’s opinions and perspectives is critical to civil discourse. Yelling, “You’re stupid.” “No, you’re stupid.” at each other rarely helps. When we really make an effort to understand what is at the root of our disagreements, we have a much better chance of being able to find solutions.

When someone says something that you believe to be inaccurate, try asking questions instead of correcting them:

Differences in opinion (or even about what the relevant facts are) often come down to differences in definitions and priorities. Try asking questions that get underneath what they are saying: