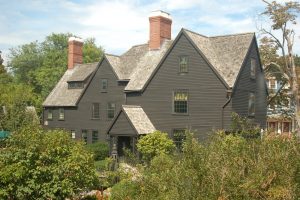 The House of the Seven Gables, a colonial mansion turned non-profit museum, hosted the second in a series of virtual New Immigrant and Refugee Visions (NIRV) Screen&Discuss on Wednesday, March 24th. The event featured  two films from the NIRV collection of short documentary films — Campaign for a New American by Qin Li and Borrowing Fire by Kebrewosen Densamo.

The films were followed by an emotional discussion with Campaign for a New American director, Qin Li (emigrated from China in 2015), and subject, Dimple Rana (of Indian ancestry) and Borrowing Fire director, Kebrewosen Densamo (emigrated from Ethiopia). The conversation highlighted the toll taken on immigrants during the pandemic and the heightened vulnerability felt after the Atlanta spa shootings that killed eight people — six of whom were women of Korean and Chinese descent.

Dimple Rana and her family have faced racist attacks during her campaigns for Revere city council. The all white city council, in a city which is 45% people of color, subsequently refused to confirm Dimple’s nomination by the Mayor to lead the city’s Human Rights Commission – a voluntary position. Despite this affront, Qin Li has been nominated by the Mayor to be on the city’s Arts Council.

The audience voiced support and admiration for the efforts of all three women and a desire to directly support Dimple Rana’s next run for city council – once she recovers from an exhausting year helping Revere’s vulnerable frontline population cope with COVID. Comments included:

Thank you for allowing us to share our humanity.  Thank you for your bravery and for demonstrating such optimism in the face of attacks and life-threatening obstacles.

I *know* that hate language happens, but damn it hurts more to hear about it happening to people you connect with. I’m so sorry to hear about Dimple’s trouble.

I really enjoyed this and it was very emotional in part. I was crying as it went on, when they told how they have been treated. I know, unfortunately, this goes on, but hard to hear them talk about it. More people should hear it, because it is just getting worse, and needs to stop.

[This event demonstrated that] the power of sisterhood is strong and the three women who joined us tonight are the future of America and therefore we’re in good hands. 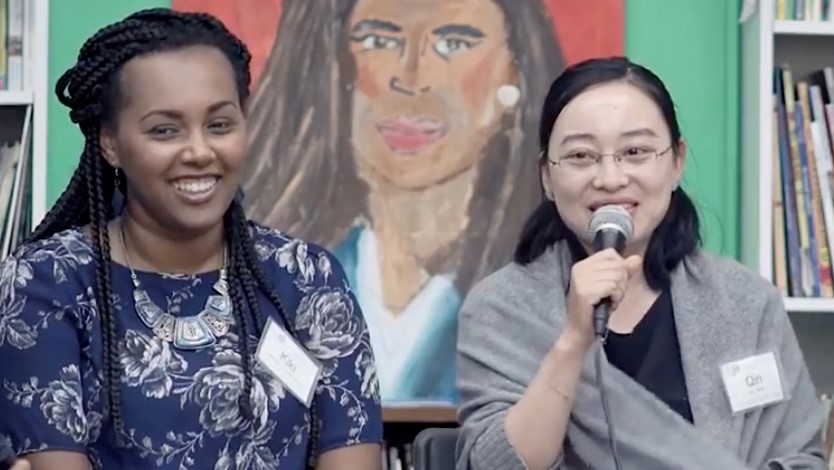 In the evaluation of the event, atendees expressed their their appreciation for this experience and motivation to get further engaged in immigration issues:

The intellectual knowledge [of immigration issues] was made more real by meeting and engaging with the people whose stories were shared.

I feel more hopeful. Honestly after the last few weeks I was feeling pretty discouraged and the energy from this event helped.

Qin Li’s emotional reaction to her friends reaching out to her asking about her wellbeing regarding the news about anti-Asian hate crimes rising has inspired me to do the same to a few of my friends. Before I had worried that as a white man any attempt I might make in that regard would be harmful, no matter my intention.

I was quite moved by this event, thank you for hosting and coordinating this – I recognize some of the great effort that went into this, and am grateful for the chance to join this event. I respect the overall objective – to develop media activists – and the rigorous process on all fronts that resulted in these compelling stories.

I will work harder to foster acceptance of immigrants. Especially inspired by the poignant emotional presentation on behalf of the Asian (Chinese) population.

Thank you to all who participated and took the time to provide feedback via the evaluation.

Join the Gables and CSFilm September 22nd for another NIRV Screen&Discuss with the films Lift with Your Heart, by Braulio Tellez-Vilches and Pulse of a Dream, by Mubarak Muwonge Nsamba.

Organize a New Immigrant and Refugee Visions Screen&Discuss in your community – we are here to help!

Special thanks to Julie Arrison-Bishop, Gables’ Community Engagement Director, for all her work to organize and host these events.