Northshore Magazine: The House of the Seven Gables to show short films by and about immigrants

Register for this event

October 1, 2020, SALEM, MA — Though recent immigrants have confronted a host of challenges, many have stepped up to share details of their inspiring experiences. Through a series of short films they’ve made with support and instruction from Community Supported Film in Boston, immigrants have found a way to connect with their communities through their heartfelt stories.

On Wednesday, October 7, from 6:30 to 8:30 p.m., The House of the Seven Gables will screen three of these short films. Although the event is virtual, there will be an opportunity to speak  with filmmakers and the program’s founder and award-winning documentary filmmaker, Michael Sheridan. Participants will be given some questions in advance to help them join the conversation. Although no fee is charged for this event, donations are greatly appreciated.

Three of the 10 films in the New Immigrant & Refugee Visions series will be shown. They are deeply moving, close-up looks at the lives new immigrants are building in this country. Immigrants paired up to make these documentaries about each other. They got to know one another, then learned how to write scripts and make the films. After viewing the films, participants may join the discussion.

Sheridan also started the documentary film wing of Oxfam at the same time that he taught filmmaking at Northeastern. In 2010 he traveled to Afghanistan where he trained 10 Afghans to tell their stories through documentary filmmaking. He conducted an intensive six-week bootcamp. “He trains people, often first-time filmmakers, to tell  stories about their lived realities to share and affect change,” says Zayde Buti, the organization’s creative coordinator. Buti says that Sheridan went to Haiti after the devastating earthquake and enlisted 10 more first-time filmmakers. “The situation was so confused and convoluted,” says Buti. “People outside of Haiti didn’t know what it was like there.” New Immigrant & Refugee Visions is Sheridan’s third major project. 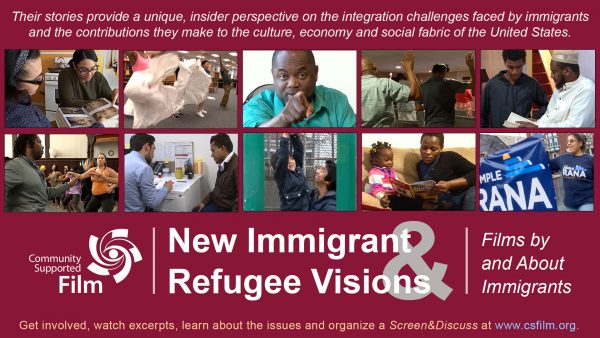 Films to be screened and discussed:

She’s an American Child, about the uncertainty of family unity when some members fear deportation;

Rhythms of Respect, about a Puerto Rican musician using his skills to expand cultural understanding;

Seeking Settled Ground, about a young Rohingya man, persecuted as a Muslim, who escapes likely death.

View excerpts from all the films

Vision: To preserve, share and continue the American story.

Mission: To be a welcoming, thriving historic site and community resource that engages people of all backgrounds in our inclusive American story. For more information visit www.7gables.org.