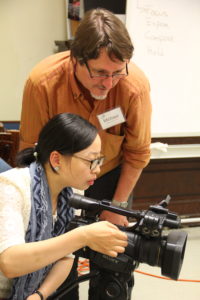 SALEM, MA — The House of the Seven Gables is about to kick off a dynamic new film and community conversation series. On Wednesday, March 25, from 5:30 to 8 p.m., The Gables will screen the first two short films in the New Immigrant & Refugee Visions five-part program. Each of the 10 films in the series — made by and about immigrants — runs between 10 and 12 minutes. They are deeply moving, close-up looks at the lives new immigrants are building in this country. A discussion with the Michael Sheridan — documentary filmmaker, teacher and project founder — along with one of the filmmakers, follows each set of films. The Gables will host five New Immigrant & Refugee Visions programs, with the last one scheduled for July 15.

Michael Sheridan is also founder of Community Supported Film (CSFilm), based in Boston. He started the documentary film wing of Oxfam at the same time that he taught filmmaking at Northeastern. In 2010 he traveled to Afghanistan where he trained 10 Afghans to tell their stories through documentary filmmaking. He conducted an intensive six-week bootcamp. “He trains people, often first-time filmmakers, to tell stories about their lived realities to share and affect change,” says Zayde Buti, the organization’s creative coordinator. Buti says that Sheridan went to Haiti after the devastating earthquake and enlisted 10 more first-time filmmakers. “The situation was so confused and convoluted,” says Buti. “People outside of Haiti didn’t know what it was like there.” New Immigrant & Refugee Visions is Sheridan’s third major project.
Sheridan will be joined at each of the five events at The Gables by one of the filmmakers along with community leaders who work with the issues raised in these films. The conversation’s facilitator will be a member of The Gables’ Community Engagement Committee.

“These films, along with the conversations that will take place afterward, create a fairly comprehensive picture of diversity of experience,” says Elsabel Rincon, manager of The Gables’ Settlement programs. Sheridan found that because each young filmmaker creates a film about another immigrant, a deeper, more revealing connection is achieved. “They tell their stories to people who can relate,” says Rincon.

The first two films to be shown, on March 25, are “Campaign for a New American” by Qin Li and “Pulse of a Dream” by Mubarak Muwonge Nsamba. Filmmaker Mubarak Muwonge Nsamba studied forestry in Uganda but works in IT. He emigrated from Uganda in 2017, and lives in Lowell. He turns the camera on himself in his documentary that shows how he and his wife, an educated Ugandan couple, cannot get work in their professions despite their skills and expertise. The couple work as nursing assistants.

Li’s film features an Indian immigrant’s daughter as she campaigns to be the first woman of color elected to the city council. Filmmaker Qin Li is a scholar and activist focused on women’s empowerment. She emigrated from China in 2015, and now lives in Revere.

March 25 – POSTPONED
“Campaign for a New American”: Filmmaker Qin Li documents an Indian immigrant’s daughter as she campaigns for city council.
“Pulse of a Dream”: Highly educated, skilled professionals from Uganda cannot get work in their fields.

May 6
“Navigating Hope”: Seventeen years in a refugee camp in Nepal.
“Seeking Settled Ground”: A young Rohingya man, persecuted as a Muslim, escapes likely death by walking from Myanmar to Thailand.

June 10
“Lift with Your Heart”: A choreographer finds purpose in teaching dance to heal and engage community members.
“Rhythms of Respect”: A Puerto Rican musician uses his skills to expand cultural understanding.

July 15
“The Arranger”: Haitians help each other settle into their new lives.
“Borrowing Fire”: An immigrant finds that his cultural characteristics open doors and help him help others suffering from depression, homelessness and addiction.

About The House of the Seven Gables Settlement Association and its mission
Vision: To preserve, share and continue the American story.
Mission: To be a welcoming, thriving historic site and community resource that engages people of all backgrounds in our inclusive American story. For more information visit www.7gables.org.