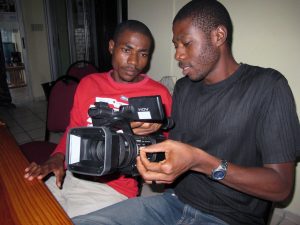 Ralph Thomassaint Joseph is a Haitian multimedia journalist currently serving as the Editor-in-Chief at AyiboPost.  In September he will begin a two years masters program at NYU.  Ralph has been working to continue CSFilm’s training and production work in Haiti since leading the implementation of our 2014  training that lead to the creation of Owning Our Future – Haitian Perspectives in Film.

Prior to the Haitian earthquake in January of 2010, Ralph worked for Enfòmasyon Nou Dwe Konnen (ENDK), a daily radio program launched by Internews, a non-profit that provides a platform for local news to be distributed globally. After the earthquake in Haiti, Joseph’s work was distributed to nearly 40 radio stations to keep locals up to date on the conditions in Haiti. In addition, he was part of nearly 600 news shows, which ended up serving as training tools for young and aspiring Haitian journalists. Joseph is the winner of the 2014 Prix Philippe Chaffanjon award for multimedia reporting in Paris, France.