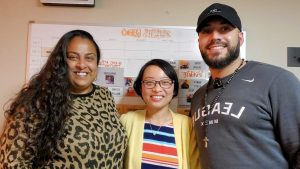 NIRV filmmaker Qin Li, director of Campaign for a New American, made her ZUMIX radio debut on Tuesday afternoon!

Qin and her film subject, Dimple Rana, chatted with Luis Martinez, host of “Want and Get It”, a show mixing upbeat Latin music with motivational conversation.

A community station powered by youth, ZUMIX Radio (94.9FM) broadcasts diverse music and content that reflects the many voices and perspectives of Boston.

Qin’s first documentary, Campaign for a New American, was produced during Community Supported Film’s New Immigrant and Refugee Visions training.  Qin’s film follows Dimple as she campaigns to be elected as the first woman of color to the city council of a working class town that has always been a magnet for immigrants.

New Immigrant and Refugee Visions (NIRV) is a collection of ten documentary films by and about new immigrants and refugees. The stories produced provide a unique insider perspective on the integration challenges faced by immigrants and the contributions they make to our culture, economy and social fabric.

To learn about our upcoming events and new resources, be sure to subscribe to our mailing list. And in order to continue our public engagement Screen&Discuss tour to communities across America, we need your support! Please donate to CSFilm today.