ON HAITI | Why the IHRC failed? Ricardo Seitenfus analyzes

On January 12, 2010, 35 seconds were enough to remind us that the exuberant and seductive Caribbean is also a region of great seismic risks. Compared to other natural disasters and taking into account the Gross Domestic Product (GDP) per capita , the number of inhabitants (10 million), the dead (230,000), the wounded (300,000) and the homeless (1 500,000), the Haitian earthquake is the most destructive natural disaster of the modern era.

In the case of Haiti, these risks have been accentuated by population density, by the location of the epicenter and by the extreme precariousness in which the vast majority of the population lives. 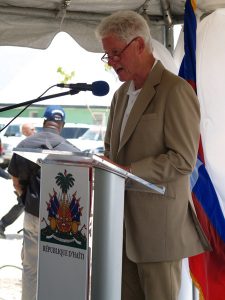 The lack of construction standards, forecast and alert systems, a civil protection service and public awareness of the risks and how to deal with them, multiply the destructive capacity of earthquakes earthen. The scale of the Haitian hecatomb shows that the disaster, before being natural, was socially planned.

By falling on the metropolitan region of Port-au-Prince where 65% of economic activities and 85% of tax revenues are concentrated, it reached the heart of Haiti. The country has lost the equivalent of 120% of its GDP and the state a third of its civil servants; not to mention the destruction of public archives, which constituted an institutional and administrative memory essential for state action. As a result, Haiti has moved from a quasi-state to an absence of a state.

Humanitarian aid arrived immediately, bringing with it plenty of food, medicine, specialized personnel and equipment. The border with the Dominican Republic has been opened and the Malpasse crossing has become a Bonpasse and an important humanitarian corridor.

No one – starting with MINUSTAH – was prepared for disasters, let alone one of this dimension. Faced with the logistical nightmare of having to respond urgently, there was no coordination and planning.

Tons of equipment and hundreds of professionals occupied the airport a few hours after the earthquake. Nevertheless, the victims rightly felt that it was easier for rescuers to travel thousands of kilometers to reach Toussaint Louverture Airport, than the few hundred meters that separated them from the wounded under the rubble.

The amount of relief arriving was such that the airport pandemonium left speechless. However, a decision had been clarified: the aid would be intended first for the many foreigners trapped under the rubble. All countries – without exception – have directed aid to the places where their citizens may be.

Concentrated on the damage that occurred in the capital, the emergency services abandoned the regions around the epicenter and among them, the most populated, the historic city of Léogâne, 80% destroyed.

Far from the spotlight of the international press, these victims were exclusively Haitian. Foreign (Canadian) first aid did not arrive in the city until Sunday, January 17, 2010, five days after the earthquake.