ON HAITI | Was it necessary to make as many amputations after the earthquake?

The earthquake of January 12, 2010 left its aftermath even in the flesh of thousands of people. Some have had their limbs amputated. The number of amputees, although uncertain, provoked strong reactions. Could legs or arms that could have been saved be cut in the name of the emergency? 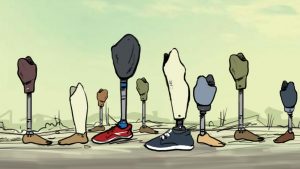 Tuesday January 12, 2010 was not a day like any other for Doctor Georges Beauvoir. This Haitian orthopedist, who has been evolving for years in his field, had no idea that the quiet day he spent could inaugurate weeks of nightmares.

“When the disaster happened,” he explains, “I was at Vivy Mitchell, with friends; we were preparing for exams because I was enrolled in a master’s degree at a Canadian university. We got out, there was not much damage in the area. I took my friends to Pétion-Ville and it was there that I began to see the extent of the damage. So I decided to go to my clinic.”

At the clinic, a first wave of injuries awaits him. “There were a dozen people, with more or less serious injuries. I looked after them, and it wasn’t until around 10 p.m. that I was able to go home.”

“When I arrived,” continues the doctor, “neighbors were waiting for me with their child whose wall had broken his foot, and who was in very bad condition. I came back to the clinic with him, and spent the evening treating him. But he had to go to the hospital. The boy’s parents told me that they could find him a place in a maternity clinic, Climapev. We went there.”

Source: AyiboPost, 09 January 2020, Was it necessary to make as many amputations after the earthquake?