ON HAITI | Did Monsanto want to take advantage of the earthquake to invade the Haitian market? 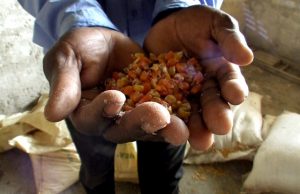 In 2010, after the earthquake that struck Haiti, the American food giant Monsanto donated hundreds of tonnes of seeds to the country. This donation, described as poisoned, created a scandal. Did Monsanto want to take advantage of the earthquake to offer genetically modified seeds and open up a new market?

On June 5, 2010, a few months after the earthquake, thousands of peasants marched through the Central Plateau, from the locality of Papaye to Hinche. They are organizing a march to denounce the offer of the agrifood company Monsanto to the Haitian state: more than 475 metric tonnes of corn seeds.

Straw hats on their heads, red jerseys, banners claiming the country’s autonomy in terms of agriculture, farmers chanted slogans hostile to President René Garcia Préval and Monsanto. Seeds, which had already been distributed, are symbolically burned on the spot. The day before, a documentary retracing the controversial history of the agrifood business had been broadcast in Hinche.

At the origin of these protests, there is a man: Chavannes Jean Baptiste, the leader of the Papaya peasant movement, as well as a handful of other peasant organizations. They denounce the “poisoned gift” of Monsanto.

For several months, the representative of the protesters led a lobbying which led him to Washington. His effort will pay off. “We have practiced peasant agriculture for centuries that is doing well,” he says. “Monsanto seeds would destroy local seed production. It is thanks to our mobilization that the project was stopped.“

Source: AyiboPost, 08 January 2020, Did Monsanto want to take advantage of the earthquake to invade the Haitian market?