ON AFGHANISTAN | Afghan President: No Gender Apartheid Under My Responsibility 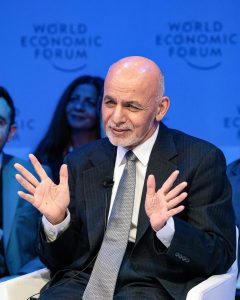 World Economic Forum in Davos, President Ashraf Ghani of Afghanistan reiterated his commitment to women’s rights and human rights. In response to a question on the ongoing talks between the Taliban and the US, he stated that there are some questions that need to be answered, and the top question is gender.

President Ghani also noted that 70% of the Afghan population is under 25 and that “they are not going to be caged,” a reference to how the Taliban treated women as well as young people under their power in the late 90s.

While speaking at Davos, he defended his legacy of the past five years. He said Afghanistan has made significant achievements in various areas, including security. He assured the world leaders that the “Afghan security forces have emerged to be a significant force: our commandos are second to none in the region, our air force has tripled, our commandos and special forces have doubled. We have taken eight districts back from the Taliban.” The training of the security forces, especially the Afghan Air Force and the Afghan Special Forces have continuously been acknowledged as one of the major successes of the US intervention in Afghanistan.

ON MIGRATION | At Poland’s borders, Ukrainians are welcomed while refugees from elsewhere face a growing crackdown

Poland is rushing to build a border wall and taking a harder line against those helping asylum seekers from the Middle East and Africa while welcoming Ukrainians.

Michael Sheridan is one of the best teachers one could hope to have. He has a genuine commitment to facilitating students’ ability to realize their vision, which is backed by a deep understanding of technology and technique. I had the pleasure of hiring Michael to teach over twenty years, and student reviews were always excellent.

ON AFGHANISTAN | What Do We Get Wrong About Afghanistan?

On August 30, 2021, nearly 20 years after they arrived, the last US troops left Afghanistan. Now, some six months later, the world has largely moved on from the story of Afghanistan and the people who remain there in the wake of the US withdrawal and the reinstatement of Taliban control. In this episode of Big World, SIS professor Tazreena Sajjad joins us to discuss what we get wrong about Afghanistan when we only talk about the ways that other nations, including the US, intersect with it.