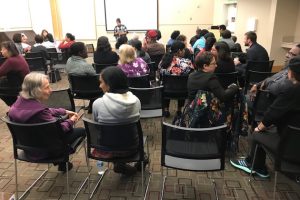 Jo Anderson Cavinta kicks off the event with an introduction.

Students from the Redmond branch’s Talk Time (English conversation) and Citizenship classes were joined by members of the public and Redmond city officials for a screening of Qin Li’s Campaign for a New American and a discussion about the experiences and challenges facing new immigrants in civic engagement.

Osama Hamdan, immigrant and former Redmond City Council Candidate, talked about his experience running for city council. Joining him were City of Redmond Commissioners who discussed formal opportunities within the city and their personal ways of giving back to the community (i.e. church, Open Kitchen, PTA, etc.). The Commissioners engaged in conversation with audience members about how to get involved in and improve their local community, including opportunities that do not require citizenship status.

The event concluded with an optional “field trip” to Redmond city hall where people could learn more about what the city does and when the city council meets, experience the “That Translator” device and participate in a Public Safety Open House. 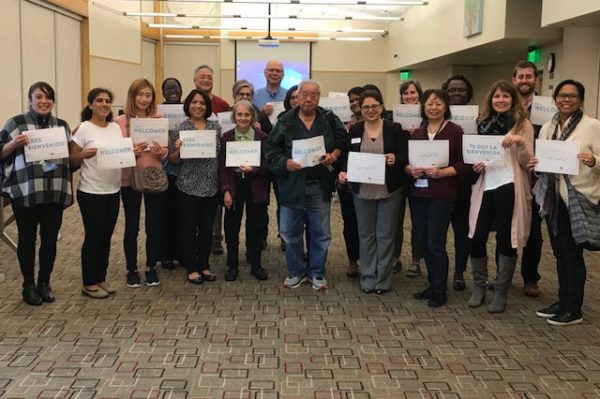 Many thanks to Jo Anderson Cavinta, Alaric Bien, the King County Library System and the Redmond community for hosting and organizing this event.