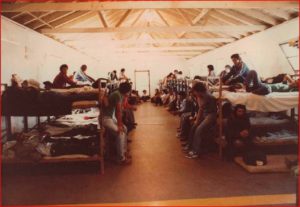 There are 52,000 immigrants in jails and prisons – most for profit – waiting for a hearing to determine whether they can remain in the US.

The United States’ reliance on immigrant detention is not a new phenomenon, nor did it emerge with Donald Trump (though its growth under his administration is staggering). Over the last four decades, a series of emergency stopgaps and bipartisan deals has created a new multibillion-dollar industry built on the incarceration of immigrants.