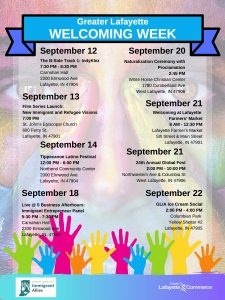 Greater Lafayette Immigrant Allies and Greater Lafayette Commerce combine forces for a series of events from September 13-22 designed to make Greater Lafayette a more welcoming place for all, including immigrants and refugees. They’ll kick off their event with a screening and discussion of films from New Immigrant and Refugee Visions. Starting in September, they will show a NIRV film each second Friday of the month and follow it with a facilitated discussion.