Three films from the New Immigrant and Refugee Visions (NIRV) collection were screened and discussed at Cary Memorial Library in Lexington, MA on May 9, 2019.

NIRV filmmakers Rafael DeLeon (She’s an American Child), Qin Li (Campaign for a New American) and Braulio Tellez Vilches (Lift with Your Heart) introduced the NIRV project and engaged the audience in discussion. The subjects of Braulio’s and Rafael’s films, Jean Appolon and Annabelle, joined the discussion.

Below are excerpts from that discussion. NIRV Screen&Discuss events turn the traditional film screening Q&A on its head.  The filmmakers have developed a series of questions that they ask the audience. The questions ask the audience to reflect on their experience of the films and the broader issues facing immigrants and refugees in the United States.

Discussion Excerpt: Why is immigration a focus of division? 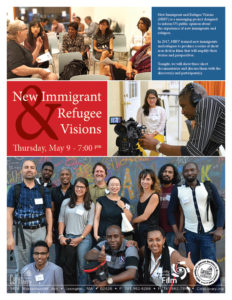 New Immigrant and Refugee Visions in film is coming to
Cary Memorial Library in Lexington
Thursday, May 9, 7-8:30pm

Join us for film screening and dialogue about immigrants and refugees