Immigrants to the United States may share common experiences — like dealing with family separation or learning a new language — but each person’s story is still uniquely her or his own. Each could be a movie. That’s how Mohammad Arifuzzaman sums up his feelings as he considers the premiere of his debut film, “Seeking Settled Ground,” about one of Boston’s first Rohingya refugees.

Although really, “Seeking Settled Ground” isn’t Arifuzzaman’s first film. For months, Arifuzzaman pursued a story about a Lebanese family, almost to its completion. Then his subjects got cold feet.

That’s happened again and again says Michael Sheridan, founder of Community Supported Film, the organization that trained Arifuzzaman and nine other immigrants from Greater Boston on documentary storytelling techniques. Their resulting 10 films about fellow immigrants cover everything from the stress of being a DACA child to being the first woman of color to run for Revere city council. The films screen at Boston Public Library in two different groups on March 31 and April 1. Events like this are the first step in fostering dialogue on a loaded topic, explains Sheridan. 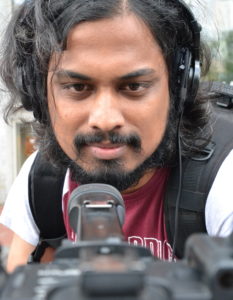 Sheridan has overseen similar projects in Afghanistan and Haiti — training Afghans to create films about other Afghans to broaden and deepen the scope of available media after 9/11, for example. Yet he says this first U.S.-based project has been “unbelievably difficult” to pull off.

Sheridan points to an aggressively anti-immigrant political climate with language like “s***hole” used to refer to certain parts of the world, the threat of deportation, as well as the territorialism between the nonprofits ostensibly serving immigrants’ and refugees’ needs. With all of this, “Obviously people are going to be anxious about being filmed,” says Sheridan.

Arifuzzaman encountered this reluctance even among people he knew well. When a librarian at his Quincy library branch told him about the chance to learn filmmaking through Community Supported Film, Arifuzzaman says his first instinct was to share his own immigration story from Bangladesh, or his community’s story. But the political situation in Bangladesh was not good, he says. “People had some fear. Most don’t want to,” he says.

Arifuzzman went ahead with the New Immigrants and Refugee Visions (NIRV) program, learning how to operate a camera, how to film a scene and how to scout stories overlooked by mainstream media. He didn’t connect with Mohammad Anwar, the subject of “Seeking Settled Ground,” until late in the process.

First they met and just talked. “We wanted to know everything that he has faced,” says Arifuzzaman, though the film avoids a graphic recounting of the persecution and flight of Rohingya Muslims from Myanmar (Burma). Anwar immediately agreed to be filmed. Like many recent immigrants, Anwar didn’t have a lot of activities going on at first, which is challenging for both the newly relocated and the filmmaker. Arifuzzaman follows Anwar to a Roxbury mosque, a halal grocery store, computer classes. “He doesn’t have any friends here. He can’t speak English well. He is isolated. That’s what I’m actually try to do filming, just following him.” 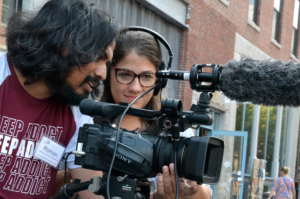 When editor Zayde Buti first went through the footage, he says, “You never saw [Anwar] talking on screen.” Buti wanted more personality to come through. Typically, he assembles from-life cinéma vérité scenes but the final version of “Seeking Settled Ground,” also edited by Devvrat Mishra, includes interviews with Anwar. “So much of his story is written in his face,” says Buti, who edited three other NIRV films. Buti spent so much time watching footage from Anwar’s daily life that he found himself uttering bits of the relatively rare Rohingya language.

Indeed even though Arifuzzaman and Anwar could communicate somewhat in Bengali, there were times when Anwar was speaking in Rohingya to his friends or family by phone. Arifuzzaman had to send clips to his own network in Southern Bangladesh, where other Rohingya have fled and now live, to help translate.

Arifuzzaman calls this process a challenge but the scenes — and the process of getting them — underscore how Anwar starts a new life a world away from where he grew up, worshipped and where some of his family still resides. Anwar took a job at Logan Airport, which denied Arifuzzaman’s request to film. Arifuzzaman wishes he could have included those scenes. Immigrants contribute to the economy and make contributions to their communities, he says. “That’s what I wanted to make known.”

“Seeking Settled Ground” premieres, along with nine other films, as part of Community Supported Film’s New Immigrant and Refugee Visions in Film screenings at Boston Public Library on March 31 and April 1.

Attend the premiere events at the Boston Public Library, March 31 and April 1, 2019.