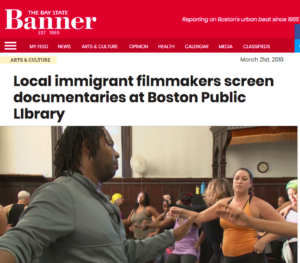 Over the course of 15 weeks, Michael Sheridan, founding director of Community Supported Film, worked with Boston-area immigrant and refugee filmmakers to make documentaries about their experiences and the issues in their communities. The program, New Immigrant and Refugee Visions, resulted in 10 probing documentaries that will be screened at the Boston Public Library’s central branch in Copley Square on Sunday, March 31 and Monday, April 1.

“Community Supported Film comes out of a mission to strengthen local voices and allow folks in underrepresented or misrepresented communities to produce their own stories,” says Sheridan.

The organization has previously run programs in Afghanistan and Haiti, but Sheridan says working in the United States was a very different experience. Many advocacy organizations are overburdened as is and so the onus fell on CSFilm to reach out to the community for applications. In other countries, the students work full time for six weeks, but here, the program became part-time for a longer period.

Of 35 applicants, 10 were chosen for the program. Many did not have film experience, but they all had used narrative in some form and were engaged in community development. Twice a week, the group would meet to learn both storytelling and technical skills to execute their films. Sheridan says, “Here it was much harder for the trainees, because they were having to carry on all the other aspects of their complicated lives as new immigrants, including economic challenges and family concerns.”

Mubarak Mwonge Nsamba emigrated from Uganda to Lowell in 2017. While developing his documentary, he also was dealing with enrolling his children in school. His film, “Pulse of a Dream,” explores why many Ugandans are funneled into health care jobs because they are accessible, regardless of what jobs they worked in Uganda.

One of the problems Nsamba and other filmmakers encountered was hesitancy by people in immigrant communities to talk about their experience. “Because of the current political environment and the stresses on the communities they were trying to document,” says Sheridan, “they went through an incredible number of stories that didn’t pan out.” As a result, Nsamba turned the camera on himself and his family while diving into the issue of new immigrant jobs.

“This program gives us a voice to talk about ourselves, to talk about the communities we live in,” says Nsamba. “I think it’s kind of a platform for us to air out our views.”

The program has inspired many of its participants to continue using film to make change. Nsamba hopes to make a future film about childcare and the challenges of raising children while working multiple jobs in a new country. Abdirahman Abdi, an immigrantfrom Somalia who now lives in Roxbury, is already working on another documentary about gentrification in Dudley Square.

“It’s not just about producing stories but having [the filmmakers] as spokespeople take them into the communities and open up discussion with them,” says Sheridan. “Our mission is to get these into as many communities as possible where people will come together and have their perceptions altered.”

Attend the premiere events at the Boston Public Library, March 31 and April 1, 2019.