In these divisive times these stories have proven to transform minds and motivate action.

We want these films to influence the national immigration debate –  from town halls to the Halls of Congress, in communities both welcoming and resistant to new immigrants.

donate to our national screen and discuss campaign, – and thanks! 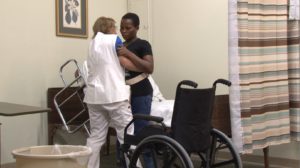 Today’s excerpt is from Mubarak Muwonge Nsamba who emigrated from Uganda in 2017 with his wife Zam and four very cute little kids, well you’ll see for yourself as their all in this excerpt from Mubarak’s entanglement with the american dream.