NIRV Impact: Films by and about immigrants expand minds and motivate action!

Over 600 people were inspired, transformed, and motivated by New Immigrant and Refugee Visions Screen & Discuss events held in multiple states over the last several months. Audiences engaged with films by and about immigrants and told us that they learned new things, felt and thought differently about immigrants, and were motivated to take personal and political action in their communities and nationally.

Read excerpts from audience feedback by clicking on an image below. View it as a 1-page summary (vertical) or read more comments here. And see how your family heritage matches up to the NIRV audiences. 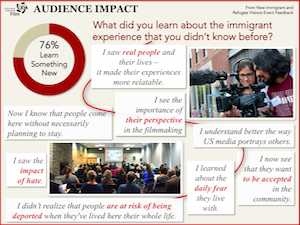 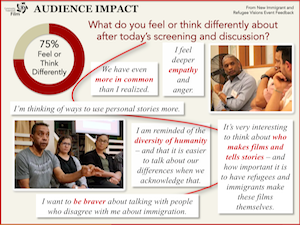 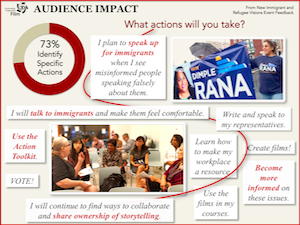 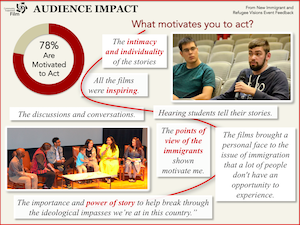 View it as a 1-page summary-(horizontal) and read more comments here.

Contribute to CSFilm to broaden the impact of these important immigrant perspectives in film.

We focused our fall Screen & Discuss events on regions with substantial immigrant populations, legislative behavior that suggested a resistance to immigrants and divided public opinion. Regardless of election outcomes, our intent was to encourage the voting public and future representatives to recognize the importance of listening to local voices when crafting policy affecting their communities.

Congratulations to all of the work done across the country to persuade voters to elect representatives that will hopefully promote policies that respect human dignity, international immigration and refugee law and recognize the positive and essential role immigrants play in our community. Congratulations specifically to those in the districts where we were invited to Screen & Discuss the NIRV films and where more progressive policy makers were elected – the 2nd district in Minneapolis-St. Paul and the 19th district in the mid-Hudson Valley, New York.

Want to see transformation in your community? Organize your own Screen & Discuss event and watch these powerful, intimate, insider stories of immigrant life in America stimulate lively discussion and transformative action.

Think more people need to hear and see real immigrant stories? Your financial support is critical to the ongoing NIRV Screen & Discuss National Tour in 2019. Join individuals & organizations working to amplify local voices in the national conversation about immigration in the USA! DONATE

Need ideas for how to talk about immigration and take action? Use our Action Toolkit and Teaching Resources to guide discussion, enhance learning, and identify tangible actions you can take to strengthen communities and the country.

Want to stay informed on immigrant issues and NIRV impact? Subscribe to the CSFilm mailing list and follow us on social media to stay updated on upcoming events and increased impact. Thanks for being the “community” in Community Supported Film!