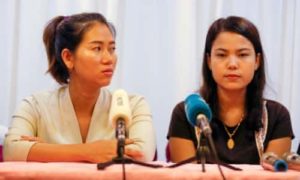 “Aung San Suu Kyi used to give speeches before I even understood English, and I would always listen to them because I knew the leader of the country was talking,” said Pan Ei Mon, wife of the reporter Wa Lone, as she addressed the media in Yangon. “I loved her and respected her so much, but she said our husbands were not reporters because they violated the nation’s secrets, and I am very devastated by that answer.”

Pan Ei Mon was referring to an interview that Myanmar’s civilian leader gave to the Japanese broadcaster NHK in June, during which she said the two reporters “were arrested because they broke the official secrets act”.