Great turnout for NIRV films at Museum of Fine Arts

Thank you to everyone (~200 of you) who joined us at the Museum of Fine Arts in Boston on Memorial Day for screening of New Immigrant and Refugee Visions films and discussion with filmmakers and film subjects. 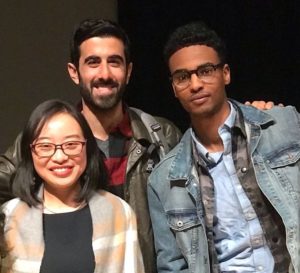 Community Supported Film (CSFilm) Founder and Director Michael Sheridan opened the event with a presentation about the mission of CSFilm, to strengthen communities by amplifying local voices, and an introduction to the New Immigrant and Refugee Visions (NIRV) project. Two NIRV films were then screened:  Campaign for a New American by Qin Li and Worlds Apart at Home by Abdirahman Abdi. The films were followed by discussion with the audience.

It was a powerful experience to share the work of our immigrant filmmakers with so many new neighbors visiting the Museum of Fine Arts‘s Open House. The feedback we received from newcomers to the CSFilm mission and the NIRV project was incredibly validating and encouraging. Selected comments:

– “I feel great and honored to have witnessed this new initiative to include and validate immigrants.”

– “[I learned] that your wonderful program exists!”

– “I think this work makes a difference in everyone’s lives. We need more!”

– “…reaffirms the passion and promise we all have; pleased that there are ways for that to grow and inform us.”

Our goals with these Screen & Discuss events are to generate new thinking and understanding and to motivate people to take action. Based on the feedback we received in written form and in conversations visitors had with CSFilm and MFA staff, we’ve succeeded! Selected comments: 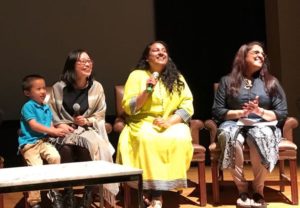 Visitors engage with NIRV filmmakers and films subjects after the event.

At the close of the event, many of you joined the panelists and the eight NIRV filmmakers present to talk further. This post-event interest and engagement was another example to us of how important these films and open discussion can be for expanding minds and communities. You can can organize a Screen & Discuss event in your community too! It is one of many actions you can take. You will find more ideas for action and lots of resources for learning more about the facts and ways you can engage in our detailed Action Toolkit on our website.

To learn about our upcoming events and new resources, be sure to subscribe to our mailing list. And in order to plan our public engagement Screen & Discuss Tour taking these films and discussions to cities around America, we need your support! Please donate to CSFilm today.

Many thanks to our friends, our financial supporters, and to Jen Leclerc and Linda Apple of the Museum of Fine Arts for believing in Community Supported Film and inviting us to include the NIRV films in their Open House programming! 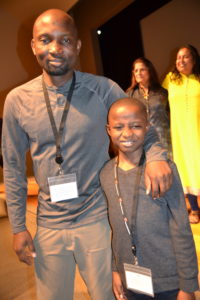 NIRV filmmaker Mubarak Muwonge Nsamba of Uganda, and his son. 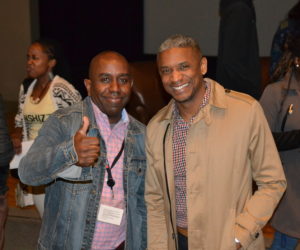