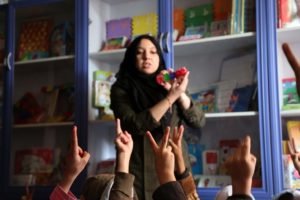 In Afghanistan, access to education has been a successful driver of development over the last seventeen years.
In 2001, one million children–almost none of them girls– were enrolled in 3,400 schools. In 2015, there was a nine-fold increase in enrolment with more than eight million students in 16,400 schools, of whom almost 40 percent were girls.

While it’s encouraging to see progress in access to education, the quality and safety of the school facilities are not as reassuring : One of every two students in Afghanistan learns in overcrowded temporary shelters or in fragile outdoor conditions.

If an earthquake were to hit Afghanistan on a school day, 5 million students would be affected.

In the past, addressing infrastructure resilience has been a challenge since information regarding current and future disaster and climate risk has been extremely limited and fragmented.

Compounded by decades of conflict, this has undermined Afghanistan’s ability to cope and effectively respond to natural disasters.

Thanks to its National Education Strategic Plan III (NESP), the Government has now made it a priority to provide quality education and respond to the growing demand for new and safe school facilities.

Between 2015-2030, the plan aims to reach 100 percent enrollment by building 20,000 new schools. The World Bank and other development partners are supporting this effort through the Afghanistan Reconstruction Trust Fund (ARTF) by incorporating risks in current and future national and Bank investments.

The number of schools without classroom buildings, highlighting the current deficit in school infrastructure and the significant increase in school construction required to meet the current NESP III target for full enrolment and provision of school buildings at all schools by 2030.

There is an estimated shortage of 20,000 new schools (2015-2030) that require construction to meet expected demand:
Of the 16,400 existing schools in Afghanistan, a vast majority are single-story masonry school buildings, that are highly vulnerable to earthquakes. Nearly 90 percent of existing schools were built by the community using unskilled labor and inexperienced construction management
School site selection is often carried out without appropriate site surveys, which leads to schools being constructed on the least valuable and most exposed land
The quality of construction is one of the main problems: building designs are often not well communicated from technical experts to construction contractors and don’t appear to be well implemented on-site
Similarly, safety issues pose significant limitations to conduct a proper inventory and inspection of school infrastructure as well as implement training and engineers
With a large building stock of vulnerable school buildings, there is currently no evidence of any existing retrofitting practices for schools in Afghanistan

The World Bank and other development partners are proactively supporting the Government of Afghanistan in addressing these challenges. In 2017, a national multi-hazard risk assessment and risk profiles were completed. These tools are the first of its kind in a fragile state and have already contributed to raising awareness on current and future disaster risk in Afghanistan.

Furthermore, with support from the Global Program for Safer Schools (GPSS) and the Global Facility for Disaster Reduction and Recovery (GFDRR), and in close collaboration with the Afghanistan National Disaster Management Authority (ANDMA) and the Ministry of Education, the World Bank is now conducting a disaster risk analysis for the education sector, which will provide training, recommendations on guidelines for safer (new) construction, as well as retrofitting options (if any) for existing schools to reach the minimum life-safety standards.