ON THE MEDIA: Documentaries loved differently than narrative films, but pose problems with accuracy 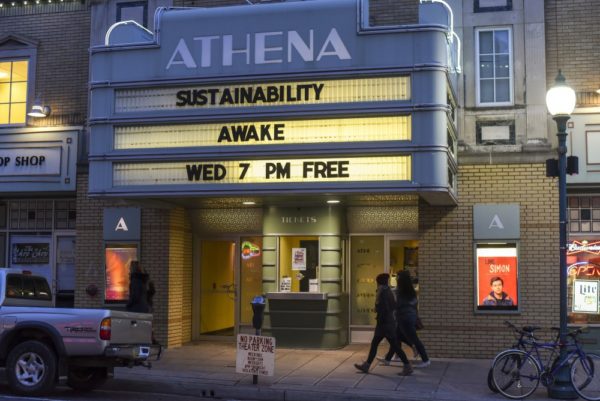 Many documentaries are shown at the Athena Cinema, such as “Awake,” a documentary about protesters at Standing Rock Sioux Reservation as part of the Sustainability Series.

Sam Houtchens has watched more than 100 documentaries. She thinks they are a “safer bet” to learn about issues than reading articles online.

“People watch them to educate themselves over different topics because when you read about topics, especially social issue topics, it’s hard to put a face to it,” Houtchens, vice president of the Rough Cut Collective, said.

Documentaries can alter reality by giving more on one side of an argument and using filmmaking elements to leave out certain information.

Houtchens, a sophomore studying integrated media, enjoyed Super Size Me, a film exploring the impact of America’s fast food industry, because it goes beyond factual information. The documentary follows a man who eats McDonald’s for every meal over the course of a month. His first-person account is unrefined and real, she said.

Yang Miller, technical director and audience experience coordinator at the Athena Cinema, said people are captivated by documentaries because they are true stories.

“You’re seeing a different way of life,” he said.

Some might even showcase events, people or issues that audiences are familiar with in their own lives. Miller’s documentary, A Midwestern Morning, chronicled the life of his artist friend who lived in Athens and passed away from stomach cancer.

Miller said documentaries should utilize filmmaking elements to make the story as engaging as possible. But to a certain extent, he questions if it’s ethical to rearrange footage and edit out interview segments.

Thomas Hayes, a film lecturer in the College of Fine Arts, said making a documentary involves years of research and inevitably, makes the filmmaker a “subjectary expert” on the topic. Passion and engagement drive documentary projects, not their potential to generate revenue.

He describes documentaries as “evolutionary experiences” because a filmmaker will often wind up with a different film than what they expected from the start. If the documentary makers end up with the product they had envisioned at the beginning, they didn’t learn anything, he said.

Hayes took on many production roles for his documentary Refugee Road by producing, directing and editing the story. He tries to make his work as accurate as possible with plenty of research and reporting. The film examines the resettlement of Southeast Asian refugees, so he talked to many subjects to gather personal stories.

“Any time you make a cut, you’re distorting reality,” he said.

Miller said documentary filmmakers may only have a general idea of where they want the documentary to go before they begin shooting footage. The script could be constructed afterward because they wouldn’t know what people will say during the interviews. People’s reactions can change depending on if they’re actively conscious of cameras in the room or not. The editing room serves an important role because the filmmaking elements don’t come together before that point.

Documentaries should focus on the main topic and, more or less, reach the point without including too much unnecessary information.

Miller said some television shows and other forms of media have started using a documentary style of filmmaking. They want to achieve a “quick and dirty feel” with hand-held cameras, but it leaves confusion among audience members. When watching actual documentaries, some people might wonder if they are being manipulated.

It can be easy for documentaries to be bias because they push a certain point of view about an issue and include evidence that supports it, Houtchens said.

“You could not agree with a topic and then watch a really good documentary on that and be completely pursued the other way because they have uses of (effects),” Houtchens said. “They’re showing you what they want you to see.”

But not all documentaries focus on one side of the debate. Some will just lay out their arguments and let audience members form their own opinions.

“Good documentaries are good at giving you facts and giving you truth, and then letting it be open-ended,” Houtchens said.