ON MIGRATION: She fled Liberia’s civil war 24 years ago. Now Trump wants her to go back 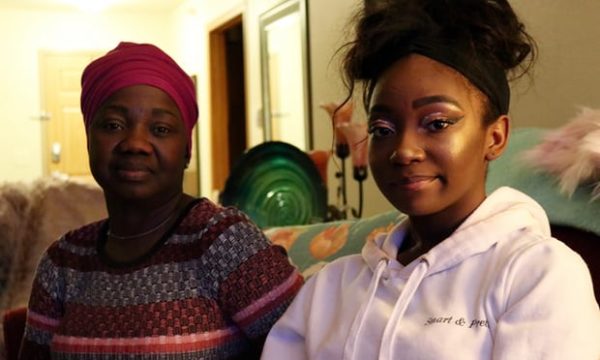 Gabrielle Gworlekaju, right, with her mother, Magdelene Menyongaro, at home in the suburbs of Minneapolis. Photograph: Jared Goyette

Gabrielle Gworlekaju, 16, is a sophomore in high school in Minnesota, a cheerleader and an A student. She wants to pursue a career in medicine and, in about a year’s time, she’ll begin the process of choosing a university.

There’s one person she leans on more than most for advice in such decisions – her mother, Magdalene Menyongaro, 48, who came to the US from Liberia 24 years ago, fleeing the country’s civil war. Gworlekaju and Menyongaro live in a modest apartment in the north-west suburbs of Minneapolis, an area which has the largest concentration of Liberians in the country. The hub of the Liberian community is in Brooklyn Park, a city of about 79,000 people that has roughly 52 Liberian churches and as many as 7,000 Liberian residents. Gabrielle’s father, also Liberian, died in a car wreck about three years ago when she and her parents lived in another state. In fact, the accident is what inspired Gabriel to want to pursue medicine.

But Gworlekaju, who was born in the US, is afraid that by the time college acceptance letters start arriving, her mom won’t be around to read them – at least not in person. Menyongaro is one of roughly 4,000 Liberians in the US who hold a protected immigration status known as Deferred Enforced Departure (DED).

Many Liberians have been covered by either Temporary Protected Status (TPS) or DED from the US government since 1991, the power of which rests with the office of the president.

But last Tuesday, after months of fearful speculation and the program set to expire on 31 March, the Trump administration announced it plans to end DED. Trump will allow beneficiaries one year to get their affairs in order before they have to leave the country voluntarily or face deportation.

“It’s ridiculous,” Gworlekaju told the Guardian. “I would be so hurt if my mom were to leave. A year from now I’ll be deciding on what colleges to go to, and I need my mom to help me make those decisions. I need her here, I need her with me.”

George W Bush granted DED to Liberians who, like Menyongaro, had arrived before October 2002 and whose TPS was expiring in 2007. The program was later extended by Obama. In practice, as Patrice Lawrence, the national policy and advocacy director of the advocacy group UndocuBlack Network, explained in national press call many DED holders have been in the country for more than two decades.

Menyongaro works as a caretaker for senior citizens, making her part of the local healthcare industry that has come to rely on Liberian immigrants. She works the early shift, from 7am to 3pm, so she can be home when her daughter gets off school every day. She cooks her supper (often potato greens, a popular Liberian rice dish) and makes sure she gets her homework done. Like many Liberian DED holders across the country – activists say the largest groups live in Minnesota, New York, New Jersey, Pennsylvania, North Carolina and Rhode Island – Menyongaro had feared the worst. But, more than just the program ending, she had feared an abrupt expiry, maybe bringing immigration agents knocking on her door as early as Monday.

So when she learned that instead she would have another year to work and live in the US and be with her daughter, the relief actually felt like good news.

“I was going to be worried about my daughter, who was going to take care of her if it got to the point where people were going to have to leave the country? So, for now, I’m hopeful because at least I have something to work with,” she told the Guardian.

Her relief was echoed by Jackson George, Liberia’s honorary consul general for the midwest.

“I think everybody was on edge, just because most Liberians are not ready to return home. This result is good for Liberians in the diaspora,” he said.

Most activists, however, are appalled at Trump’s decision.

“We condemn this. Many have been here for more than 25 years. They don’t know Liberia any more. They have raised their families here,” said Wynfred Russell, director of strategic partnerships at the community organization African Career and Resources Inc.

Still, he understood why many Liberian immigrant communities were celebrating last Tuesday.

“We don’t want to disappoint folks or throw water on this excitement. We’ll let people go ahead, they need to celebrate and exhale for a little bit,” he said. After the short-term euphoria wears off, his group will contact people again to explain the detailed implications of the news, he said.

For Russell and others pushing for a way for DED holders to stay in the country they now call home, the attention turns to Congress, where there are bills in the House and Senate that could provide a more lasting solution. The measures do have some bipartisan support. In Minnesota for example, the Republican representative Erik Paulsen teamed up Democrats in the state’s congressional delegation to urge the White House to extend the program. Last Thursday, Minnesota’s governor, Mark Dayton, a Democrat, wrote the president a public letter asking him to reconsider his decision, saying many DED holders “are part of the social fabric of Minnesota”.

However, the Trump administration has so far been cold to the idea of extending TPS, a similar program, ending it for at least four countries, including Haiti, El Salvador and Nicaragua.

That a similar outcome might be likely for Liberian DED holders in a year is a reality that Menyongaro and Gworlekaju are dealing with, right now, by simply trying not to think about it. And by willing themselves to be hopeful.

If she does have to leave the country, Menyongaro plans to send her daughter to live with other relatives in the US – not the worst outcome, but still a heartbreaking rift. She hopes it does not come to that.

“The way I take care of her and the way I want her to grow up, I don’t know if somebody else can do that,” she explained. “And it’s my prayer that God will not let that separation happen. God cannot do that. He already taking her father away. And he cannot take the mom away like that.”

While her daughter looked away anxiously, the mother pressed her lips into a stoical smile.

“I don’t think that will happen,” she said.