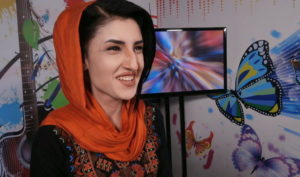 KABUL: When Hamid Samar announced two positions for TV presenters for a female program in Afghanistan’s eastern Jalalabad city over a year ago, only two women applied for the job.
Both had one key condition; while presenting the program they would only appear in “chadari,” the all-enveloping burqa that also covers the face and is worn by many women in Afghanistan’s countryside.
Samar was shocked to find that after 16 years of US-led war that has brought unprecedented freedom, especially for women in Afghanistan, many women in rural areas still have to abide by traditional values and cultural restrictions — they fear that violating these is a risk to their lives.
He and his mother, who has written extensively on women’s rights during her more than 35 years as a campaigner for Afghan women, thought running such a program with women wearing chadari would only draw international attention to the “negative” aspects of women’s lives in Afghanistan.
Samar, 36, who has worked in the past in the private sector including in the production industry, wanted to promote women’s rights by depicting the “positive” side of life in Afghanistan, but did not know how.
His mother suggested to him that with the nearly 40 television stations that have mushroomed since the Taliban’s ousting and with their focus entirely on men, it was time to set up a network dedicated to women to highlight their gains and help them become assertive and campaign for their rights as enshrined in Islam.
So he launched “Zan” (Woman) TV eight months back in Kabul.
“In the past 16 years (since the Taliban’s fall), one thing is crystal clear — that the (Afghan) media have worked more to promote men’s capacity,” Samar told Arab News recently in his network’s office.
“Most of the media in society have played the role of making leaders such as politicians and lawmakers and we wanted to create a similar tribune solely for women,” he said.
His campaign to launch the first TV station for women in Afghanistan became the start of a fight for defending his reputation in a society where some clerics and even government security forces suspected that he was undermining cultural values and Islam through the network.
Even women applying to work for the station initially were accompanied by their parents to make sure that it was a “safe and clean environment.”
“The perception initially was that this is a center for bad deeds, for provoking girls against their fathers and women against their husbands. There were some pro-government ulema (Muslim scholars) who even said that its (the TV station’s) ‘founder is a Jew,’ there was lots of propaganda,” recalls Samar.
“Fortunately, after watching the contents of the program, they realized that this TV station is the most positive one compared to others,” he said.
Now Samar, unlike the owners of many TV stations here, does not use an armored vehicle for his daily needs and armed bodyguards for his protection.
His team of 48 women employees include his sister, sister-in-law and mother, who is also a member of the TV station’s board.
Having close family female members working in TV has helped him to hire women easily as this has given other families assurance about the safety and modesty of their next of kin.
Wearing colorful headscarves and putting on mild makeup, many of the army of employees — from presenters to camerawomen and producers — are university graduates.
Khalida Rashid, who has a degree from a journalism faculty, explained that part of the challenge for women journalists in Afghanistan is that officials are not as accessible to women as they are to men media personnel.
“There are challenges, such as safety, for us. When you raise the voice of women in a traditional society like Afghanistan that in itself is a challenge. The work of women journalists in Afghanistan is a risky one, but me and my colleagues have managed to confront the challenges …” she told Arab News.
Like other TV stations here, Zan runs cooking, entertainment, political discussions, news and analytical shows, but with the focus mostly on women.
One of its main programs is “Islam and Society,” broadcast live for an hour each day. It is directed by Armaghan Malikzada, a 23- year-old woman who has a degree in Islamic studies.
She invites a cleric to explain the rights of women stipulated in Islam and airs questions from callers who include men and women.
“The feedback we get from people is positive and encouraging. We are informing Afghan women what their rights are under Islam and that they should be strong to defend their rights,” she said.
The entertainment part of the TV schedule includes foreign and local movies as well as songs and entertainment for families. Krishma Naz, who is in charge of the program, says the station censors those parts of the songs and movies that are “indecent.”
Samar says that he has managed to keep his station out of the factional, religious and tribal conflict that have become part of the daily fight among politicians.
As the country hopes to start peace talks with the Taliban in coming months, Samar’s next show will be on women’s role in the negotiations. That will be followed by another item on parliamentary elections set for later this year and for the presidential one slated for the coming year, when he and his colleagues hope a woman will also stand for office.
One of his occasional disagreements with female family members at home is over switching between Zan TV and other stations.