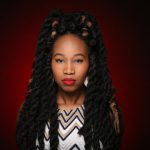 Christine Souffrant Ntim, the founder of the Haiti Tech Summit, is a force to be reckoned with. This Haitian-American entrepreneur is making waves in the tech industry, who builds startup ecosystems in emerging markets. She is the Director of Startup Grind Dubai Powered by Google for Entrepreneurs and a partner at the GlobalStartupEcosystem.com which hosts the largest digital online accelerator program in the world- graduating over 1000+ companies across 190+ countries a year in Africa, Caribbean, Latin America, Middle East, Asia, Europe.

Karen Andre is the former White House Liaison for the U.S. Department of Housing and Urban Development. She’s dedicated her life to public service and advocacy and has an active hand in organizing Haitian-American communities all over the country. She’s been named one of South Florida’s 50 Most Powerful Black Professionals, an inductee in the Haitian Roundtable’s 1804 List of Haitian-American Changemakers and was named one of 20 South Florida Freedom Sisters by the Ford Motor Company.

Karine Jean Pierre is the Senior Advisor and National Spokesman for MoveOn.org. The former Obama aide is a political commentator. Her professional experience has ranged widely from presidential campaigns to grassroots activism to local politics, to working in the White House. Jean-Pierre joined the Columbia University faculty in 2014 where she teaches a course at the School of International and Public Affairs.

Kreyol Essence founder Yve-Car Momperousse is taking the beauty industry by storm. The Haitian American beauty mogul in the making launched her company after a harrowing hair experience at the beauty parlor. Not only has her hair care products brought one of Haiti’s “liquid gold” ingredients to mainstream America, it has also provided dozens of Haitians with jobs.