ON MIGRATION: Where millennials stand on immigration

By David Brancaccio and Janet Nguyen, February 5, 2018, for Marketplace 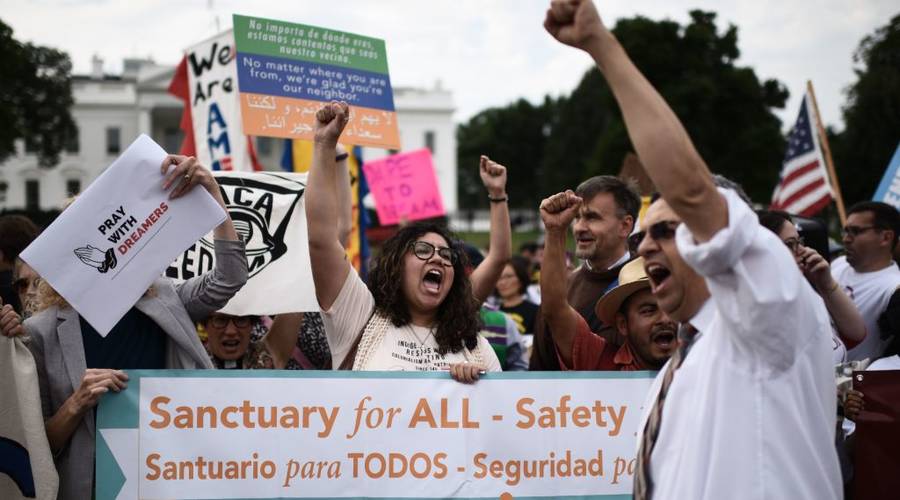 Immigrants and supporters demonstrate during a rally in support of the Deferred Action for Childhood Arrivals (DACA) in front of the White House on September 5, 2017 in Washington DC.
US President Donald Trump has rescinded the program, ending amnesty for 800,000 young immigrants brought to the US illegally as minors and who are largely integrated into US society. US Attorney General Jeff Sessions made the announcement in a press conference at the Justice Department.
/ AFP PHOTO / Eric BARADAT (Photo credit should read ERIC BARADAT/AFP/Getty Images)

The Trump administration’s hard-line stance on immigration over the past year has led to fierce disagreement between Republicans and Democrats, even playing a major role in January’s government shutdown.

The big reason Democrats refused to pass a federal spending bill: In late 2017, President Donald Trump said he was ending the Deferred Action for Childhood Arrivals program, which allows unauthorized immigrants who arrived in the U.S. as children to avoid deportation and obtain two-year renewable work authorizations.

The Trump administration recently released a framework to resolve the issue, but it wants $25 billion for a border wall and a significant reduction in legal immigration in exchange.

While there are clear political lines that have been drawn on the issue of immigration, there are some demographic ones as well. GenForward, an ongoing study that looks at how 18- to 34-year-olds across different racial groups think about major societal issues, has surveyed millennials about the topic.

Here are some of the results:

Millennials across racial and ethnic lines overwhelmingly support citizenship for those who meet DACA’s eligibility requirements, which include those who came to the U.S. while younger than 16 and who were younger than 31 as of June 15, 2012.

Millennials also strongly support other immigration policies aside from DACA.

For example, more than 80 percent think there should be a pathway to citizenship for all law-abiding immigrants, along with undocumented immigrants who serve in the U.S. military and receive an honorable discharge.

The rights of unauthorized immigrants

However, millennial attitudes start to diverge when it comes to more restrictive actions, like identifying and deporting immigrants “currently living in this country illegally.”

“This is where we see kind of a contradiction,” pointed out Cathy Cohen, the study’s lead investigator.

Meanwhile, Asian-Americans and Latinos — whom GenForward refers to as Latinxs — are the least likely to support a proposal like this.

“Asian-Americans and Latinxs much more likely to be an immigrant, have a close friend or relative that is a recent immigrant, and speak a language other English at home than African-Americans or whites,” according to the survey. “These differences are sometimes, though not always, seemingly correlated with support or opposition for specific policy proposals.”

These groups diverge even more when it comes to the question of whether immigrants are “taking jobs away from people who were born in the United States.”

“I think it has to do with the surroundings and the context in which you find yourself and your proximity to other individuals who in fact are immigrants,” Cohen said.

Some of that context: the unemployment rate for African-Americans, she noted.

“If you’re a young African-American person trying to find a job, and you’re finding difficulty securing a job, you also are hearing the narratives that there’s this group out there — this ‘other’ — that may be taking jobs away from you,” Cohen said. “And that kind of individual individualized narrative is often kind of easier to digest than a structural narrative that would say years of neoliberalism and globalization have restructured the economies that makes it much more difficult to find kind of living-wage jobs that can be secured in African-American communities.”