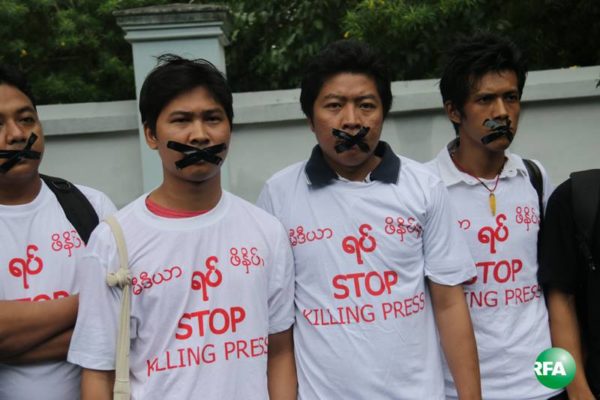 The two disappeared on 12 December 2017. Two weeks later, Myanmar authorities revealed that they had arrested and detained the journalists, alleging that they had “illegally acquired information with the intention to share it with foreign media.”

The police claimed the journalists obtained military documents containing information about “security force numbers and the amount of ammunition used in a wave of attacks in late August” in Rakhine State.

The conflict in Rakhine has led to the displacement of more 600,000 Rohingya Muslims. Many fled to nearby Bangladesh, seeking protection in Rohingya refugee camps. The Myanmar government does not recognize Myanmar-born Rohingya people as citizens, as it does with the country’s other ethnic minorities.

Alongside the refugees, numerous foreign governments and intergovernmental organizations (including the UN High Commission on Refugees) have demanded and pressured the Myanmar government to stop radical Buddhist nationalists from attacking Rohingya villages and to ensure safe return for Rohingyas who have fled the country.

Image from the Facebook page of ‘Protection for Journalists Committee’ – Myanmar

For its part, the Myanmar government blames the pro-Rohingya armed group Arakan Rohingya Salvation Army for instigating the conflict in Rakhine.

Following the escalation of clashes in August 2017, the government imposed strict controls over the flow of information about what’s happening on the ground in Rakhine. Some journalists were only given a restricted tour of the affected villages. Local authorities even prevented Yanghee Lee, the UN special rapporteur on the human rights situation in Myanmar, from fulfilling her mandate by barring her from entering the country.

In an official report, Lee said:

“By not giving me access to Myanmar and by refusing to cooperate with the mandate, my task is made that much more difficult, but I will continue to obtain first-hand accounts from victims and witnesses of human rights violations by all means possible, including by visiting neighbouring countries where some have fled.”

It was in this politically fraught and high-risk context that the two Reuters journalists found themselves investigating a mass grave that was discovered in southern Maungdaw Township.

Their search for information about the mass killing, which took place in Inn Din village, was seen by authorities as a violation of the British colonial-era Official Secrets Act. The two will face up to 14 years imprisonment if found guilty by the court.

News about their arrest was quickly denounced by various groups as another sign of heavy restrictions on press freedom in Myanmar.

The International Federation of Journalists criticized the use of a colonial-era law to attack journalists:

…placing press freedom back to colonial times and charging journalists with laws dating back to 1923 are actions of an undemocratic state.

The International Press Institute bemoaned the reversal of democratic reforms in a country where military rule was supposedly defeated in 2015:

If Myanmar is serious about democratic reforms, it must accept the right of journalists to work freely and report on topics that make those in power uncomfortable.

The free expression advocacy group Article 19 denounced the failure of the ruling party, the National League for Democracy (NLD), to uphold the right to speech despite the fact that it used to be the leading force of the democracy movement during the military dictatorship:

NLD government has demonstrated an alarming disregard for the freedom of expression and fostered a chilling environment for independent media throughout the country.

And the Southeast Asian Press Alliance urged the NLD-led government to be more transparent:

Instead of guaranteeing the people’s right to know and the journalists’ safety, the authorities have not been transparent in their decision-making and have further restricted journalists’ access since the conflict escalated in late August.

Reuters reported that some Myanmar netizens have accused the detained journalists of “selling the country” to foreigners, and thus acting as traitors. But the report also mentioned that friends and supporters of Wa Lone and Kyaw Soe Oo are using social media to deny these claims, while praising the charity and volunteer work of the two.

Beyond the Official Secrets Act, this case highlights the need to amend other laws being used to stifle free speech, including the Unlawful Associations Act and Article 66(d), otherwise known as the defamation law. Both were passed during the previous military regime.