ON THE MEDIA: Global unhappiness with the news media is high. In the U.S. (surprise!) partisanship drives what people think about the media

In the U.S., supporting the party in power correlates with thinking the media does a terrible job. The opposite is true in nearly every other country surveyed.

People across 38 different countries largely say they want a news media that covers political issues in a way that doesn’t favor one political party or another, according to a global study by Pew Research published Thursday. But in many of these countries Pew studied, partisan divides over whether news organizations cover politics fairly rule attitudes toward the media.

Among the four issues tested, evaluations are most negative when it comes to whether news organizations are doing a good job at reporting different positions on political issues fairly. Globally, a median of only about half (52%) think their news media are performing well in this domain.

Regionally, medians of less than half approve in the Middle East (46%), Europe (45%) and Latin America (42%). Still, majorities in sub-Saharan Africa (69%) and the Asia-Pacific (65%) praise their media’s performance…

An individual’s political orientation tends to be one of the strongest factors underlying attitudes about the news media, more so than age, education or gender.

In the U.S., 52 percent said they thought news organizations don’t do well reporting political issues fairly. The U.S. didn’t have the highest levels of dissatisfaction among the countries Pew surveyed, though: In Greece that number is 80 percent; in South Korea, 72 percent. These two countries consistently ranked highest in media dissatisfaction: Greece and South Korea were the only two in Pew’s report in which the majority of people didn’t even think news organizations were doing a good job covering important news events (Greece 57 percent; South Korea 55 percent).

But when it comes to partisanship, the U.S. takes the cake. In only the U.S and Israel are people who support the governing party more likely to be unhappy with the media:

The gap is largest in the U.S., where 24% of Republicans are mostly satisfied news consumers, compared with 58% of people who do not identify with the Republican Party, a 34-point difference.

The opposite is largely true for the other countries Pew studied. In Hungary, for instance,supporters of the ruling Christian Democratic People’s Party are 20 percentage points more likely to be satisfied with news coverage than non-supporters.

Among the people surveyed by Pew, those who said they felt it was “never acceptable” for news media to favor a specific political party were more likely to say media in their countries weren’t reporting on politics fairly, compared to those who said they felt it was “sometimes acceptable” for news organizations to favor one political party. Again, the U.S. has the largest gap between those two groups (57 percent of those who are most rigid about whether news media should be allowed to favor one party over another are unhappy with how the media is doing, compared to 31 percent of those who think it’s sometimes acceptable for media to favor a party): 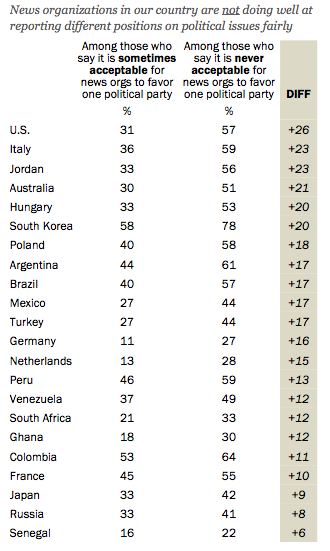 This yawning partisan divide aligns with another Pew report from last summer, which found that 89 percent of Democrats said journalists’ role keeping an eye on public officials was critical, but just 42 percent of Republicans felt the same. It was the largest partisan gap since Pew began asking the question in 1985.

In addition to all this partisanship and unease, Thursday’s Pew report also found a few other notable news media consumption trends worldwide: 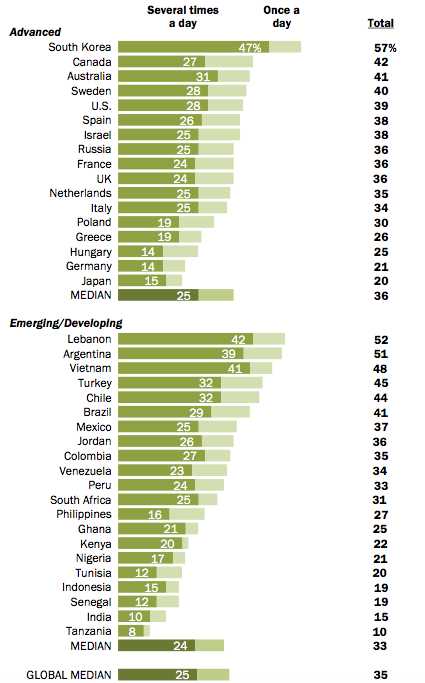 Pew conducted its survey with 41,953 respondents across 38 countries from February to May of 2017. You can read their full report here.