ON ECONOMIC AND SOCIAL DEVELOPMENT: Investors make a bet to lift Boston-area neighborhood out of poverty

By Dan Gorenstein, December 4, 2017, for Marketplace 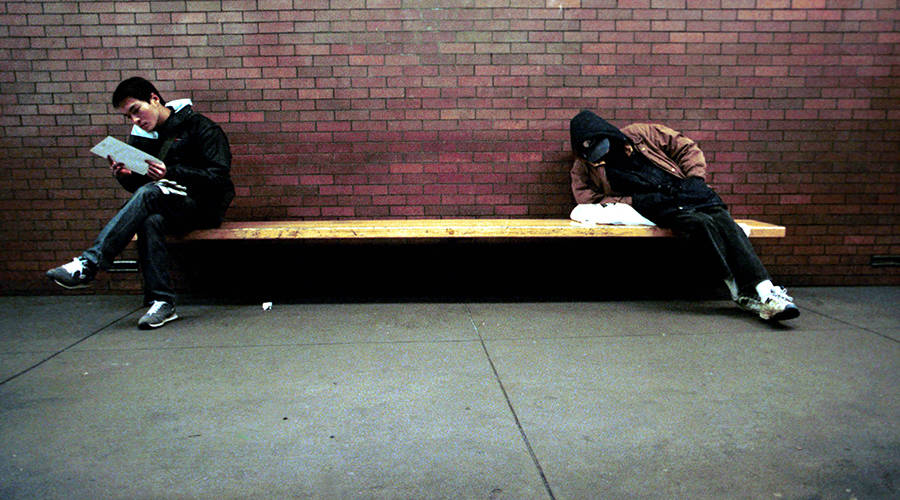 A homeless man sleeps while a subway rider waits for the train at a subway stop in Boston. – Darren McCollester/Newsmakers

How do you raise the standard of living in the poorest neighborhoods in the country?

That’s what community developers, typically nonprofits that build and finance affordable housing, have tried to do over the last few decades. And yet, despite more than $100 billion going into affordable housing and commercial projects every year, many of these communities remain stuck in poverty. A big part of the problem is a lack of cash, specifically the kind of private investment that attracts new residents and jobs.

Terri Englen and her husband Joseph, both 68, know what it’s like to live in tough neighborhoods. For more than four decades, the couple has lived in Chelsea, Massachusetts, right across the harbor from Boston. The location drew them there, close enough for the working couple to get to and from their jobs.

But for years their neighborhood, about eight square blocks, stood out for all the wrong reasons. Abandoned cinder block, ramshackle factories at the bottom of the hill, over-crowded multifamily homes at the top and in the middle an illegal garbage dump.

“People would go by in their cars and throw whatever, anything,” Terry said.

But in 2006, things began to change. Developers built affordable apartments. In 2010, they converted a historic factory into market-rate lofts that back then went for about $1,400 per month and today run nearly $1,800. The area even got a name: the Box District.

“It really [wasn’t] enough to move the market to the point where investment is available and conventionally used,” she said.

This problem has stumped community developers for decades. But two local nonprofits think they’ve hit on something: They’ve created a private equity fund.

“We’re trying to foster and promote you can make a reasonable return and have a positive impact in these neighborhoods,” said Joe Flatley, president of the Massachusetts Housing Investment Corp.

Since 2013, this group, working with the Conservation Law Foundation, has raised $22 million from investors like philanthropists, socially minded banks and a hospital, the Boston Medical Center, for residential and commercial projects around Boston.

The Healthy Neighborhoods Equity Fund takes money from philanthropists, the investors less concerned with profit, and bundles that with money from the others. If the fund underperforms, philanthropies take the hit first, making the investment less risky.

It’s still a gamble. Flatley said that’s why they pick their locations that on paper have the best chance to succeed.

“Places that you can walk, where you are accessible to transit, where there are places to shop for food,” he said.

Because the fund’s goal is to create stable mixed-income communities, not expensive neighborhoods for tattooed hipsters, HNEF also looks for well-managed affordable housing and buy-in from current residents.

The Box District fits that description.

In 2015, the fund invested in the construction of a new 96-unit apartment building primarily with market-rate units.

“We love it here,” said 26-year-old Flavia Wilson Janzen, a working professional who recently moved with her husband from Minneapolis into a one-bedroom in that building. They enjoy the mixed-income vibe.

“I can walk down the street with my dog and go to the park and there’s kids everywhere. You know, it’s like, it does feel more like a community,” she said.

Another step HNEF has taken to attract private capital to these neighborhoods is by focusing on health.

Not the doctor, health care clinic kind, but a more expansive definition that includes safety and affordable food.

“Those are things that aren’t typically thought of as health, and yet we know they are the keys to being healthy,” said Dr. Megan Sandel, a fund investor from Boston Medical Center.

The fund plans to issue report cards after five and 10 years tracking whether rates of chronic disease and mental health have improved with the investment.

That’s all in the future. Chelsea resident Terri Englen is focused on today.

“As far as the environment right now, it’s not like it used to be,” she said.

One of the most obvious signs of change: The dump is gone. The Englens and other neighbors cleaned it up to “beautify the place” Englen said. In its place they planted sunflowers.

“You would not think driving down the street you would see sunflowers,” she said. “It kind of surprises you when you go around the bend.”