By Sune Engel Rasmussen, November 16, 2017, for The Guardian

With the country’s opium production rising by 87% on last year, a former US base in Helmand is now a drug abuse treatment centre 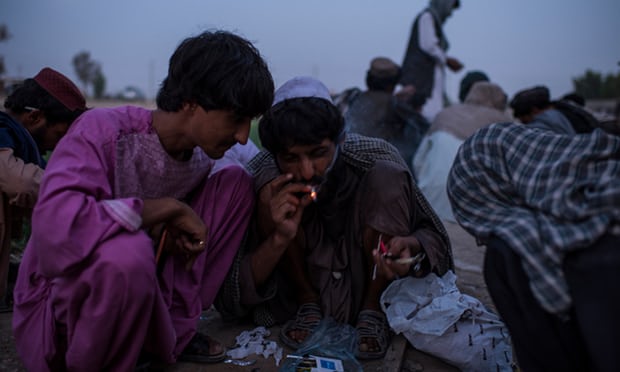 Opium addicts gather to smoke by a wall in a public park in Lashkar Gah, the capital of Helmand province, where half of Afghanistan’s opium is produced. Photograph: Andrew Quilty

For a decade, the office of the British Provincial Reconstruction Team in Helmand was busy dispersing hundreds of millions of aid dollars across the province.

Now, the base is barren; stripped of everything of value. Occasional moans reverberate down the corridors where gaunt-looking men sleep, belly-down, seeking respite from the sun beating through the windows. All of them are recovering drug addicts.

In one room, an elderly man tumbled off his bunk. “Allah, Allah,” Mohammad Rahim mutters, flapping his arms and legs about as if doing snow angels on the dusty concrete floor. He is fighting through second-day heroin withdrawal.

“We all felt like this when we came,” says his roommate, Khairullah. 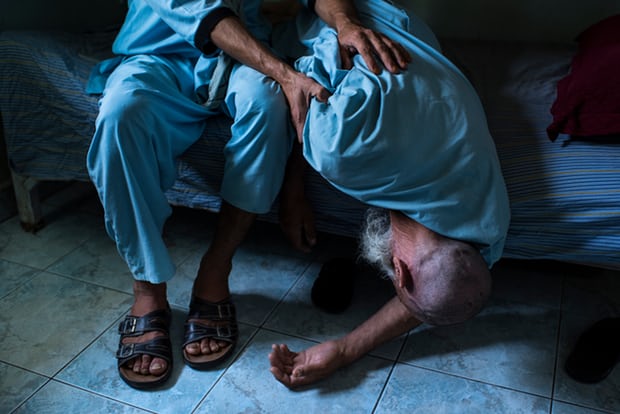 An elderly man falls from his bunk at the drug treatment centre in the provincial capital, Lashkar Gah. Photograph: Andrew Quilty

Afghanistan is the world’s leading producer of opium and heroin. This year, its opium production hit a new record high, rising 87% compared to 2016, according to statistics from the UN. The increase is largely due to a rapid expansion of territory used to cultivate poppy, following advances by the Taliban who both promote and profit from the crop.

Its production leaves behind a trail of addiction. Although most drugs are smuggled abroad, there are between 1.3 million and 1.6 million drug users in Afghanistan, the UN estimates.

Treatment, though, is poor. In Helmand, where half the country’s poppies grow and where unemployment and poverty perpetuate the temptation of readily available drugs, the government offers only 70 spots at two rehabilitation clinics.

“This is a chronic disease, just like cancer,” says Dr Ajmal Fazli, director of a 20-bed clinic.

The treatment on offer is 40 days of cold turkey. Emotional comfort is found in a sort of brotherhood of fellow addicts. The sole entertainment is a small television in front of two plastic chairs.

Patients are men at the fringe of society: scrawny teenage dropouts, rugged old men and, when the Guardian visited, a young man whose family had arranged his marriage, then postponed it for six years so far, until he gets clean.

Some sport crude tattoos – a rarity in conservative Islamic societies – after stints in prison.

“My brother once had me arrested to help me get clean,” says Juma Khan, rolling up his sleeve to unveil an inked snake and a heart. But jail could not break 10 years of addiction.

Helmand has no clinics for addicted women, although their numbers are said to be growing. A small team of female outreach workers comb through Lashkar Gah’s parks, among throngs of male addicts and drug dealers, looking for women.

“We are afraid of going there. We wear doctors’ clothes, and tell them we are there to talk about vaccines for their children. When we sit down with them, we ask about their drug problems,” said Latifa, a social worker. Her team distributes painkillers and supervises addicts at home for 40 days.

But recently, the ministry of public health told her clinic to halve the number of women it targets to 10, supposedly due to limited resources.

Late one afternoon, on the edge of a mosquito-infested swamp about a mile from the Lashkar Gah clinics, two dozen men sit hunched over pipes, heating crumbled pieces of tin foil with heroin worth about 50p each. In the 45-degree heat, the stench of garbage and urine is oppressive. 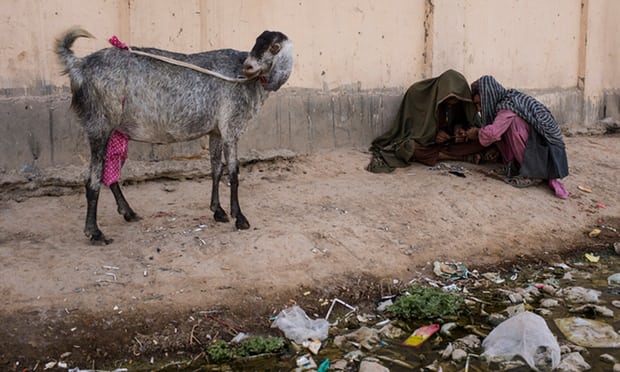 Opium addicts gather to smoke by a wall in a public park in Lashkar Gah. Photograph: Andrew Quilty

One man, Hamid Kabiri, was once a member of the police special forces, but now spends his days in the park smoking. His wife has moved in with his father.

Foreign-funded eradication programs have now been all but disbanded. A $14.6m “food zone” project funded by the US and UK to distribute fertiliser and seeds to farmers ended years ago. Nearly all attempts to introduce alternative crops have failed.

Drug seizures are equally inefficient. In the past decade, authorities confiscated about 450,000kg of opium – less than 10% of the 4.8m kilos of opium produced in 2016 alone, according to the UN. 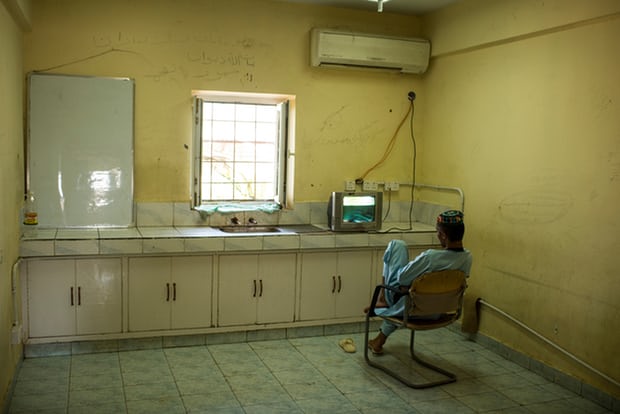 At the Helmand treatment centre in Lashkar Gah, patients who are admitted either voluntarily or by family or tribal elders, undergo a 45 day treatment program. Photograph: Andrew Quilty

In 2001, the last year of its rule, the Taliban outlawed opium cultivation, but they have since reversed course. They now enjoy a growing share of the illicit business, partly due to territorial gains, which allow them to promote and tax poppy.

Farmers were extending poppy growth into the desert, he said, installing wells and discarding other, less lucrative crops.

David Mansfield, a researcher with the London School of Economics and the Afghanistan Research and Evaluation Unit, said satellite imagery showed areas in Helmand close to Lashkar Gah had reverted to growing poppy after years of being off the crop.

“The recent collapse of the government in some of the areas has allowed people to return to poppy,” he said. New technology such as solar panels accelerated cultivation by reducing costs of pumps and generators for irrigation, he added.

“The Taliban’s interest in poppy is often gaining support from the people, and it is a provocative act against the government. It’s a win-win,” said Mansfield.

Use of drugs, however, is not tolerated in Taliban territory and addicts are imprisoned. When Abdul Shakur, 32, was caught by Taliban fighters with drugs in his car in Babaji, they detained him and beat him with sticks for two months before he escaped, he says.

Detention did not cure Shakur. He was able to smuggle opium inside, and once it ran out he escaped. When he returned to his family, he agreed to admit himself in the government clinic. “It has to end,” he says. “I’d like to be a healthy man.”