ON MIGRATION: A New Era in Cuban Migration 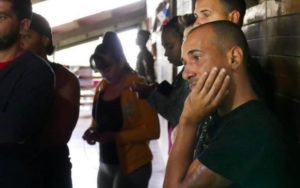 The Obama administration’s decision to end the “wet foot, dry foot” policy has created a migration and humanitarian crisis in Central and South America and a new era in Cuban migration.

The Obama administration’s decision to end the “wet foot, dry foot” policy in January 2017 created a migration and humanitarian crisis in Central and South America. Over 2,000 Cubans found themselves “in-transit” to the United States. They were left in a quagmire. The migrants had no resources to return to Cuba–they sold all of their belonging to set out on their trip to the United States. With the change in U.S. policy, these migrants had no clear way of legally entering the country.

14ymedio, Cuba’s first independent digital news outlet, the Miami Herald/el Nuevo Herald, Miami’s most recognized newspaper, and Radio Ambulante, a Spanish-language podcast that tells stories of Latin America and of Latino communities in the United States and is distributed on NPR, have teamed up to produce a multimedia series to highlight the effect of the new U.S. policy on Cuban migration into the United States.

The team reports on stories directly from Cuba, South and Central America, and the United States. Unlike other stories published about the Cuban migrants in Central America, this series introduces two important differences: first it explains the effect of the new U.S. policy on the lives of the migrants and second it showcases how the change in policy impacts not only the life of the migrants, but also the lives of their families on both side of the Florida Straits.

Read “A new era in Cuban migration: Panama” online at the Miami Herald and at el Nuevo Herald.