NIRVana: Another way to resist hate

For this issue of NIRV Highlights, Community Supported Film is delighted to share the story of one of our donors and volunteers, Christine Arveil, herself an immigrant from France. She has cooked delicious meals for our training sessions, served as training photographer, and provided support for our French-speaking trainee from Haiti. On the day of the protests against hate and white supremacy in Boston on August 19th, she contacted us to see if we could use her help. Below is her own story of that day. 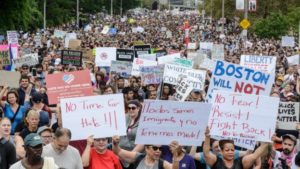 By Christine Arveil, arveil.com Human beings are dangerously obstinate in lashing at history with whips that none of us would like to feel on our skins. On the morning of the 19th of August, I was about to join peaceful marchers gathering in Boston to protest hatred and white supremacy when it came to my mind that I should rather make myself available to those who were at work on developing shared respect and appreciation.

Upon offering my time and energy, I was immediately invited to Community Supported Film (CSFilm) where ten recent immigrants to the United States, tracing roots to Africa, Latin America, and Asia, were completing their fourth week of documentary filmmaking training.

CSFilm provides free professional documentary film training, enabling local immigrants to tell untold stories relevant to their communities. CSFilm helps to express voices that are usually silent, stereotyped in mainstream media, or little noticed in the relentless flood of information on social media. As I arrived at CSFilm, I could not help thinking how one same word can represent opposite perspectives.

The day before, I was with twenty two hundred people enjoying the bliss of a magnificent concert on Tanglewood greens in Lenox, MA. But that Saturday, on Lenox Street in Roxbury, a lonely old man was painfully trying to simply get up from the narrow steps where he had found some rest, so I could climb up to the door of CSFilm. I tiptoed to the back of the room, hoping not to disturb the class in process. Ten young men and women, half the world around the table and probably several religions, were attentively focused on their teacher’s words. Their command of English was impressive, especially for some who had been in America only a few months. Now and then, however, I noticed their cultural differences in little things like the titles they chose to respectfully address their instructor, Michael Sheridan. He was, in turn, “Professor,” “my Colleague,” “Mr.,” or “Mikey.”

I felt comfortable with them, with their positive, somehow elegant, energy. Myself an immigrant to America from Europe, I know how difficult it is to leave everything behind to integrate with a new land. Forever will I remember the worker who unloaded my small trunk with my few possessions and said: “Here’s your stuff, Ma’am. Welcome!” That day, I understood that my true belongings were my energy, my brain and my passion for creating things of beauty and value to society. 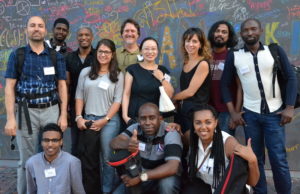 As Sheridan projects films onto a white board covered with diagrams and notes, I recognize both the professor from Mass Art and the Isabella Stewart Gardner Museum documentary filmmaker I have observed before. He creates an atmosphere of comfort, ease, and respect. Everyone calmly engages in turn. He answers each question with precision and deep attention. The room seems to vanish as Sheridan focuses on each individual, his words somehow managing to address the person beyond the student. His hands enact the filming process, with fingers running as he explains how the camera should swiftly move, while his love of his chosen art animates everything. Sheridan becomes something more like a mountain guide: one of the tireless rock climbers who walk ahead of those who will claim new summits; a mountaineer who keeps walking when oxygen rarefies.

Today, the focus is on sound. A music lover, sound is Sheridan’s love as much as the moving images. He introduces the students to the manipulation of the microphone along with filming: “This is when this mighty fine device comes into use” (the boom microphone). He invites them to consider how sounds influence the narrative and affect the capture of images. The story will depend on intricate technicalities that the filmmaker shall master – but only through practice. This Saturday, the afternoon assignment to practice new skills takes us to the SoWa Open Market just up the street. In teams of two, the trainees share a camera and assist each other in recording images and sound. My volunteer role is to document their process in still photographs.

Kiki of Ethiopia and Abdi of Somalia stop at a luxurious rug store, sit for a moment in leather armchairs, and joke that they feel like movie stars. But after a short while, it is “Let’s go back to work!”

The shooting feels professional, especially considering that most haven’t used a video camera or microphone 4 weeks ago. It is fascinating for me to watch the perspective of the vendors and shoppers shift from indifference or slight annoyance toward the film crews to curious engagement when they discover that it is a group of new immigrants learning a new form of communication with infectious purpose, dedication and laughter! Smiles are never long to appear and patience is surprisingly everywhere. As I document their learning, the trainees talk with me about how remarkably different filming a story is from capturing amateur video. They also tell me how heavy the equipment feels by the end of the day, but the quality they get is worth the discomfort, they say.

Late afternoon, after a hard week working in their day jobs and a long day learning to film, everyone relaxes. Laughs, spirited snippets of stories and jokes, feet moving to a dance step, youth, and conviviality combine to vanquish the sordid reality of hate that had clouded the day elsewhere in the city and the country. It feels so natural to be together though we were born in a dozen different countries: why do we allow ourselves to be taught otherwise? Terror has no space where creativity and fresh perspectives bloom and when we listen to those who speak softly.

As we head back from SoWa, I ask around to see what the word “immigrant” means for them. The answers shouldn’t have surprised me: Hope, Peace, and Misunderstandings. (I have hope for the future here. No peace in my homeland. So many misunderstandings about immigrants here.) CSFilm calls the program NIRV for “New Immigrant & Refugee Visions,” but here again, the same term has another meaning for me. My time spent supporting these dedicated and optimistic people was definitely a day of enlightenment – NIRVana! 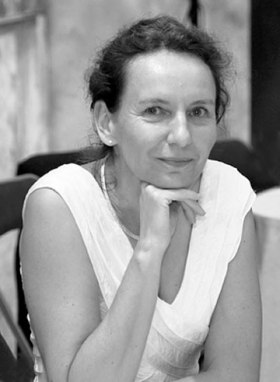 Boston-based artist Christine Arveil has been integrating painting and writing in her creations for 35 years. Born in France in 1958, Christine Arveil became the first of her working-class family to enter university, graduating with a master’s degree in Classics and French literature and later an MBA in Art management. In 1997, Arveil permanently moved to the United States. She integrates her life and artistic experiences into semi-abstract expressionist images for which she devised a unique painting technique and medium based on violin varnish. She is married with master bow maker and MacArthur Fellow Benoît Rolland. She has two children and twin grand daughters. Protest photo by Stephanie Keith/Reuters. All other photos by Christine Arveil. arveil.com
Christine captured “portraits” of our trainees that day. We thought you’d enjoy the results. (click on any image to view all in a slideshow) 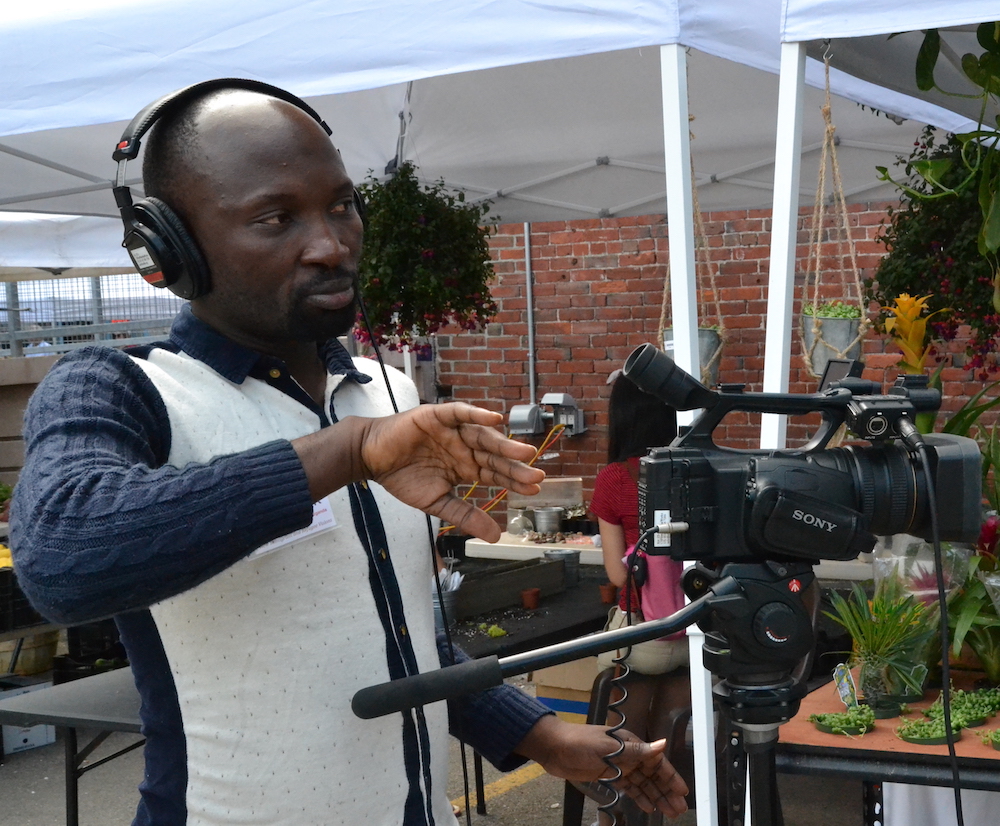 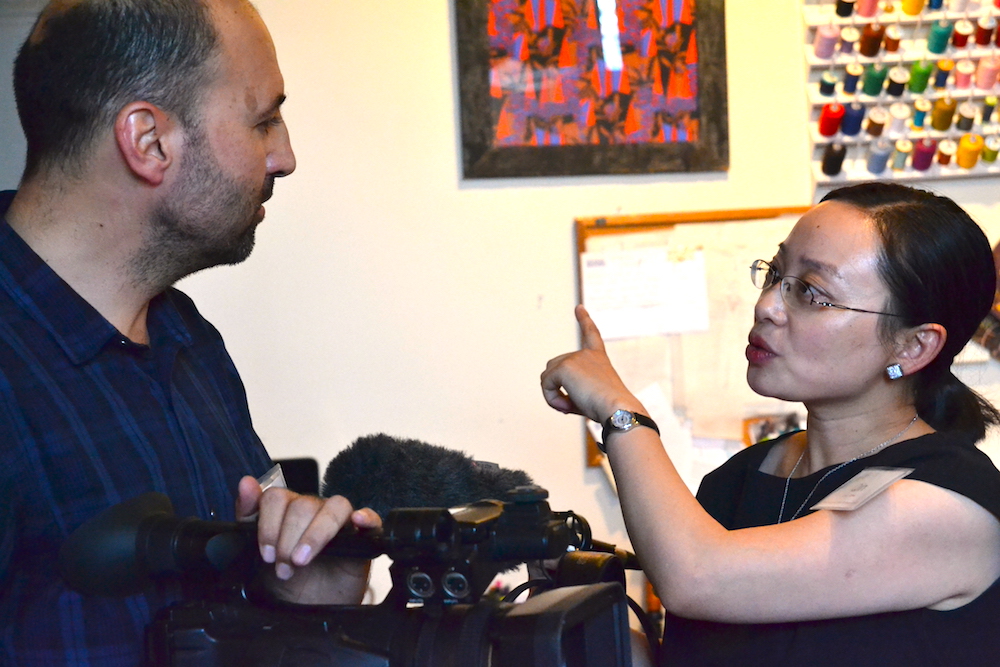 Qin and Sayed discuss the shot 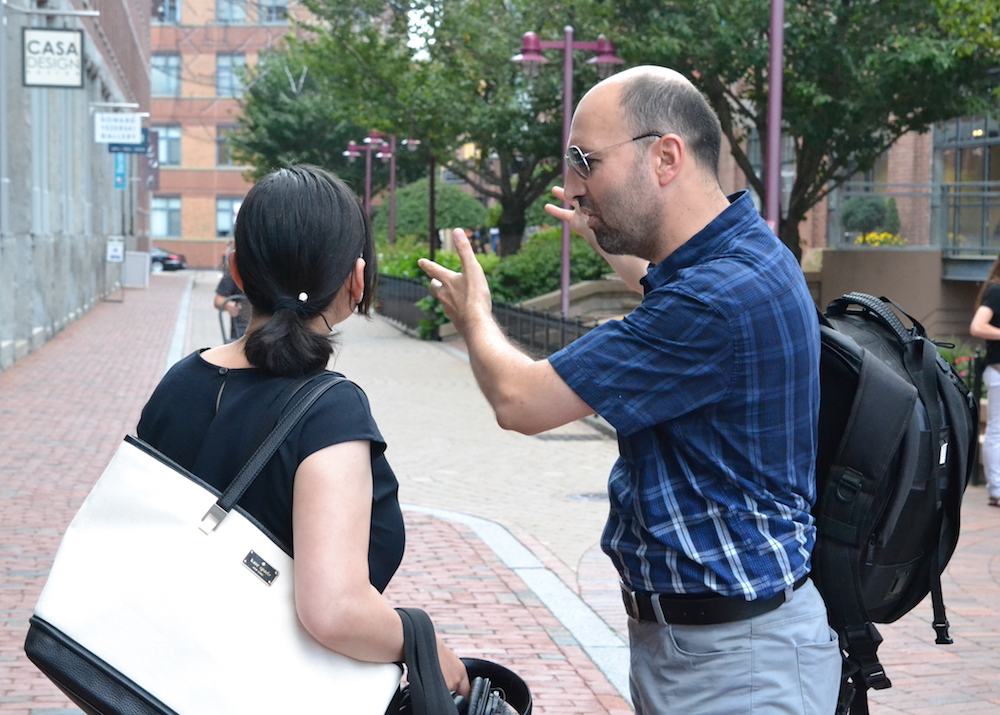 Qin and Sayed look for a quiet place 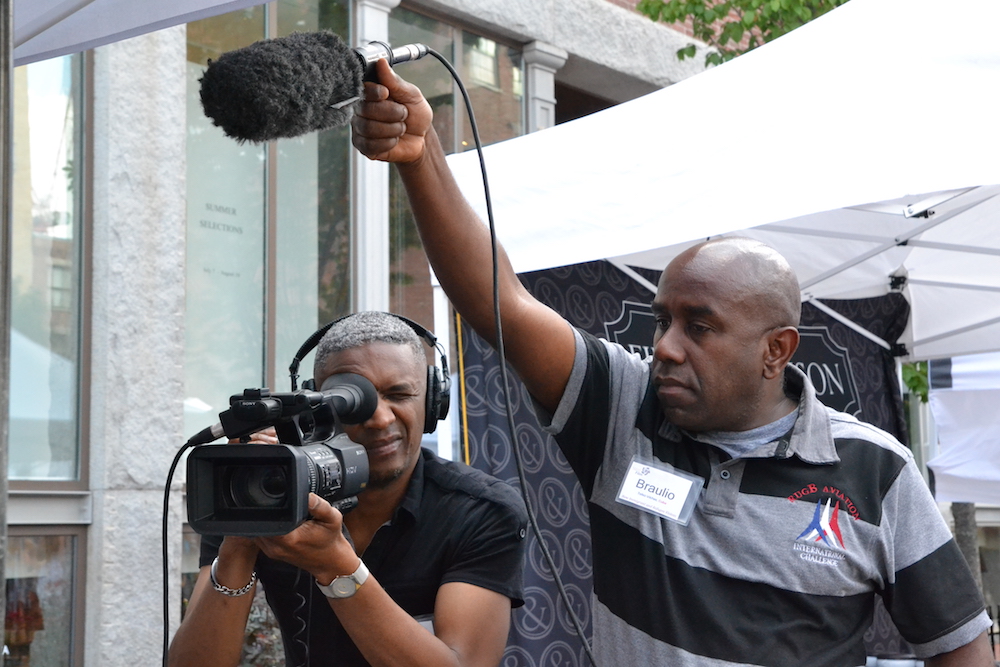 Rafael and Braulio in action 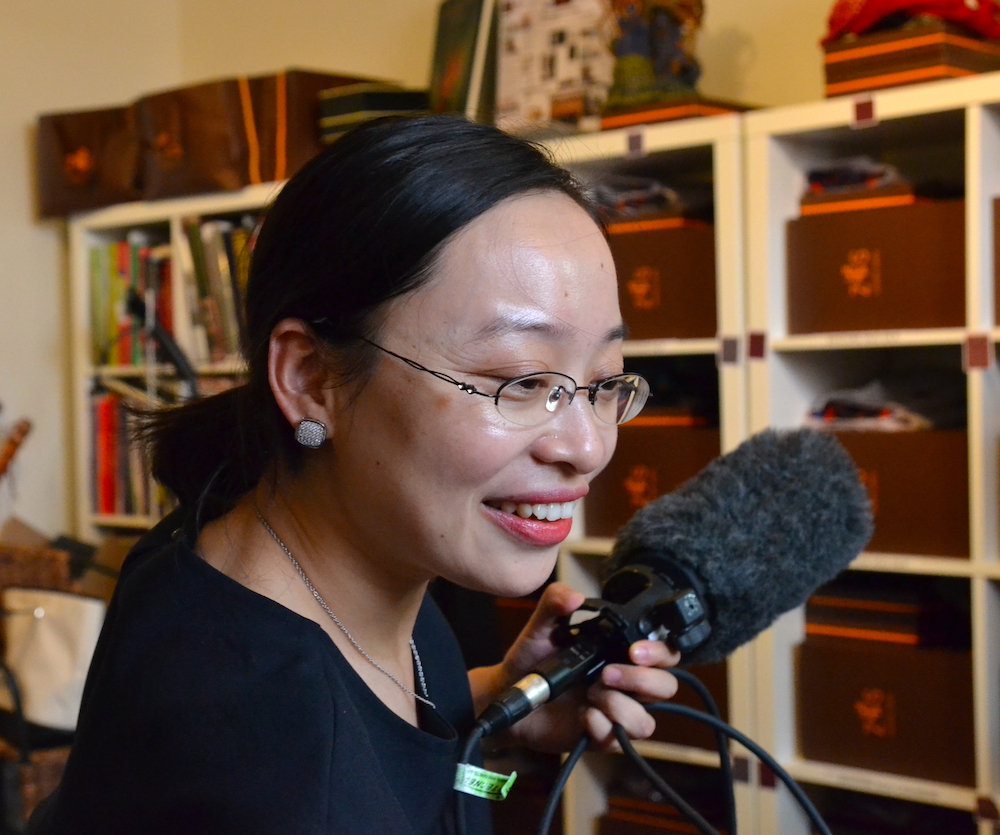 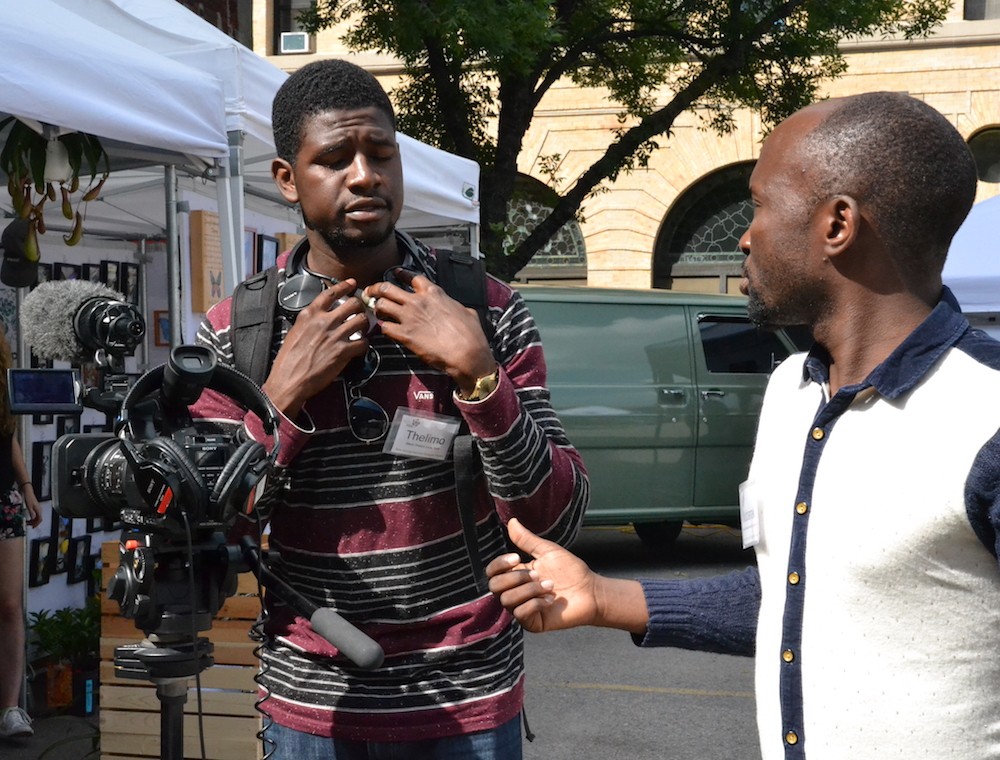 Thelimo and Mubarak discuss the shot 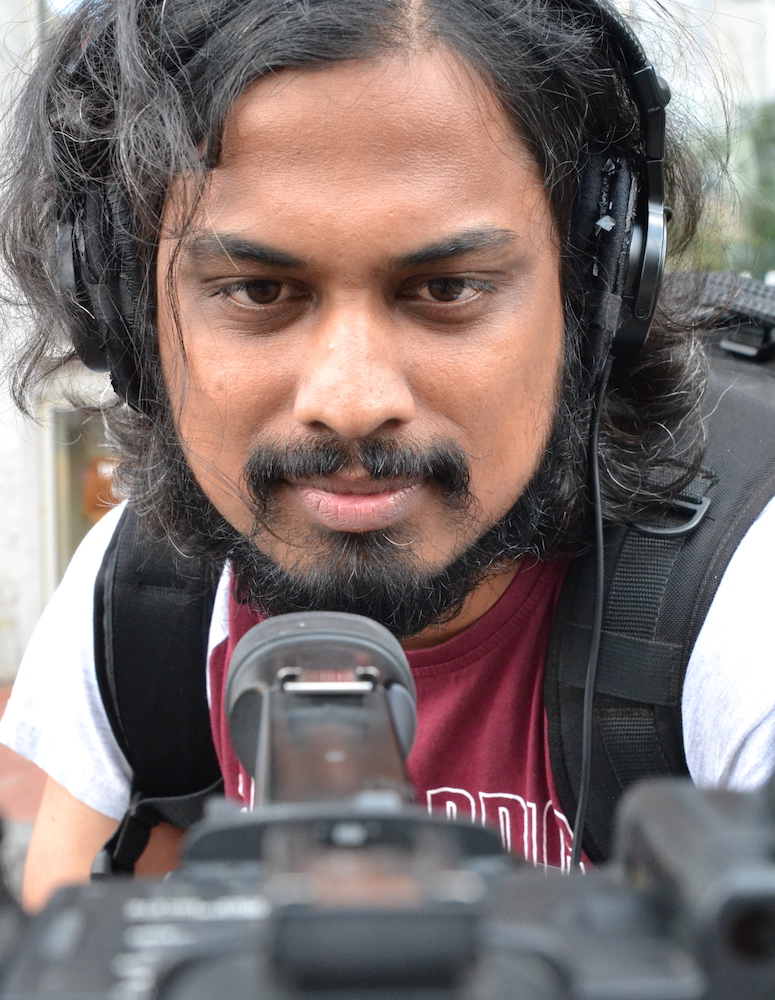 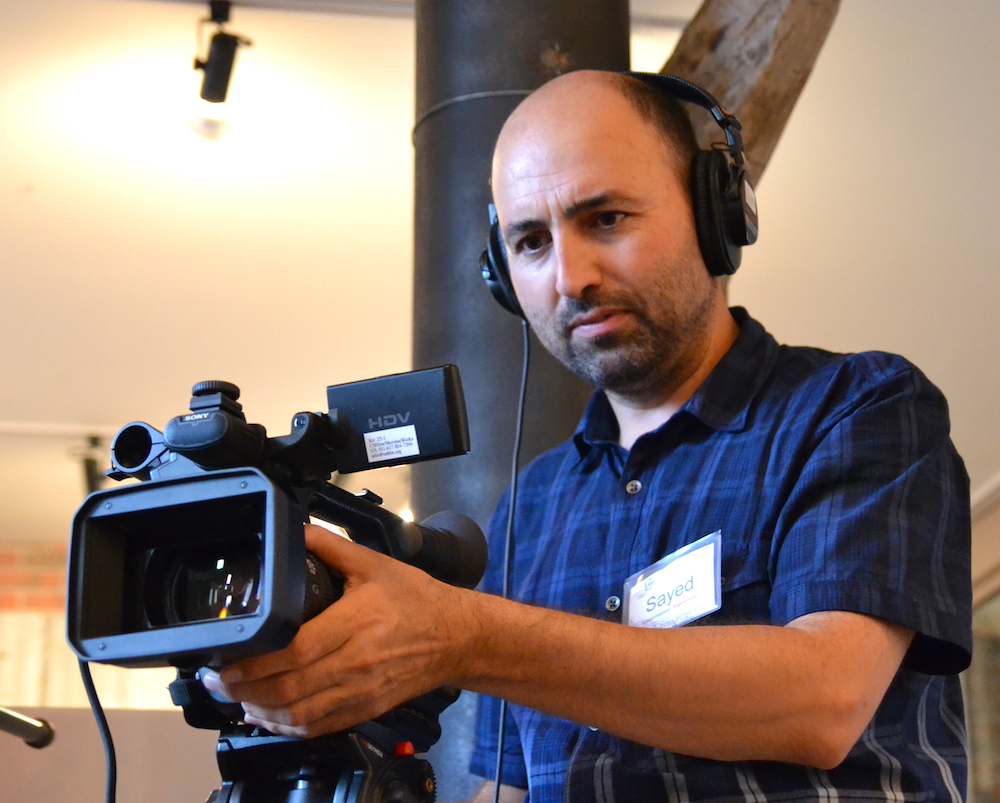 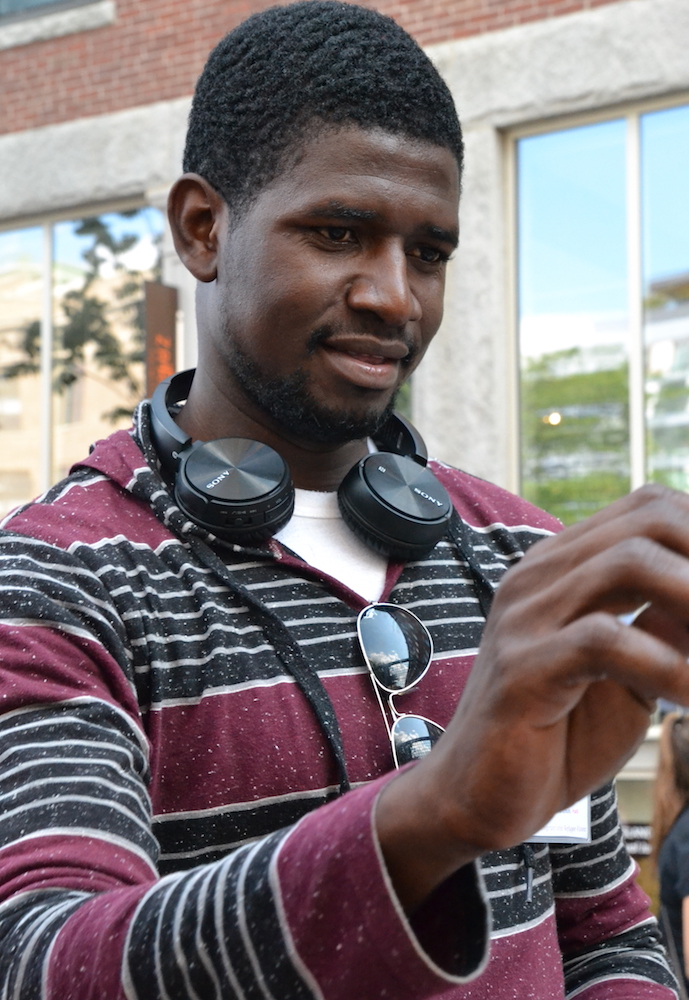 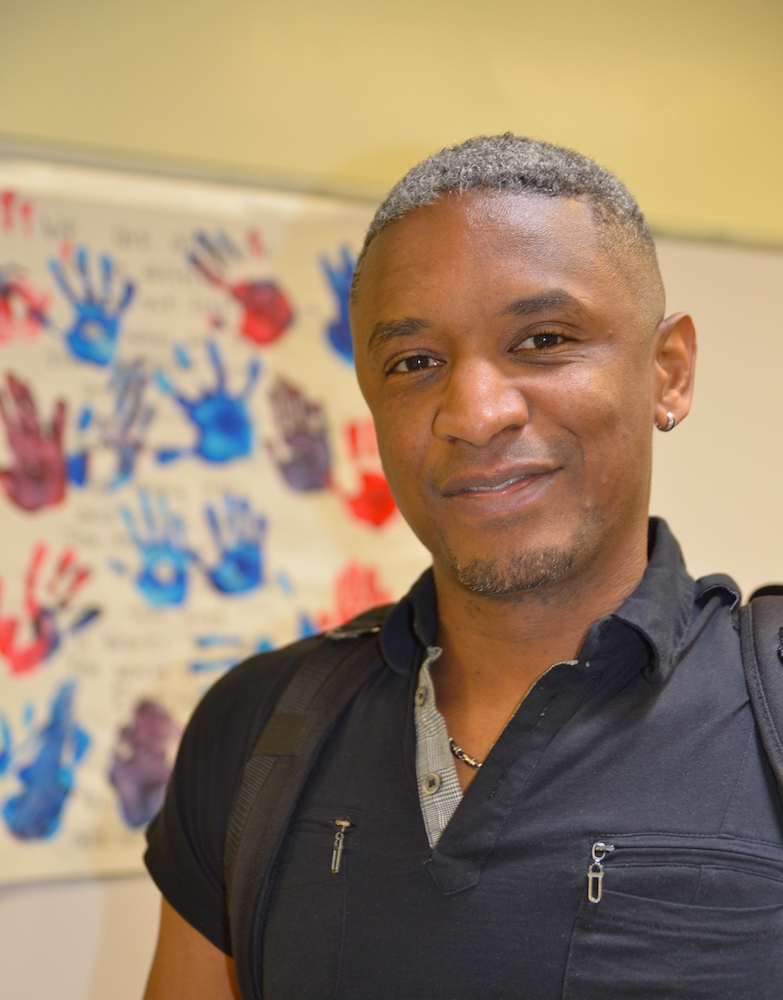 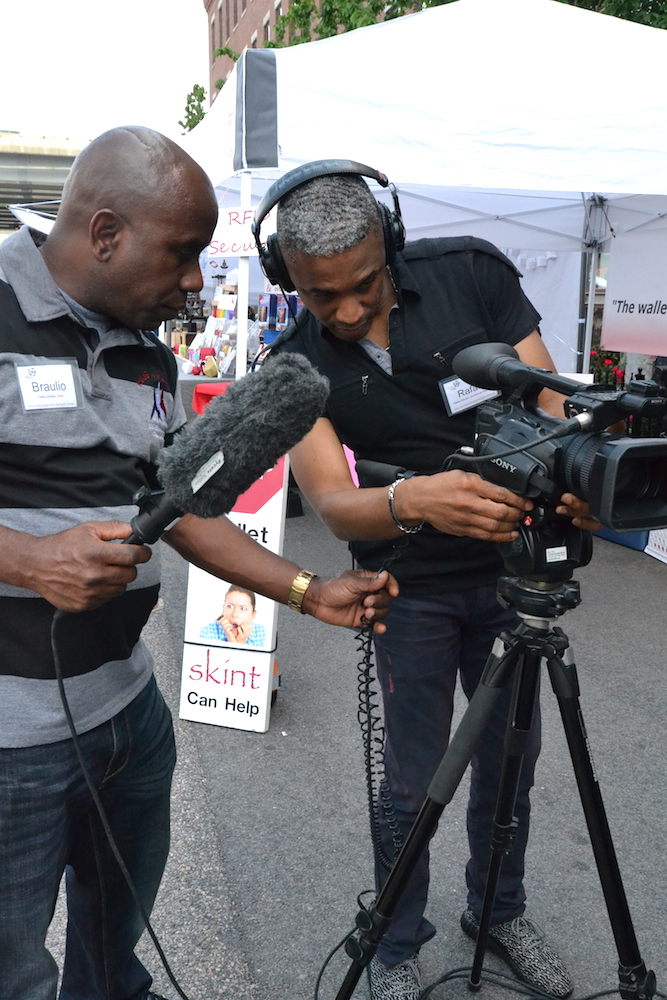 Braulio and Rafael setting up 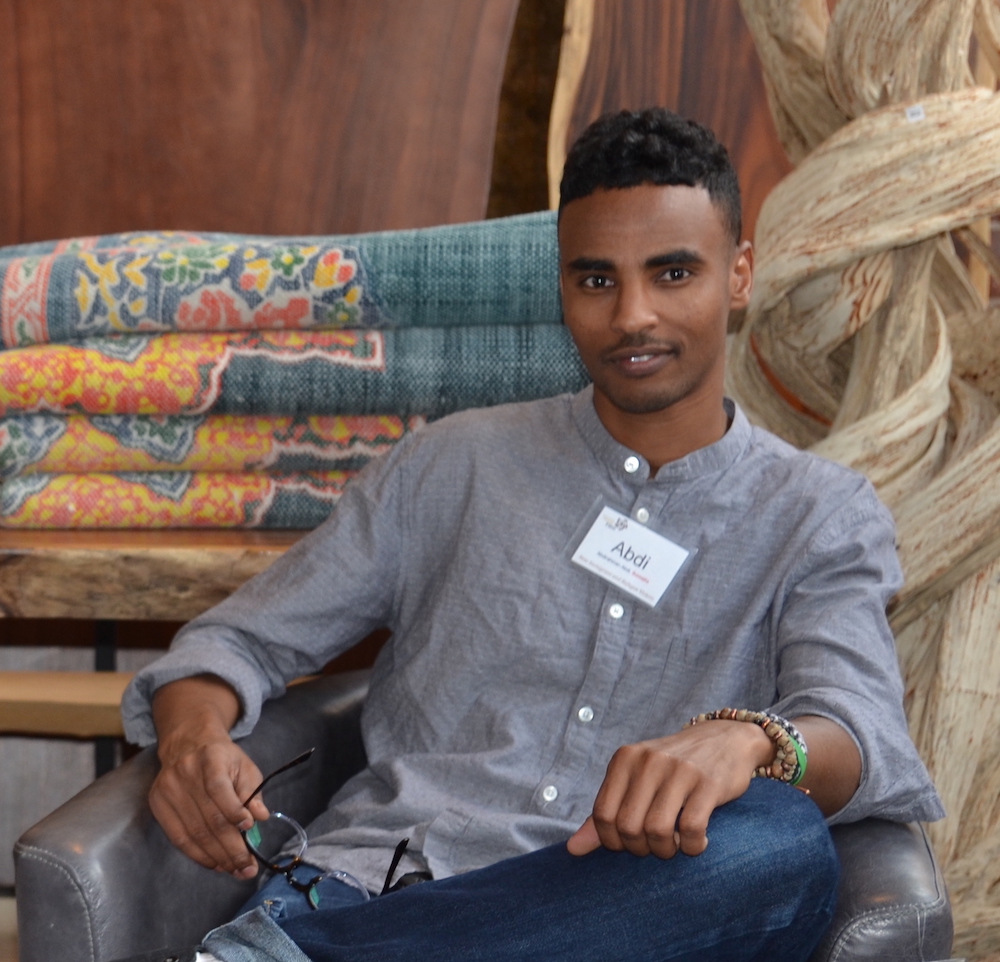 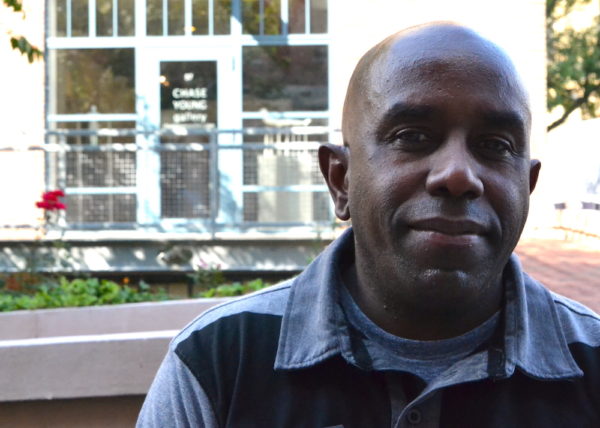 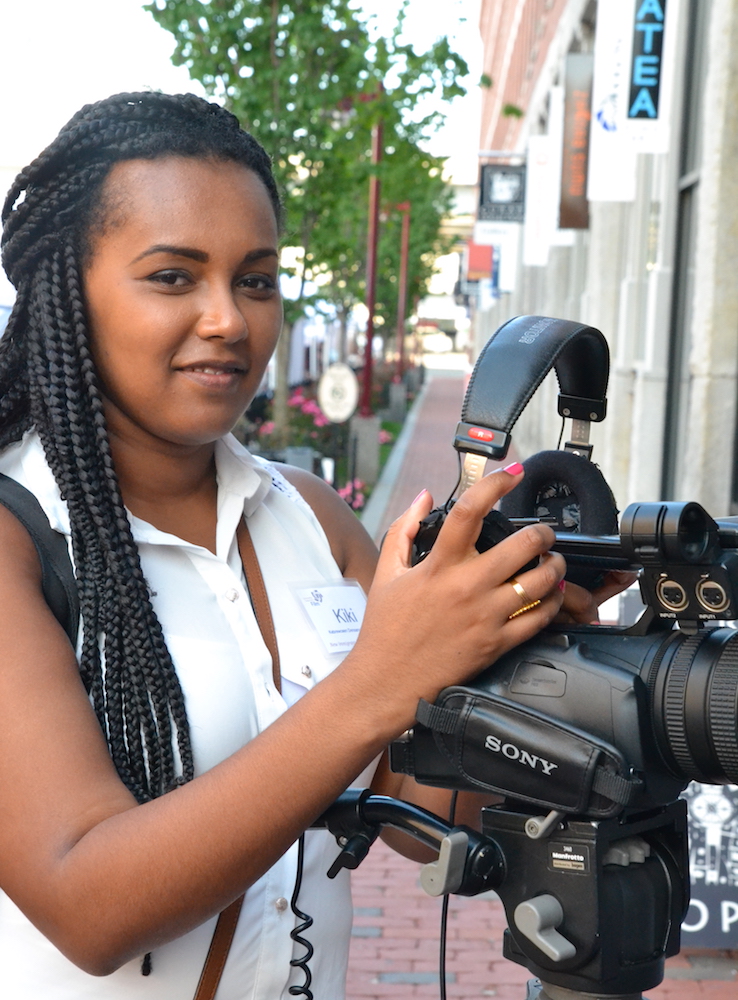 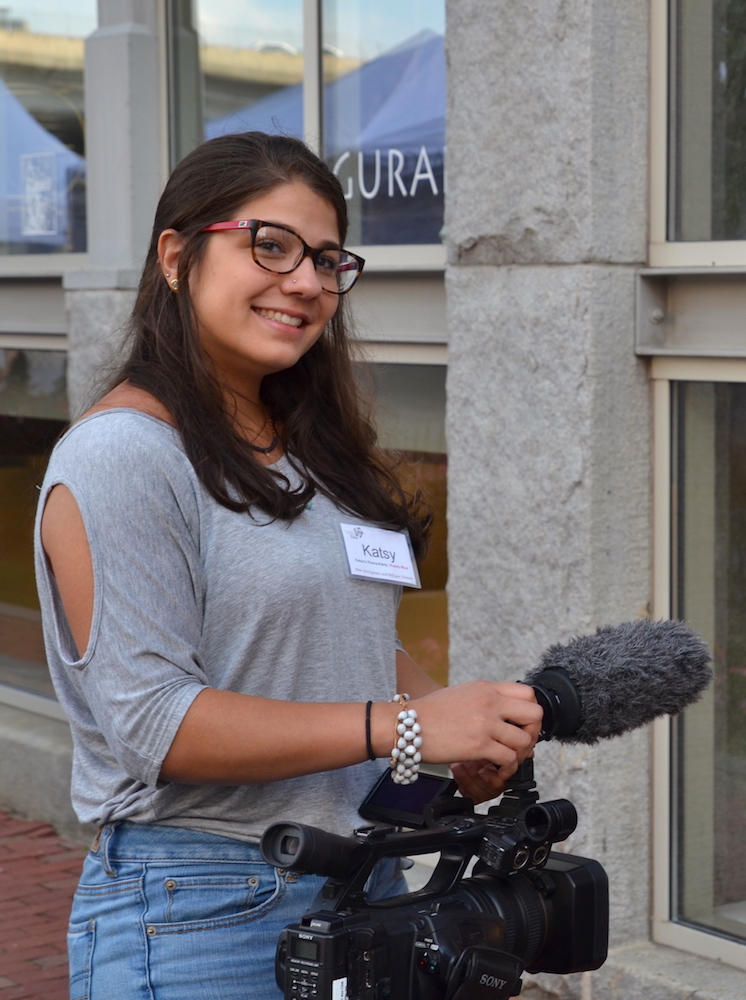 Sayed and Qin in action 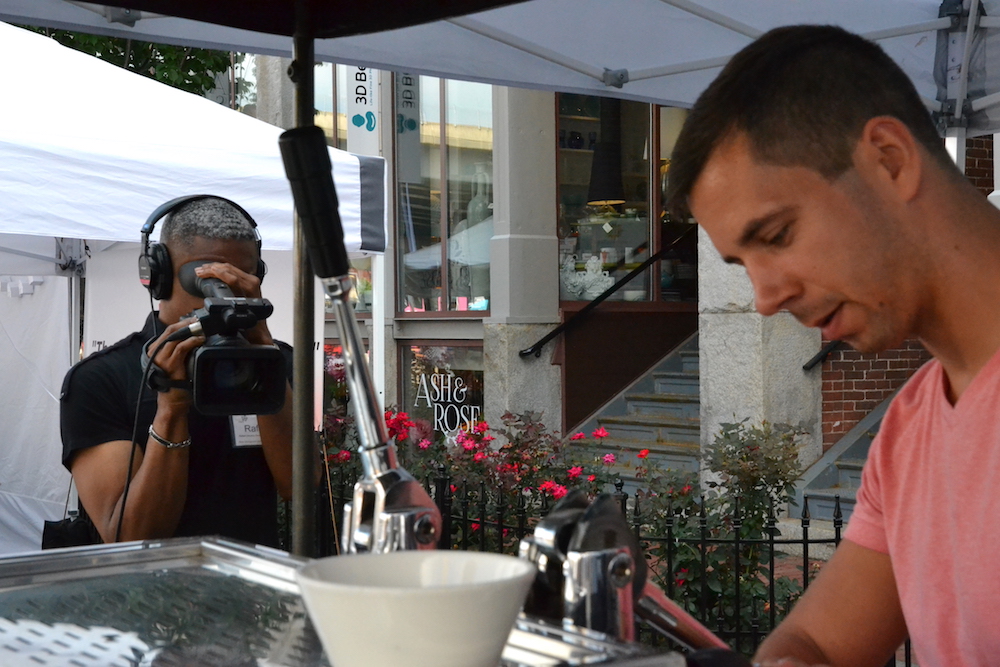 Rafael goes for the close up 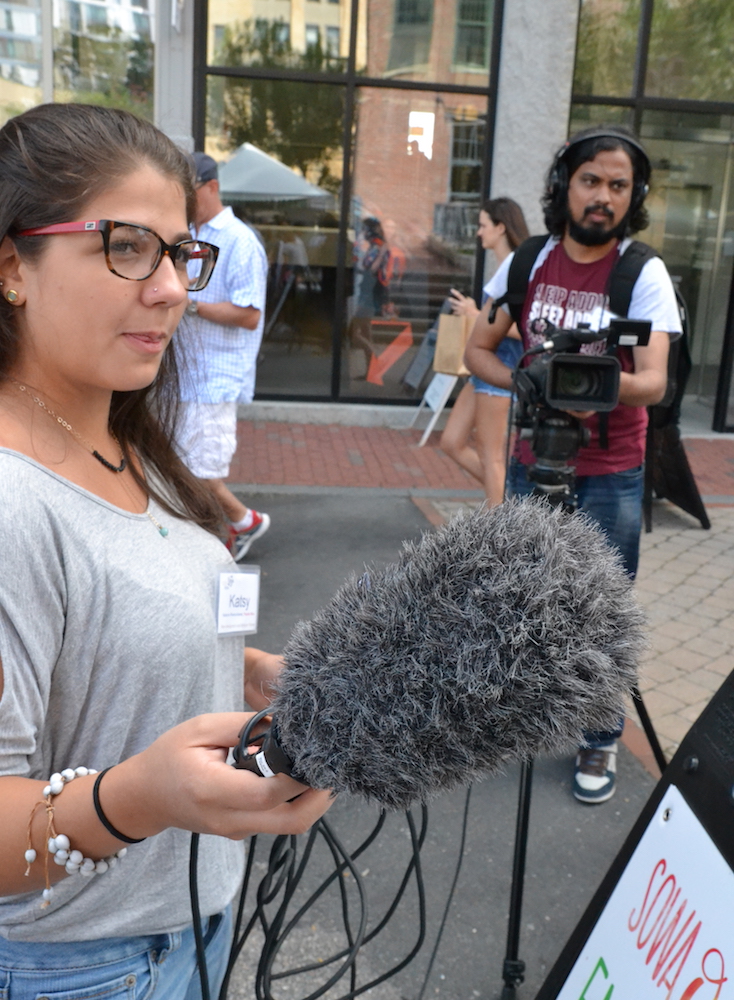 Katsy and Mohammad in action