Meet the Filmmakers, Meet your Neighbors 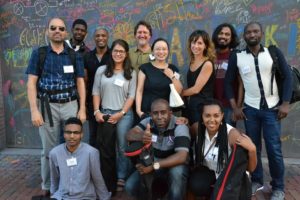 While Denzel Washington films scenes for his latest movie a few blocks away, ten immigrant filmmakers based in the South End/Roxbury are producing ten short documentary films about the immigrant experience in Boston. You may have seen them around the neighborhood, at Ramsey Park or at SoWa Market, working on their filming techniques and interviewing skills as part of the New Immigrant and Refugee Visions project of Community Supported Film, a local nonprofit organization.

On Saturday, October 21st these filmmakers are teaming up with the Roxbury-Dorchester Power in Community coalition of Episcopal churches to host a “Meet the Filmmakers, Meet your Neighbors” reception from 4-6pm at the Church of St. Augustine and St. Martin, 31 Lenox Street (near Ramsey Park and Jim Rice Field, and home to Community Supported Film offices).

Each of the filmmakers will share briefly about their personal stories emigrating from Afghanistan, Bangladesh, China, Cuba, Dominican Republic, Ethiopia, Haiti, Puerto Rico, Somalia, and Uganda. They will also talk about the films they are making, which will show an insider’s perspective on the challenges immigrants face and the contributions they make to our neighborhoods and society.

As many of the filmmakers are new immigrants, they are looking forward to meeting their neighbors. They know they share similar immigrant stories with many families in the neighborhood and are eager to engage in conversation, in a variety of languages, over refreshments from around the world.

They are also looking forward to meeting the neighbors who have an interest in the arts, in filmmaking, and in social justice issues. All the filmmakers have a desire to advance social justice through the multi-media blend of journalism and art that is documentary film. They know that the South End/Roxbury area has a rich heritage of activism and cultural vitality and hope to meet many of those who have made this neighborhood what it is today – to learn first hand about the history and rich social fabric they are becoming a part of. 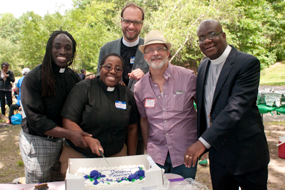 The Church of St. Augustine and St. Martin has sponsored the home office of Community Supported Film for a number of years, alongside the many other community-based organizations and youth programs it supports in conjunction with their partner parishes in Roxbury-Dorchester Power in Community: St. Cyprian’s, St. John St. James, St. Mary’s, and St. Mark’s. Roxbury-Dorchester Power in Community was founded by the Episcopal congregations of Roxbury and Dorchester, in partnership with the Episcopal Diocese of Massachusetts, to celebrate, connect, leverage, and enhance the abundant gifts of their neighborhoods by fostering deep relationships among the diverse populations.

Meet the Filmmakers, Meet your Neighbors

Refreshments from around the world. Multi-cultural music.

All are welcome. RSVP is appreciated to Rev. Dee Littlepage at: rd_pic@icloud.com