HAITI NEWS AND VIEWS: U.S. response in Puerto Rico pales next to actions after Haiti quake 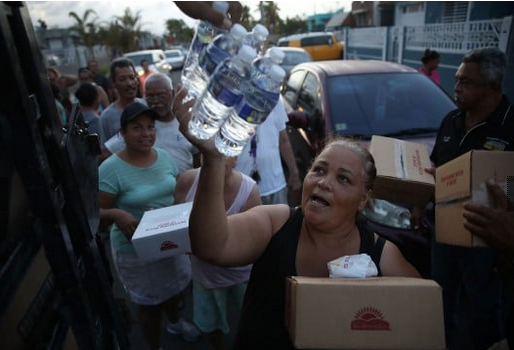 After an earthquake shattered Haiti’s capital on Jan. 12, 2010, the U.S. military mobilized as if it were going to war.

Before dawn the next morning, an Army unit was airborne, on its way to seize control of the main airport in Port-au-Prince. Within two days, the Pentagon had 8,000 American troops en route. Within two weeks, 33 U.S. military ships and 22,000 troops had arrived. More than 300 military helicopters buzzed overhead, delivering millions of pounds of food and water.

No two disasters are alike. Each delivers customized violence that cannot be fully anticipated. But as criticism of the federal government’s initial response to the crisis in Puerto Rico continued to mount Thursday, the mission to Haiti — an island nation several hundred miles from the U.S. mainland — stands as an example of how quickly relief efforts can be mobilized. 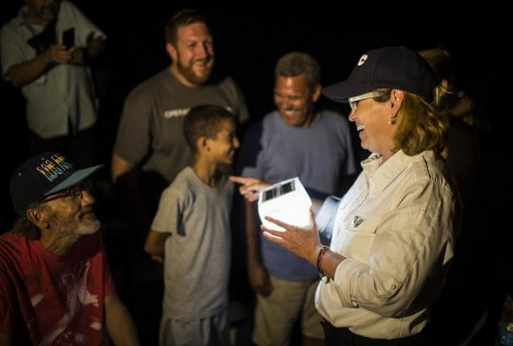 By contrast, eight days after Hurricane Maria ripped across neighboring Puerto Rico, just 4,400 service members were participating in federal operations to assist the devastated island, an Army general told reporters Thursday. In addition, about 1,000 Coast Guard members were aiding the efforts. About 40 U.S. military helicopters were helping to deliver food and water to the 3.4 million residents of the U.S. territory, along with 10 Coast Guard helicopters.

Leaders of the humanitarian mission in Haiti said in interviews that they were dismayed by the relative lack of urgency and military muscle in the initial federal response to Puerto Rico’s catastrophe.

“I think it’s a fair ask why we’re not seeing a similar command and response,” said retired Lt. Gen. P.K. “Ken” Keen, the three-star general who commanded the U.S. military effort in Haiti, where 200,000 people died by some estimates. “The morning after, the president said we were going to respond in Port-au-Prince . . . robustly and immediately, and that gave the whole government clarity of purpose.”

Rajiv J. Shah, who led the U.S. Agency for International Development during the Haiti response, said he, too, was struggling to “understand the delays.”

“We were able to move more quickly in a foreign country, and with no warning because it was an earthquake, than a better-equipped agency was able to do in a domestic territory,” he said. 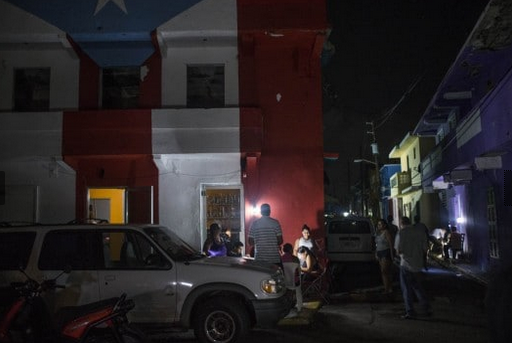 The Federal Emergency Management Agency has defended its efforts in Puerto Rico, saying it is coordinating a wide-ranging campaign to simultaneously deliver food, water and medicine and to restore power, clear pathways to hospitals and reopen mangled ports and airports.

It’s a monumental task, one that FEMA says has been complicated immensely by a near-complete collapse of cellphone service on the island, as well as years of neglect to power lines and other utility systems.

FEMA and Defense Department officials have taken steps to beef up the response, announcing Thursday that they would elevate the military command structure on the ground in Puerto Rico, sending in a three-star Army general, Lt. Gen. Jeffrey S. Buchanan.

Keen, who was named to lead the efforts in Haiti three days after the quake, pointed to a complicating factor: Puerto Rico is a U.S. territory, not a foreign nation, and that makes a huge difference in the rules of engagement when disaster strikes.

In Haiti, the United States was able to deploy active military combat brigades, quickly install a military commander and militarize the airspace at the invitation of Haitian officials.

In Puerto Rico and other U.S. territories, the nearly 140-year-old Posse Comitatus Act limits the role that active military personnel can play.

Also, Puerto Rico’s aid requests, made under a mutual-assistance compact among the states and U.S. territories, helped shape the response. In recent days, as criticism of the effort has grown, administration officials have repeatedly said they are delivering what Puerto Rico has asked for.

Maj. Gen. James C. Witham, director of domestic operations for the National Guard Bureau, said that immediately after Maria’s landfall, Puerto Rico requested only communications equipment and fewer than 200 military police officers. By comparison, 17,567 guardsmen from 24 states were on duty in Florida a day after Hurricane Irma made landfall. 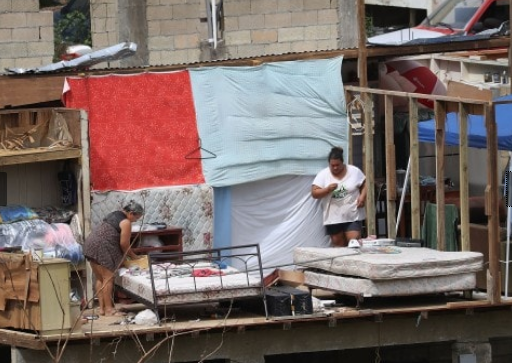 More than 400 guardsmen from other states had been in Puerto Rico, assigned to help with cleanup from Irma, before Maria. Most evacuated in advance of Maria, and Puerto Rico has made no request for them to return, officials said.

All but about a few hundred of the 2,000 guardsmen now in Puerto Rico are members of the territory’s own Guard unit. The National Guard Bureau has drafted plans to send as many as 6,000 soldiers, but Puerto Rico has yet to request them, Witham said.

“Essentially, everything Puerto Rico has asked for up to and including today we’ve tried to align with and lean as far forward as we can,” Witham said.

What is clear is that, since Maria ravaged the island, there has been a disconnect between the level of aid requested or delivered and the needs of residents who are desperate for water, food and basic necessities of life.

At a hearing Wednesday, Sen. Margaret Wood Hassan (D-N.H.) read from an email in which a former Puerto Rico governor, Alejandro García Padilla, warned that “unless we see a dramatic increase in assistance and personnel reaching the island soon, many thousands could die.”

“We need the Army and the National Guard deployed throughout the island, now, today,” Hassan said, reading from the letter. “This cannot wait another day. Despite federal agencies coordinating in San Juan, there is very limited presence of military personnel assisting people in the streets and throughout our communities.”

Elaine Duke, the acting head of the Department of Homeland Security, responded: “The president, vice president and I talked with the governor yesterday. And that was about 1 o’clock. And we — he had no unmet needs at that point.”

John Rabin, a senior FEMA official in Puerto Rico, denied during a media teleconference Thursday that the federal government is waiting for requests from officials on the island.

“We are in lockstep with those guys, but we also recognize that this is a disaster and we have our priorities,” Rabin said. “We are not in a waiting mode for anything.”

Also Thursday, Puerto Rico Gov. Ricardo Rosselló defended his government’s response to the humanitarian crisis. He said the unprecedented destruction of the storm and logistical limitations have impeded the flow of resources to some of the island’s communities.

Rosselló walked into a daily briefing at the Puerto Rico convention center accompanied by a general or an admiral representing each branch of the U.S. military, displaying a united front a week after the hurricane walloped the island.

The governor emphasized that federal agencies are taking their direction from the territorial government.

“Let’s make this clear — this is an operation of the government of Puerto Rico,” Rosselló said. “We set the priorities. . . . We are taking action, and there are results.”

Rosselló said the island’s geographical challenges — everything must be brought in by boat or air — and the widespread communication failures have complicated relief efforts.

W. Craig Fugate, who was President Barack Obama’s FEMA director for all eight years of his presidency, said that in a worst-case scenario, such as a tsunami, the federal government had long contemplated that Puerto Rico could be completely isolated, with its ports destroyed and all food and water needing to be airlifted onto the island or shuttled by Marine units that could land on beaches.

Fugate said FEMA did not have to wait for a signal from Puerto Rican authorities before activating more military assets. 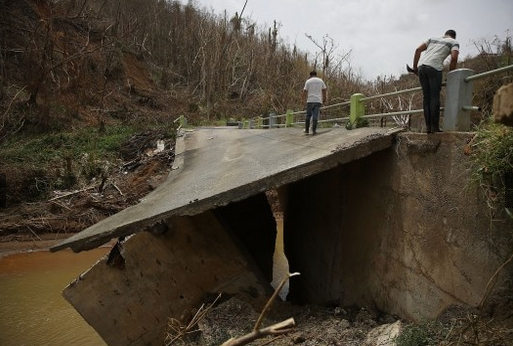 Two U.S. defense officials, speaking on the condition of anonymity to discuss the sensitive operation, said the inability to communicate readily with Puerto Rican officials immediately after the storm delayed the response. Another limiting factor, they said, was that FEMA officials did not have a full understanding of the devastation and the challenges until Director William “Brock” Long visited the island Monday. The next day, Long announced outside the White House that the military would deploy to Puerto Rico the 1,000-bed hospital ship USNS Comfort.

At least two other Navy ships, the USS Iwo Jima and the USS New York, responded to Hurricane Irma earlier in the month off the Florida Keys and could have been used to respond to Maria. Defense officials said they were instead sent back to Mayport, Fla., and remain in port there on ­prepare-to-deploy orders. They may yet be called upon to join the response.

On the day the quake rocked Haiti, one bit of happenstance may have sped the U.S. response. Keen happened to be on the island, at the residence of the U.S. ambassador. Keen watched dust rise across the countryside as buildings collapsed. A member of his staff was killed when the hotel where they were staying crumbled.

Keen relayed his firsthand account back to the head of the U.S. Southern Command, who was traveling in Washington. That night, Obama called USAID’s Shah and told him to spare no expense in responding. “He said it was a chance for America to demonstrate our moral character,” Shah recalled.

Air Force combat control teams were in the air the next morning. The airport, which became “the island’s lifeline,” Keen said, was secure and operational by nightfall. Troops began arriving every couple of hours.

“The real test of leadership,” he said, “is now what do we do about it now that it’s clear that Puerto Rico is going to need help for a long time.”