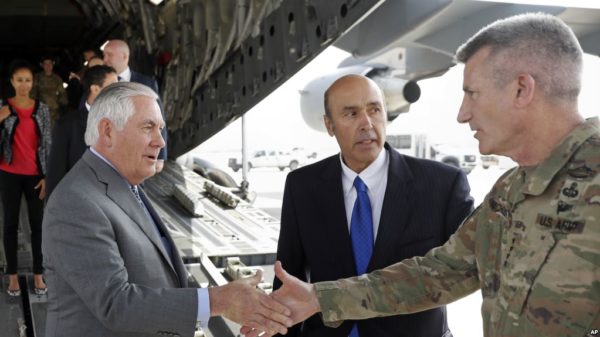 ISLAMABAD — America’s security “failures” in Afghanistan are evident from events of the week when visiting Secretary of State Rex Tillerson could not move out of a U.S. military base and invited Afghan leaders to his “bunker” for talks, neighboring Pakistan said Thursday.

“This situation tells the whole story of U.S. failures, despite fighting in the country for 16 years,” Foreign Minister Khawaja Asif said. He was briefing a parliamentary committee on foreign affairs in Islamabad.

Pakistan is seeking “transparent” relations on “equal terms” with the United States and is ready to offer its “full cooperation” in fighting terrorism, but “without compromising its sovereignty” and scapegoating Islamabad would not be acceptable, the minister said.

Tillerson visited Afghanistan on Monday for two hours. He held talks with Afghan President Ashraf Ghani and top leaders of his unity government at the U.S.-run Bagram military base, about 60 kilometers north of the capital, Kabul. Officials cited security concerns for arranging the meeting at the base. 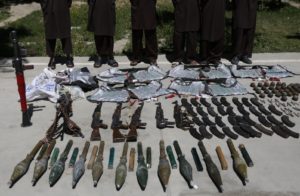 FILE – Weapons and ammunition seized are presented to the media along with insurgents suspected of being from the Haqqani network at the National Directorate of Security (NDS) headquarters in Kabul, May 30, 2013.

Pakistan is accused of sheltering and maintaining secret ties to the Taliban and the Haqqani network. Both militant groups are waging a deadly insurgency in Afghanistan. Asif said Pakistan’s influence on the Afghan Taliban has lately diminished because it has moved its bases to the Afghan side of the border

​On Wednesday, Asif briefed the lower house parliament on talks with the U.S. delegation, describing them as “frank” and held in a “cordial” atmosphere without an exchange of allegations.

He said Pakistan told the U.S. delegation if Washington provides actionable intelligence, Islamabad will take action against any militant group on its soil, and again denied his country is harboring safe havens.

“However, if they want that we act as their proxies to fight their war … this is unacceptable,” said Asif. He added that Pakistan’s counterterrorism efforts have produced results and led to improved security around the country.

“We told them [the U.S. delegation] there are influential players in the region, which might not have good relations with America but have a stake in the Afghan dispute,” Asif said.

He was apparently referring to Russia and Iran. Both have acknowledged publicly they maintain ties with the Taliban.

The role of those countries has become indispensable as far as solving the Afghan conflict, he added.