AFGHANISTAN NEWS AND VIEWS: How Taliban are evolving to compete in Afghanistan

A SHIFT IN THOUGHT  – The once mostly Pashtun insurgency is broadening its ranks, amending its tactics, and seeking political relevance, even as it advances its campaign of violence and intimidation against Afghanistan. 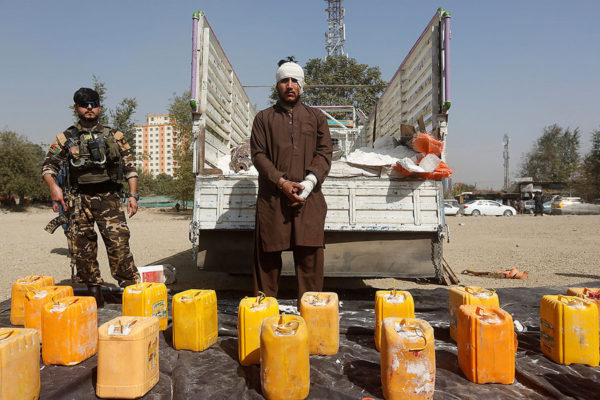 A Taliban insurgent is presented to the media after he was arrested with car explosive devices in Kabul, Afghanistan, October 15, 2017. (Omar Sobhani, Reuters)

The final Taliban threat was the most chilling, the culmination of months of pressure built against a single Afghan policeman – and it worked.

Introducing himself as “the scholar,” the Taliban operative warned that it would be the last phone call, the last threat to convince Ahmad, a veteran of frequent battles with the Taliban with calluses on his shooting hand, to leave the police force.

“He was younger, absolutely illiterate,” Ahmad says of the man who called him a few weeks ago. “He said: ‘If you don’t leave your job in the next two or three days, we will find you and behead you.’ ”

Within hours, the five-year veteran of the Afghan National Police – who asked that his real name not be used, for his own security – told his commander he was going on holiday, and left his base in Logar Province south of Kabul to find a new job in the Afghan capital.

Though the Taliban intimidation campaign was intense, in a region where Ahmad says insurgents are “becoming stronger day by day,” the fact that this Afghan policeman was not killed outright is but one illustration of how analysts say the Taliban have evolved in recent years from the uncompromising hard-liners who in the late 1990s ruled their self-declared “Islamic Emirate.”

Sixteen years after being toppled from power by US-led military forces – and that many years of insurgency later – the Taliban have been attempting to re-forge themselves into a more ethnically diverse and politically relevant national Islamist movement. 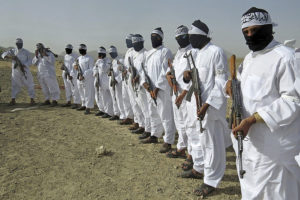 Taliban suicide bombers stand guard during a gathering of a breakaway Taliban faction, in the border area of Zabul Province, Afghanistan, in August 2016 (Mirwais Khan/AP)

Once a rural movement almost exclusively rooted among ethnic Pashtuns from the south, the Taliban today are religiously trained fighters, native to an area, who can understand and accommodate local politics and needs.

“This new generation is of course different from the Taliban of the 1990s,” says Obaid Ali, an insurgency expert with the Afghanistan Analysts Network (AAN) in Kabul.

“They are locals, they are more radical, they are more religious-educated young people,” says Mr. Ali. “These people, while they study in religious schools, at the same time receive military training in Pakistan, and from there return to their home town, not only as a mullah, but also as a military commander.”

While the evolution has presented challenges as well as opportunities, it has coincided with significant battlefield gains for the Taliban, especially in 2015 and 2016. Today they control as much territory as they have since 2001 and control or contest at least one-third of the country, some estimate far more – including Ahmad’s district in Logar, where he says even his neighbors served as spies, alerting the Taliban when he returned home after work.

Ahmad’s story is far from unique. The Afghan army and police are suffering “disastrously high attrition” rates and shrinking recruitment as a result of Taliban intimidation, infiltration, and attacks, notes one Western official in Kabul.

And even if one facet of the Taliban’s evolution is to spare the lives of captured soldiers and police, the usual Taliban methods of targeting security and government facilities have inflicted record casualties in 2017.

According to numbers tabulated by The New York Times in August, 31 Afghan soldiers and police officers have been killed each day this year on average.

A wave of suicide attacks claimed by the Taliban, carried out on two days last week in every corner of the country, left more than 120 Afghan soldiers and police dead.

“There are two types of people in Afghanistan now, those who will take those risks of joining the security forces, and those who won’t,” says Masood Karokhail, head of The Liaison Office (TLO), a Kabul-based group that facilitates peace and rebuilding efforts. “One reason urban centers are becoming congested is because having a government job and returning to your village is not that easy.”

The Taliban have nevertheless tried to strike a balance between attacking the government for ideological reasons while demonstrating they do not just destroy everything that comes their way, says Mr. Karokhail.

“When the Taliban don’t claim responsibility for mass casualty attacks, like the Islamic State does … they are trying to posture themselves for a political deal at the same time,” he says. “They want to be a relevant political force in this country, so their propaganda mechanism … even announces it will not attack development programs, and large-scale infrastructure like schools and roads.”

When the Taliban were in power two decades ago, they banned education for girls and even photographs of people. Taliban checkpoints were festooned with billowing clouds of unspooled video and cassette tapes confiscated from drivers. Mosque prayers were compulsory, with beatings as punishment.

Since 2008 the Taliban also began to portray themselves as multiethnic, and since 2014 began recruiting ethnic Tajiks, Uzbeks, Turkmen, and even Shiite Muslim Hazaras, says Ali from AAN. Large offensives were launched, even as US and NATO troops withdrew. And with opium smuggling and local taxation already locked down, attempts were made to control mineral and other self-sustaining resources.

Crucially, the Taliban also began “to be more flexible with locals, with local concerns,” notes Ali. That included mediation with elders that resulted in the safe release of captured policemen and soldiers, instead of “killing them straightaway, without mercy,” as had been policy until 2014, he says.

Yet undermining the government has also meant continuing well-honed tactics to intimidate and strong-arm police and army recruits, regardless of any newfound flexibility.

One method especially potent among Pashtuns is to make their target – and the target’s family – feel impure about working for the government or taking any security job, says Rahmatullah Amiri, a TLO researcher focusing on the Taliban and other Afghan militants.

While such mechanisms work among Pashtuns and others as a local tactic, strategically the Taliban’s increasing ethnic diversity has been a double-edged sword.

“They are not as united as they were before, and the more they grow the more they face internal problems,” says Mr. Amiri. “The more they capture areas, the more difficult it is for them to control.… They need more support; there are new people with new ideas.”

Challenges include the growth of the local branch of the so-called Islamic State in Afghanistan, and internal Taliban divisions have been more pronounced since their former leader, Mullah Akhtar Mohammed Mansour, was killed in Pakistan by an American drone strike in May 2016.

Lack of a regional coordinating body and increased reliance on local funding sources – as past channels of cash from Pakistan and Persian Gulf countries dry up, or become more diffuse – have added to Taliban command and control problems.

“The fact that the Taliban continue to take territory out in the districts means that individual Taliban commanders and the Taliban as a whole are richer, because they have more smuggling rings,” says the Western official in Kabul, who asked not to be identified further.

Opium, hashish, white marble, timber, and lapis lazuli can be smuggled out more easily, he says, just as weapons and material can also be brought in more easily.

“That makes it hard to get peace negotiations started, because as much as diplomats and military officials keep insisting that we are in a stalemate, if ordinary Taliban commanders see that last week they had [control of] two villages, and this week they have three, they don’t consider that to be a stalemate – so they don’t have a huge incentive to negotiate,” says the official.

Another challenge to the Taliban, however, is the more aggressive US policy announced by President Trump in August, including the deployment of extra US troops and his declaration that he would not set a deadline for withdrawal before “victory” is attained.

The new US strategy “absolutely gives a window of opportunity to the government. But the government should do its homework, it should win locals’ trust [and] work better for the people,” says Ali, the AAN expert.

That homework is what is lacking in Logar, where ex-policeman Ahmad finally gave in after receiving Taliban threats on his phone each week for months, and where he found letters pasted at night to the front door of his house, warning his family that all would die if he kept his already dangerous job.

“The government was unable to control this area,” says Ahmad. “Now they [the Taliban] are very serious. Many of my friends left their jobs. The Taliban put checkpoints on the main roads; their intelligence is everywhere.” 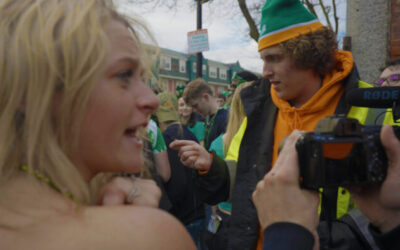