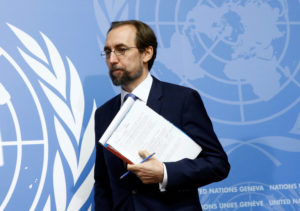 GENEVA — The United Nations human rights chief said on Wednesday that President Trump’s repeated denunciations of some media outlets as “fake news” could amount to incitement to violence and had potentially dangerous consequences outside the United States.

The rebuke by Zeid Ra’ad al-Hussein, the high commissioner for human rights, at a news conference in Geneva was an unusually forceful criticism of a head of state by a United Nations official.

Mr. al-Hussein was reacting to Mr. Trump’s recent comments at a rally in Phoenix during which he spoke of “crooked media deceptions” in reports of the violent clashes at a white nationalist rally in Charlottesville, Va., that resulted in the death of a counterprotester.

In Phoenix, the president’s words also appeared to whip up audience hostility toward journalists.

“It’s really quite amazing when you think that freedom of the press, not only a cornerstone of the Constitution but very much something the United States defended over the years, is now itself under attack from the president himself,” Mr. al-Hussein said. “It’s a stunning turnaround.”

Asked for comment, the White House press secretary, Sarah Huckabee Sanders, said in an emailed statement, “We believe in free press and think it is an important part of our democracy, but the press also has a big responsibility to the American people to be truthful. Their job is to report the news, not create it.

“Is it not ‘dangerous’ for the media,” she continued, “to create false narratives and overzealous attacks against the president that the American people chose to be their leader? The president is focused on growing our economy, creating jobs, securing our border and protecting Americans. Since those are also the priorities of most Americans, hopefully the media will make covering them theirs.”

In an attempt to deflect criticism that he had stoked racial divisions by failing to unequivocally condemn the actions of neo-Nazis and white supremacists in Charlottesville as racist, Mr. Trump had accused the news media of giving a platform to hate groups.

He singled out by name The New York Times, CNN and The Washington Post.

Mr. al-Hussein said that the violence in Charlottesville was “an abomination.” The Nazi salutes, the display of swastikas and the anti-Semitic chants had no place in the United States or anywhere else, he said.

“To call these news organizations fake does tremendous damage,” Mr. al-Hussein added. “I believe it could amount to incitement. At an enormous rally, referring to journalists as very, very bad people — you don’t have to stretch the imagination to see then what could happen to journalists.”

Mr. Trump’s relationship with the news media has veered from lobbing labels like “dishonest” and “enemy of the people” at certain companies to agreeing to cordial sit-downs with those very outlets, like a wide-ranging interview with Times reporters in July. 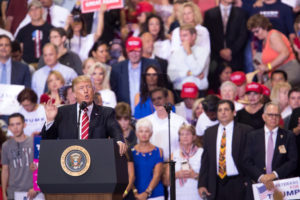 He was criticized for retweeting a short video meme showing him wrestling with and punching a figure whose head had been replaced by the logo of CNN, a network he has called “garbage journalism.”

But the president has shown a strong preference for programs on the Rupert Murdoch-owned Fox network, like Sean Hannity’s program and “Fox & Friends.”

Before the presidential election, Mr. al-Hussein had warned that Mr. Trump could be a danger to international stability, but on Wednesday, at a news conference to discuss Venezuela, the human rights chief focused mainly on more recent domestic events.

Mr. al-Hussein said the president’s demonization of the news media was “poisonous because it has consequences elsewhere.” If a journalist were to be harmed, he asked, “does the president not bear responsibility for this, for having fanned this?”

Countries that did not recognize the essential role of the news media could be inspired if journalists in the United States were attacked, he said. He noted that Cambodia’s government, for example, had withdrawn licenses from the news media and it had cited Mr. Trump as an inspiration for doing so.

“It emboldens those who think similarly to sharpen their assaults on these communities,” he said.

The number of anti-Semitic attacks in the United States in the first three months of this year was 86 percent higher than in the same period last year, he said, citing figures from the Anti-Defamation League.

Mr. al-Hussein compared Mr. Trump to a bus driver “careening down a mountain path.” From a human rights perspective, he said, “it seems to be reckless driving.”