ON HAITI: Welcoming Haitian refugees to Canada isn’t about generosity but justice

Canada has a hand in the misery Haitians are fleeing. Asylum should serve as reparations. 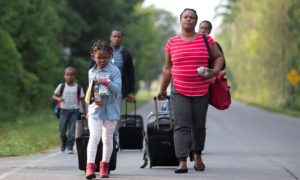 A family from Haiti walk to the US-Canada border to cross into Canada from Champlain, New York, U.S. August 11, 2017. Photograph: Christinne Muschi/Reuters

The minders of Canadian PM Justin Trudeau’s brand are surely displeased. He’s spent two years cultivating an image of Canada’s refugee system as the political equivalent of airport hugs and teddy-bears. And now the pressure is on him to act like that were remotely the truth.

The image of the country as a welcome haven was pitched to win the support of millions of people in Canada who rightly feel two things: compassion for the plight of refugees and disgust for the antics of Donald Trump. But refugee rights advocates had warned what would come to pass: desperate people would take Trudeau at his word.

Hence an influx of thousands of Haitian refugees from the United States—afraid of being deported back to Haiti by Trump—now await an uncertain fate in Canada. The Liberal government may have been happy to reap the political benefits of Trudeau’s PR posture. But apart from accepting a small number of Syrian refugees, they have dumped hundreds back in Haiti since they lifted a ban on deportations to the country in 2016. And they have studiously avoided removing other barriers that would make Canada a truly welcoming country.

The current debate has so far focussed on one such barrier: a 2004 agreement with the US that bars almost all refugees from making an asylum claim at a Canada-US border post. That’s why they are increasingly turning to precarious crossings—at which point they can at least get a hearing. This agreement—whose basis is the indefensible notion that the United States is safe for refugees—should long ago have been scrapped.

Instead Trudeau has turned to admonishing Haitians, dispatching a minister to the United States to warn Haitians against seeking asylum in Canada. “For someone to successfully seek asylum it’s not about economic migration,” Trudeau warned. “It’s about vulnerability, exposure to torture or death, or being stateless people.”

“Economic refugees,” of course, are not entitled to asylum. And this is where the base ranting of right-wing tabloids and anti-immigrant racists, who have stoked hate and fear of “selfish queue-jumpers,” dovetails with the high-minded reasoning of elite pundits and Liberal policy-makers preaching pragmatic limits and strict refugee criteria.

Both adhere to a brand that is much more enduring than this latest Prime Minister’s: the brand of an innocent Canada, whose benevolence is indisputable, whose humanitarian impulse is never in doubt. What they disagree about is whether Canada should bestow it on refugees.

Astonishingly, what has merited not a single mention in mainstream discussion is that Canada doesn’t stand at a remove from the misery that Haitians are fleeing: we had a direct hand in it. Ignoring this history—and absolving Canada of responsibility for Haiti’s situation—has created the greatest barrier of all to refugees receiving the welcome they deserve.

Haiti’s long-suffering people, who have endured a line of dictatorships, had a brief respite in the last quarter century: a popular democratic wave that swept priest Jean-Bertrand Aristide to power. He raised the minimum wage from mere pennies, disbanded an army that bullied the population, and started providing education and medical care to the poor majority.

Defying the agenda of the Haitian elite and multinational companies who used the country for cheap labour made Aristide enemies—the US, France, and sadly, Canada. in 2003, the Liberal government of the time hosted US and French officials to plot Aristide’s ouster. They cut aid to his government. And when US marines invaded the country, Canadian soldiers guarded the airport while they flew out Aristide and dumped him in Africa. A United Nations military force, commanded for a period by Canadians, occupied the country, providing cover for the regime installed after this coup d’état. Thousands of Haitians were killed.

The Canadian government’s role was hardly based on humanitarianism: having refused a full role in the US war on Iraq, they needed to get back in the good graces of George Bush. In a moment of candour out of sync with our humanitarian brand, ex Liberal Foreign Affairs Minister Bill Graham explained: “Foreign Affairs view was there is a limit to how much we can constantly say no to the political masters in Washington…eventually we came on side on Haiti, so we got another arrow in our quiver.”

The cost to Haitians of this cynical calculus was incalculable. Since the coup, Haiti has lurched from disaster to disaster, compounded by governments more accountable to the US than its own people. The devastating earthquake of 2010 was shaped by inequality and deliberate under-development that Haiti was plunged back into after Aristide’s ousting. The impact of similar storms on neighbouring Cuba—whose measures to lift people out of the most impoverished infrastructure have not been blocked by western governments—was a fraction of what it was in Haiti.

Western governments have tried to wash their hands of their victims. In the wake of the earthquake, Obama’s administration built a fortress around Haiti: coast guards cruised the waters to prevent any from fleeing; air force bombers dropped messages in the country, warning that “if you leave, you will be arrested and returned”; and a US private prison company started setting up a detention centre in Guantanamo Bay, while Haitians had not yet dug themselves out of the rubble.

And the reconstruction effort that millions of people around the world compassionately contributed to? Botched by the U.S. and Canada, it left Haiti with plenty of industrial parks for sweatshop employers and luxury hotels for tourists and NGO officers, but virtually no new housing for the million Haitians who had been made homeless. To make matters even worse, the occupying UN force introduced the world’s largest cholera epidemic into the country — it has killed 30,000, infected 2 million people, and rages on.

Canada has “slapped some make-up” on the situation to justify deporting people to the country, says Haitian human rights lawyer Patrice Florvilus, who fled to Montreal from Haiti in 2013 after facing death threats. “Canada claims things have returned to normal. They have not. There is criminalization of homosexuality and dissent, assassinations, a corrupt justice system. So much suffering has flowed from the coup onward, and the state now has no capacity to protects its citizens. Canada should assume responsibility for the chaos and injustice it helped create.”

Haiti is today sliding back toward dictatorship: disastrously bad elections, sanctioned by the US and Canada, have produced a parliament packed with thugs and drug dealers, the old army is being revived, and leading figures in the current government have links to the dictatorships of old.

All of this could hardly be a better example of the slogan repeated by migrant justice movements around the world: “We are here because you were there.” Western government’s wars, their ransacking of resources, the manipulation and impoverishment of poor countries, has led to an inevitable flow of displaced and persecuted to our shores.

“If Canada wants to become a real beacon for refugees, here is an opportunity prove it,” says Florvilus, who believes Canada should grant special refugee status to the arriving Haitians.

He’s right. After all of our crimes toward that country, asylum should serve as the barest of reparations. The refugees arriving are hardly a “flood,” or “unsustainable” — they are drop in the bucket alongside the immigrants that arrive every year. As climate change wreaks devastation around the world, these numbers are sure to grow.

In past decades, mobilizations led by the Haitian community in Montreal have forced the Canadian government to act more in line with its rhetoric. That can happen again. Now is the time to fight for the values that will govern how we address the graver refugee migrations to come.

In the final account, welcoming refugees isn’t a matter of generosity, or burnishing Brand Justin — it’s a matter of justice.