AFGANISTAN: This 1972 Photo of Women in Miniskirts Convinced Trump to Remain in Afghanistan 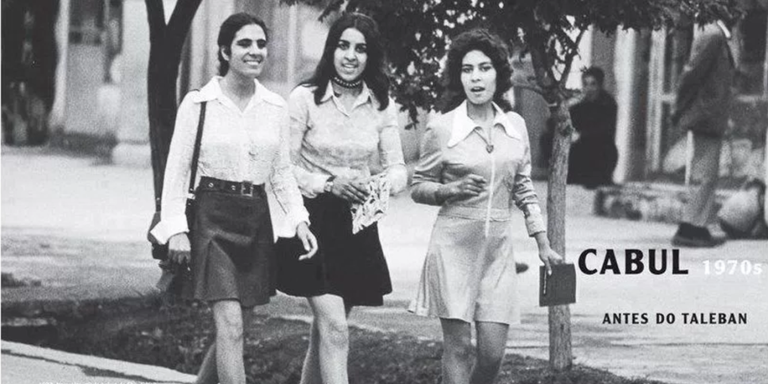 Last week, hours after President Trump announced in primetime that he would—despite his initial instincts—recommit American troops and resources to the war in Afghanistan, news broke that it was this 1972 photo that had swayed him.

According to The Washington Post, Defense Secretary Jim Mattis and H.R. McMaster, Trump’s national security advisor, had for months cautioned the President that withdrawal from Afghanistan would have disastrous consequences. McMaster, the Post explains, effectively framed his appeal to Trump, well, culturally. Desperate to prove Afghanistan wasn’t doomed to its current circumstances, McMaster showed Trump a black-and-white photo of Afghan women, strolling through Kabul in miniskirts.

Every few years, photos like this one ricochet across the web, especially on Facebook and Twitter, where they’re shared both by the well-intentioned who’ve watched with horror the erosion of women’s liberties in Afghanistan and across the Middle East, and by arch conservatives, who, as The Guardian points out, express concern for women in the Middle East in order to better silence progressive feminist voices at home.

ISN’T IT POSSIBLE THAT “THE ONLY [FACTOR] THAT COULD MOTIVATE THIS PARTICULAR PRESIDENT IS A LITTLE THIGH”?

And yet while the images predictably crop up on social media, they’re seldom used as cornerstones of foreign policy. Rosa Brooks, professor at the Georgetown University Law Center and the author of the book How Everything Became War and the Military Became Everything, isn’t surprised. Perhaps, she muses, McMaster knew he needed to frame the situation in terms Trump could understand—that is, miniskirts. And it’s rather horrifying, but admit it, Brooks presses, isn’t it possible that “the only [factor] that could motivate this particular President is a little thigh”? Couldn’t it be that, “Donald envisions a happier Afghanistan where everyone looks a bit more like Melania?”

Still, Brooks concedes that there’s a more generous read. When she served in the Pentagon under President Obama, photos like the one McMaster showed Trump weren’t uncommon. “Not only that particular picture, but also pictures of [young women] sitting in classrooms and of women doctors and of women giving lectures at conferences and pictures of Afghan men, too, engaged in ordinary activities in mixed groups,” Brooks recalls. The photos were meant to demonstrate that “the Afghan people are people like everyone else,” she says, and that the current “quote-unquote” culture in Afghanistan has been imposed on its populace by the Taliban. It’s an important reminder. “It’s just false to say Afghanistan has always been the way the Taliban wanted it to be,” Brooks continues. “It hasn’t. it changed before; it could change again.”

“IT’S JUST FALSE TO SAY AFGHANISTAN HAS ALWAYS BEEN THE WAY THE TALIBAN WANTED IT TO BE. IT HASN’T. IT CHANGED BEFORE; IT COULD CHANGE AGAIN.”

Within Afghanistan, the point stands. Rina Amiri, who was born in Afghanistan, served as a senior advisor to the late U.S. Special Representative for Afghanistan and Pakistan, Ambassador Richard Holbrooke, and is now a scholar at the NYU Center on International Cooperation, explains that well before 2001, even before the Soviet invasion in 1979, “there was a robust debate” between the country’s moderates and traditionalists over whether to experiment with democratic ideals, including the full enfranchisement and civic participation of women. That’s why, according to Amiri, so many Afghans open up their own family photo albums and insist, “Look, this is already who we are. You’re not necessarily bringing democracy to us. You’re not creating this. We have an authentic history that’s our own.“

“These were the lives of our mothers and fathers,” Amiri continues. “They couldn’t have dreamt that Afghanistan would be where it is now.” To wit, when Amiri’s mother visited her in Kabul while she was dispatched there for the U.N., she didn’t recognize her own childhood home. “It had changed so drastically,” Amiri says. “She was just dumbfounded.” The photos are talismans, Amiri continues, proof that the situation in Afghanistan now may be just an “aberration.”

Of course, that appeal of this visual call to arms, however well-meaning, isn’t a plan—much less a military strategy. A photo doesn’t tell us how to win a war or how much it will cost or how successful the United States can be overseas, whatever the motivations of the official who brandishes it. But it can at least push back on the narrative that Afghanistan is somehow beyond repair. Maybe it’s a paternalistic approach, Brooks allows. But it resonates.

And yet whatever spurred Trump to rule as he did, whatever it was in the women’s lives or looks that “moved him,” it didn’t elicit a real commitment to advancing women’s circumstances under the Taliban. Last week, Trump emphasized the United States would not be “nation-building” again, but “killing terrorists.” And when Secretary of State Rex Tillerson was asked point blank whether the United States would demand that the Taliban restore women’s freedoms in any potential peace settlements, Tillerson countered that “it’s not for the U.S. tell them that it must be this particular model, it must be under these conditions,” adding, “I think that’s what the President says when he means we’re no longer nation-building.”

That is, a photo of women in 1972 may have convinced Trump to remain in Afghanistan, but it failed to inspire him to seek a course of action that would take into account the condition of women there in 2017.

Amiri, for one, would have preferred McMaster show Trump photos of those who battle for women’s freedom now. “He wouldn’t have to date back,” she says. “Today, you could find thousands of pictures of Afghan women in government, Afghan women in senior positions, Afghan women as ambassadors and leadership positions at the local level. These pictures exist.” And the women in them don’t need to be stripped or saved. They need to be supported, to be empowered to decide for themselves what future they want.

Brooks, too, stresses that the United States should seek the perspectives of women in Afghanistan, precisely because a misogynistic culture has made it so difficult to publicly hear from them. She cites a recent New York Times story on a female-led social media movement under the hashtag “#WhereIsMyName,” a catchall initiative that aims “to challenge women to reclaim their most basic identity, and to break the deep-rooted taboo that prevents men from mentioning their female relatives’ names in public.” Especially in Kabul and in bigger cities, Brooks maintains, there are many, many Afghan women who want to be heard. Amiri sums up the frustration: “So many of the discussions are actually a very narrow debate” about say, troop numbers, drone strikes, or deployment: “But where do the Afghans themselves come in?”

“We’ve been having the same limited conversation,” Amiri continues. “We’ve been talking about the same limited course of action, and there isn’t a quick win.” Trump may claim that he’s interested only in “killing terrorists,” but those who’ve worked in Afghanistan for decades know that there is no annihilation without support for institutions that can fill that vacuum. “This is the work that doesn’t get attention,” Amiri says. And certainly not from Trump.

Since he was elected, Trump has demonstrated an almost total disinterest in the health, wellness, and enfranchisement of women not only in Afghanistan, but around the globe. In his first week in office, he expanded the anti-abortion Mexico City Policy. Later, he cut off funds to initiatives that benefit women in the world’s most vulnerable areas, including one housed at the U.N. that reached nine million people in crisis situations in 2016 alone, providing “HIV/AIDS prevention services, domestic violence counseling, pregnancy checkups, safe childbirth as well as midwife training, prenatal care and safe delivery services.” And while the White House eventually retreated, in May 2017, a memo circulated that suggested the administration was prepared to end Michelle Obama’s landmark “Let Girls Learn” education initiative. So: relative peace in Afghanistan at the expense of women’s freedom—how could we be surprised to see Trump strike that deal?

For what it’s worth, Brooks and an entire school of research warns against that thinking. The evidence, she explains, “suggests very, very strongly that when you try to buy stability or peace at the price of women’s rights, it does not endure, whereas there’s a ton of research on the direct correlation between the enfranchisement and inclusion of women and girls in politics, in peace negotiations, in education, and reduced levels of internal and external conflict.” What Trump and Tillerson have proposed now—”it’s a short sighted tradeoff,” not to mention “a real betrayal” of the Afghan women whom he supposedly recommitted to this war to protect.

But then, it wouldn’t be the first time he used women as a prop.