ON DEVELOPMENT: Aid Credibility at Stake as Donors Haggle Over Reporting Rules 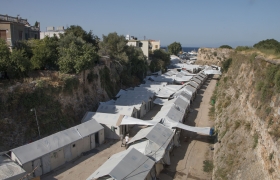 The world’s rich countries spend billions at home but report it as “aid”, exploiting a loophole that enables donors to mislead the public and cut vital development budgets. IRIN has dug into the data to reveal the worst offenders and the extent of a practice that topped $15 billion last year, seriously undermining the credibility of aid statistics. Given the wide differences in how they apply the ambiguous rules, donors have been trying to set new boundaries on in-donor refugee aid since February 2016.

However, progress has been slow, and the process again stalled at a meeting in Paris on 10 July. A working group on the issue will now need further rounds of negotiation if proposals are to be ready for adoption at a high-level meeting in late October.

Under current accounting rules, the costs of receiving refugees can count towards a donor country’s total overseas development assistance. In-country ODA has ballooned: In 2016, leading donor countries reported $15.4 billion of domestic spending on refugees as ODA, a huge rise from $3.9 billion in 2012 and several times more than they spend on refugees abroad. That’s also more than they spent on emergency aid in foreign countries, and more than three times the income of the UN refugee agency.

In Denmark, where a quarter of ODA was reportedly spent in-country, national auditors say the government misreported some figures. But Isabelle De Lichtervelde, policy manager for development finance at the ONE campaign, told IRIN that Denmark is among some “very concerning countries” and is showing “poor behaviour” in aggressively chasing the in-donor category of ODA.

Six countries met the UN target of 0.7 percent of gross national income spending on aid. However three – Germany, Denmark, and the UK – only reached the threshold by including in-country ODA. The Netherlands, Belgium, Iceland, Switzerland and Denmark all report over $20,000 per new refugee as ODA.

While Denmark and some others apparently lobby for a broad definition, a swathe of civil society groups is against reporting in-donor refugee costs as ODA at all, let alone widening the loophole. Julie Seghers, OECD policy and advocacy advisor of Oxfam, told IRIN “it is legitimising the spending of ODA money within donors’ own borders, and for an objective that doesn’t serve aid’s core purpose, which is to fight poverty in developing countries.”

Denmark has released its own view of the accounting rules showing how it intends to extend its interpretation this year and add more to the category. According to preliminary OECD and national data, Denmark allotted $420 million in 2016 but granted asylum to only 7,444 new refugees. Its response to the OECD suggests it would aim even higher in 2017. For example, it plans to include more costs such as police time and asylum appeals processing as well as other administrative expenses that go far beyond core spending on food, accommodation, and language training.

Denmark’s national auditors however have warned Danish MPs that the accounting for some aspects of refugee ODA is “neither rigorous nor transparent”. In addition, some was double-counted or wrongly allocated, according to a June report. The fluctuations and changing methodologies on in-country ODA may lead to “less predictable” foreign aid spending, the auditors found. In response, Denmark has enacted a new regulation to smooth out the impact of fluctuations in refugee spending on overseas development planning.

An analysis by Oxfam of Denmark’s policies in December found its ODA refugee spending “staggering”. The report claims “it is not unlikely that Danish development aid is co-financing empty housing facilities in Denmark”, due to an excess of capacity funded by the government despite falling refugee numbers. The government chose not to respond.

A spokesperson for the Danish Ministry of Foreign Affairs acknowledged that Denmark was “actively” involved in the talks on in-donor refugee costs but declined to go into details. The official said Denmark supports work to make the rules “more precise”, and to increase “transparency and comparability”.

Stuck in the middle are the staff of the Organisation for Economic Development (OECD), a membership organisation of major economies, often called a rich countries’ club. The Paris-based OECD is the venue where the ODA rules are made. Its secretariat back in 2001 was already uncomfortable with what they call the in-donor element: “donors’ expenditures on refugees who arrive in their countries – while commendable from a humanitarian point of view – do not make a sufficiently direct contribution to the economic development and welfare of developing countries to qualify as official development assistance. Including such data undermines the credibility of the ODA concept.” OECD officials today rarely criticise their member states openly, but try to hold the line on the principle of development aid in private.

OECD official Brenda Killen, writing in a personal capacity from Uganda’s recent refugee fundraising conference, did remark pointedly that the OECD should aim for “fidelity” to the original purpose of ODA, which she phrased as “the economic development and welfare of developing countries”, and said: “we need more and better data on aid from donor countries, including what is being spent inside their own countries.”

Few details have emerged about the ongoing negotiations, and donors are tight-lipped. “No decisions regarding ODA guidelines were taken”, at the last meeting on 10 July,  according to an email response to IRIN from the Swedish Ministry of Foreign Affairs.

Nevertheless, IRIN understands the biggest remaining sticking point is about the costs of handling asylum seekers whose claims are rejected. One observer told IRIN the “dangerous precedent” of in-donor ODA means it’s critical to get it right. The new rules are unlikely to apply until 2019. Donor countries want recognition for taking on refugees, but, the observer said, ODA was the wrong yardstick for measuring their fulfillment of their refugee convention obligations. In donor countries, a range of ministries now have their eye on the development budget and the rules must prevent donors “gaming the system”, the observer added.

Seghers told IRIN that NGO advocates, including Oxfam, argue that any changes should be careful not to encourage donors to pad out their figures. She said the new rules should clearly define what’s not allowed, and give more detail and transparency on how the figures are arrived at.

The OECD’s statistical directives, including tables and annexes, already come to 294 pages, many about reporting ODA.

Closed-door committee meetings at the OECD regularly update the definitions of what’s allowable as ODA and how it should be calculated. Last year, for example, the members agreed new guidelines allowing certain types of military and security assistance to count. The debates tend to roll on: discussions continue on what support to the private sector should be included and how to measure it, while peacekeeping and security spending are attracting another round of attention.

However, given the migration “crisis” in Europe, and pressures on development spending in general, the eligibility of refugee spending is now a top issue for the OECD’s Development Assistance Committee. In February 2016, OECD DAC members agreed it was a priority to sort it out: “It is necessary to improve the consistency, comparability, and transparency of our reporting of ODA-eligible, in-donor refugee costs… We therefore agree to set up a clear, transparent, and inclusive process to this aim.”

Sixteen months later, the definitions remain ambiguous and donors continue to draw up figures based on their own interpretations — and consciences. The current rules, laid down in 1988, allow “official sector expenditures for the sustenance of refugees in donor countries during the first twelve months of their stay”. They exclude measures for “integration”, without saying what that means. This leaves a lot of room for interpretation, observers point out.

Do donors include the costs of processing asylum seekers whose claims are rejected? Should the clock therefore start after the determination of refugee status? Should they charge the costs of all healthcare and education? Can they factor in police time or the expense of hearing legal appeals?

The answers to a lengthy questionnaire compiled by OECD confirm an inconsistent range of reporting practices. Donors report between zero and $31,000 per refugee as ODA (in 2014 figures). Australia, Luxembourg, Poland, and South Korea decided to report no in-country refugee costs at all. But the Netherlands reported $31,933 per head, the UK $3,261, and Japan $337. Denmark reported $21,791, according to the survey.

Why does it all matter?

“How credible is aid data when aid money is being used to fill in domestic budget gaps?”, said Oxfam’s Seghers. Massaging the figures means a loss of confidence in the data: “this puts the credibility of ODA as the yardstick of development aid at risk”, she added.

The debate over definitions may be “extremely technical”, but “they’re also very political”, said De Lichtervelde. Aid is a “crucial resource… you need to protect it.”