The National Solidarity Program is the reason CSFilm director, Michael Sheridan, first went to Afghanistan to document Afghan initiatives from the Afghan Perspective. It remains a gold standard for integrated disarmament, economic and social development. A number of our Afghan trainees/filmmakers did storys on the NSP such as Knocking on Time’s Door, https://csfilm.org/films/fruit-of-our-labor/#knocking

Not so long ago, 15 years to be exact, I remember when people in the districts of Kandahar used animals to transport their agricultural harvest to the provincial center. There were a few, if any, motorable roads, and we had a limited number of health centers and schools in the province. Most of the infrastructure laid in ruins. But worst of all, the economic condition of the average Afghan was quite bad with little or no access to income, opportunities, and facilities. 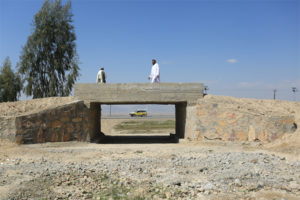 Things have changed since 2003. While many development projects have been implemented in Kandahar Province, the National Solidarity Programme (NSP) has been one of the most popular and high impact. Running from 2003 to 2016, NSP was implemented in 16 of 17 districts and set up 1,952 Community Development Councils (CDCs), which implemented over 3,300 projects.

In Kandahar, communities are very conservative, and, overall, the province is highly traditional. When the program was launched, people in Kandahar were not interested in establishing CDCs through holding elections at the village level.

In 2005, as an engineer with UN-HABITAT working as a Facilitating Partner with NSP, I ended up travelling to many districts in Kandahar. One of these was Arghandab district. In my interactions with locals there, I realized they were not ready to accept women as equal decision-makers.

To address this, NSP conducted social awareness trainings and encouraged people to join the program for overall development and infrastructure management. These trainings encouraged some villages to establish CDCs and they realized that working with women eased the implementation of projects in their villages. This encouraged a behavior shift in neighboring villages as well.

Gradually, other villages and districts became eager to establish CDCs and join NSP too. Village by village and district by district, NSP became one of the most popular programs in the province. Most importantly, NSP accessed the very remote villages in Kandahar, where residents did not even have Tazkiras (national ID cards), and linked them with government departments.

Between 2003 and 2016, the National Solidarity Programme (NSP) provided block grants for over 3,000 development projects in Afghanistan’s southern Kandahar Province. Over 1,952 Community Development Councils (CDCs) have been elected to decide on their respective community needs as well as to oversee and monitor project implementation. With support provided by the World Bank, the Afghanistan Reconstruction Trust Fund and other donors, NSP ensured citizen engagement and meaningful development with decisions being made at the grassroots level. It brought communities closer, one project at a time.

One of the biggest achievements of this program has been increasing women’s participation in the overall economy. CDCs brought women out of their homes and provided them with an opportunity to take part in the development of their villages.

I have been working as a Provincial Director with the MRRD for four years now. When NSP was active, I had more than 400 visitors per day in the office, including women. They were all CDC members from different parts of Kandahar and they were eager to implement more projects in their villages. Most of the CDCs had active female members and the men listened to them.

Now when I compare Arghandab district in 2003 to 2016, I can really see the improvements and development. In 2003, Arghandab had hardly any roads, culverts, schools, or bridges. Villages were not connected to markets and some villages were insecure. There were no women participating in the decision-making process. But now, we have women members in CDCs and there is not a single village in Arghandab left untouched by NSP development activities.

During my visit to Arghandab district recently, Saleh Mohammad, head of the Mirab Khoran village CDC told me, “We are happy that we accepted NSP. We built a bridge that connects both sides of the village and made transportation easier for all villagers.”

At the initiation of the Government of Afghanistan, the Citizens’ Charter Afghanistan Project (CCAP) replaced NSP. The objective of the CCAP, a social contract between the government and CDCs, is to improve the delivery of core infrastructure and social services to participating communities through strengthened development councils.

In terms of resources, we already have well-functioning CDCs with full representation of men and women and over 13 years of experience in implementing projects. For the first round, we will implement CCAP in the three districts of Spin-Boldak, Takhta-Pul, and Panjwayee. Under CCAP, we want to implement the projects equally in all the districts of Kandahar and work on improving coordination to make our work more effective.