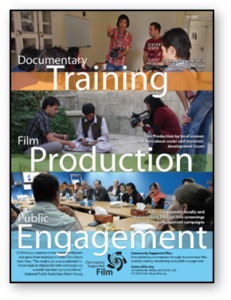 Introduction: New Immigrant and Refugee Visions (NIRV) is a messaging project designed to inform US public opinion about the experience of new immigrants and refugees. NIRV will train new immigrants and refugees to produce a series of short non-fiction films that will amplify their stories and perspectives. In the current climate of anti-immigrant sentiment among some US communities, this initiative will produce narratives that focus on the integration challenges faced by immigrants and the contributions they make to our culture, economy and social fabric. Their narratives will be used by organizations nation-wide to stimulate conversations that advance systemic change.

Background:  CSFilm trains women and men in underrepresented communities to use documentary filmmaking to reveal their economic and social realities.  Their films are screened internationally to stimulate dialogue informed by local perspectives.

In 2010, Community Supported Film trained 10 Afghans in documentary filmmaking.  The resulting award-winning films were gathered in the collection The Fruit of Our Labor: Afghan Perspectives in Film.  As NPR’s “Here and Now” host Robin Young reported: “[CSFilm] put cameras in the hands of Afghans and gave them training to make films about their lives. The result is an unprecedented intimate look at Afghan life with exchanges no outsider has been privy to before.” The Fruit of Our Labor films stimulated dialogue, rethinking and action from town halls to the halls of congress.

CSFilm conducted a similar bottom-up training and production process in Haiti that produced ten remarkable short films, Owning Our Future-Haitian Perspectives in Film. Going beyond disaster reporting, these films capture the experiences and points of view of Haitians – a rarity in the international conversation about what has and has not happened in the long and painful history of Haiti’s economic, social and political development.

New Immigrant and Refugee Issues: We are living in the midst of a global crisis for immigrants and refugees. Pew Research Center reports that “Nearly 1 in 100 people worldwide are now displaced from their homes, the highest share of the world’s population that has been forcibly displaced since the UNHCR began collecting data on displaced persons in 1951.”

With 60 million people displaced in 2015, and the causal conditions worsening, the 21st century is expected to be defined by how we respond to the flow of refugees and immigrants. Despite or because of this humanitarian crisis, the anti-immigrant backlash continues to grow in the U.S. and internationally and is now finding unprecedented support from the current administration. We need to counter xenophobia, racism, NIMBYism and wall building by creating understanding and appreciation for new immigrants and refugees through their voices and visions. 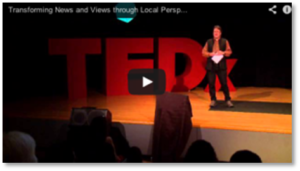 Goals: CSFilm’s vision is driven by the knowledge that democracy, social stability and equitable economic development depend on a well-informed citizenry. The predominance of information about the “other”, however, is still produced by outsiders in a top-down colonial news system guided by self-interest. CSFilm’s mission is to help citizens make responsible decisions about their community, country and world by strengthening their access to local perspectives. 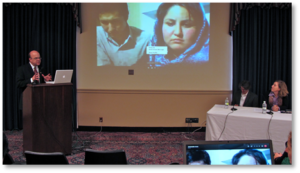 US Congressional Briefing and Screening of The Fruit of Our Labor. Representative James McGovern (D-MA) shares his gratitude for the opportunity to hear directly from Afghans and emphasizes that “those of us who want to see an end to war are not saying let’s abandon the people of Afghanistan.”

Discussion guides for organizers, educators and institutional gatekeepers, including police, employers, and social service providers will be produced to help focus discussions in town halls, classrooms, conferences, government meetings, etc. In addition, the films will be broadcast on the national network of cable access stations and made available to other broadcast and social media networks and the press.

March-June: Outreach and selection of new immigrant and refugee trainees and filmmakers;

October-December: Production of educational materials for distribution with the mastered and duplicated films;

Resources: Thanks to the generous support of many individual donors, CSFilm has raised over 2/3rds of the $65,000 budget required to implement the training, production and initial public engagement campaign. CSFilm is actively seeking additional funds to fully implement this project and will continue our efforts until the funding goal is reached.

Conclusion: This initiative will harness the knowledge and outreach capacity of organizations with expertise in documentary filmmaking, communications, the immigrant and refugee experience, national outreach and policy. The goals of NIRV are to advance narratives that counter misinformation and bias, promote an inclusive culture and economy, foster empathy for and ownership of the problems and solutions faced by immigrant and refugee communities and engage people in new thinking, behavior and actions that lead to sustained and systemic change.