Thankful for the opportunity  to screen films from “Owning Our Future-Haitian Perspectives in Film” today at the Haitian Diaspora Challenge Initiative Symposium.  The spirit of “Owning our Future” fit well with the general theme of the day that Haitians must own and implement the change they envision.  Paul G. Altidor, Ambassador to the US, spoke most directly to this issue.  The following are my notes from his remarks:

To change the cycle of poverty in Haiti we need to change the narrative that Haiti is nothing but a special need student.

The narrative of pity for Haiti is keeping Haiti down and pity is not a sustainable approach to development.  So often people tell me, “I’ve tried this Haiti thing so long, I’m done with it.”

I don’t want the Haitian Diaspora to end up with the same frustration because it takes a project-based approach rather than integrating their ideas into collaborative, movement-based initiatives.

It has proven to be counter productive to have all these individual initiatives.  A lot of smart, well thought out initiatives do not have a long-term view. 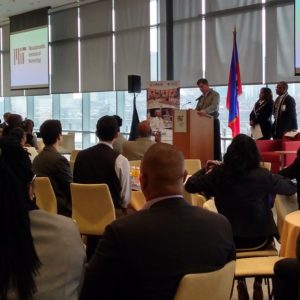 This project, that project, the other project, is not a strategic approach to long-term improvements inHaiti.  Projects need to situate themselves in movements, to make themselves a part of the ongoing dialogue.

Boston’s Mayor Walsh opened the day with a very positive, energetic set of remarks emphasising that no matter what happens in DC, Boston is and will remain an open, welcoming and safe place for all. Happy (especially after Trump’s inaugeration yesterday) to be engaged with this powerful day of reflection and recognition of sustainable, innovative development for Haiti, by Haitians. #LookListenLocal @csfilmorg @naahphaiti