ON THE MEDIA: Documentary pays? The price of filmmaking – part one

In this special report, realscreen examines the economic pressures placed on some documentary filmmakers working today, and why doc directors – many of whom also play double duty as producers on their projects – aren’t paying themselves for their time.

In part one, we look at recent surveys and studies investigating the costs of doc making, while part two, to publish tomorrow (July 8), features funders’ thoughts on transparency around financing.

Forgoing personal wages to force down a budget and secure funding is a familiar exercise for doc makers. So familiar, in fact, it makes you wonder: if this is the so-called golden age of documentaries, why aren’t more filmmakers getting paid accordingly?

“It’s like I should be grateful to be able to do my art, and expecting to get paid is like an after-thought”
-Jesse Moss (The Overnighters)

The reasons are two-fold. The democratization of technology and abundance of distribution platforms allows most anyone to make docs, but with so many opportunities and a saturated market, it also means more doc makers – even veterans of the field – are struggling to first get their films financed, and then make money and recoup debts incurred.

Personal pay cuts and deferred fees abound, rendering documentary filmmaking a curious profession in which one pays an impossible price to sustain a career – if you’re lucky.

“Part of it is that tension between art and commerce that afflicts us,” offers Jesse Moss (pictured above, left), director of critically acclaimed doc The Overnighters (2014). “It’s like I should be grateful to be able to do my art, and expecting to get paid is like an after-thought.” 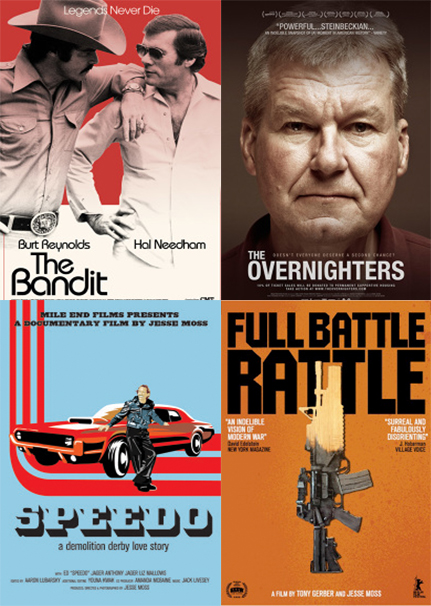 Moss recently made his fourth feature doc, the CMT-backed The Bandit – the first of his films to be fully financed at conception, allowing him to take a combined producing and directing fee. Most of his previous work, however, including Speedo (2003) and Full Battle Rattle (2008), was made through a combination of sweat equity, private equity, grant funding, loans and – as always – a significant personal financial investment.

“You assign a commercial value to your work, and it’s almost like that’s antithetical to the [act of] making art, yet we need to survive,” he says. “And because the system is so fluid, the way in which films are financed is so different in every film that your value on one project is not necessarily your value on another project because of the nature of the film itself.”

The golden age offers no golden rules for budgeting, but many argue it’s time now for a field-wide conversation about sustainability. If the doc community aspires to be less self-selecting and more diverse, part of that effort should include improved transparency around financing, and best practices for drawing budgets, discussing maker salaries and crediting.

It appears that for the documentary field to move forward, it needs to first step back and turn the lens on itself.

Unpaid or underpaid, from Los Angeles to London

Perhaps one of the best indicators that sustainability is becoming a priority in the non-fiction community are recent surveys delving into the pressing, day-to-day issues facing doc makers in the field.

A forthcoming study by American University’s Center for Media & Social Impact (CMSI), in collaboration with the International Documentary Association (IDA), is looking at the experiences of working documentary filmmakers and other industry professionals in the U.S.

Launched in late January, the tentatively titled “The State of the Documentary Field Trend Study: Perspectives from the Industry” had collected 573 complete responses to its IDA-distributed survey as of June 17, with a breakdown of about 47% directors and 28% producers. Full results will be presented at the IDA’s Getting Real conference in September.

Caty Borum Chattoo, co-director of CMSI and the study’s director, says preliminary findings show that about 67% of respondents who identified as documentary professionals do not make their primary living through doc filmmaking, and about 66% of those who identified as such made either no salary at all, or less than 50% of their annual salary from their films.

Initial findings of how recent doc projects were funded reveal the main sources of funding as foundation grants (31%), followed by personal finances (26%) and then broadcasting and cable licensing deals (21%). In response to how much personal money was spent on a recent project, about 36% said they spent between $5,000 and $50,000.

Meanwhile, the London-based Whicker’s World Foundation (WWF) in January partnered with Sheffield Doc/Fest and the European Documentary Network to assemble a picture of the current doc making field in the UK and Europe by reaching out to filmmakers via a 16-point questionnaire. The goal was to see how much the organization’s top funding award of £80,000 could buy for a doc maker.

Based on the responses of 191 participants at varying stages of their careers, findings revealed that around 27% of respondents said their time would have cost more than £60,000 if they had paid themselves fully for every day of work, while the median valuation was roughly £10,000.

In addition, 87% of respondents said they had not received the calculated wages for their work. Common reasons included “tight production budgets” or the inability to raise necessary funding, while some who worked on passion projects out of love, or a need of experience, simply didn’t expect pay.

Jane Ray, consultant artistic director for Whicker’s World, says the financial strain evident in their survey wasn’t only relegated to emerging talent, but also involved 30-year veterans of the industry.

“The whole emphasis on the broadcasters is the strength of your idea: ‘You seduce us and we will take your idea but let’s not talk about money,’ and it makes things very difficult because obviously the whole nature of doc production is enormously isolating,” says Ray.

“I think there’s a sense that it’s such a competitive world that if anybody gets a whiff that [a doc maker is] a bleeding heart, difficult person who is going to go into the commissioning room and say, ‘Look, are you going to pay me for this or what?’ they will never work again. I think it’s a mix of fear and shame.”

California-born doc maker Emily James was among the respondents of the Whicker’s survey. A UK resident since 1995, James studied documentary directing at the National Film and Television School (NFTS) and sold her first doc, The Luckiest Nut in the World (2002), to Channel 4. Her current feature effort is a copro between BBC’s ‘Storyville’ doc strand and A&E Indie Fund.

James hasn’t managed to pay herself much of a salary on any of her projects, and like many filmmakers, she subsidizes her docs through commercial work and savings. In the 16 years since graduating NFTS in 2000, the amount of time she has been in production – fully-funded – and without needing other sources of income adds up to five years.

Speaking of her experience at film school, James says there was little practical guidance around financing – a pattern she still notices while mentoring.

“Often you meet filmmakers and you show them a budget and they don’t even know what they’re looking at,” explains James. “If you’re not able to get your head around where the money is and how you use your resources to maximize efficiency, then it’s like you’re trying to run a race one-legged. It’s such an important skill but it’s one that gets very, very little formal teaching or education.”

In the Whicker’s World survey, James labeled the standard of paying everyone on a film crew full rates except yourself “auto-exploitation” but cautions that the wider commercial system also needs to be challenged.

“We’re exploiting ourselves, but we’re also being exploited by all the people around us who are making a proper living from what they’re doing, and using our work as the center of that.

“Nobody ever pays you back for all of that effort you put into [development]. But then, if the film is good, you suddenly have all of these other people that are working for distributors, festivals and broadcasters – who are being paid a waged job – and they’re using the work that we’ve created as the central commodity of their industry without ever repaying the people that took the major risk at the beginning.”