ON THE MEDIA: Documentary Filmmakers Find That an Agenda Helps With Financing

Social-issue documentaries are the white knights of cinema — vanquishing dragons, tilting at windmills — but they are not intended as agents of diplomacy. Right is right, wrong is wrong. Take no prisoners. Divide and conquer.

“It was such a nice, friendly atmosphere, because the movie was so evenhanded,” said the longtime anti-Indian Point activist Marilyn Elie, who, with her husband, Roger Witherspoon, a veteran environmental journalist, and Brian Vangor, the senior control-room operator of the plant, are principal characters in the film and have appeared together at festival screenings.

And by not being one, “Indian Point” sets itself apart not only from the drift of current documentaries but also from much of the money available to make them — money coming from institutions that place considerable importance on a film’s cause and its outreach plan (the organizational networking necessary to reach the audience sympathetic to that cause).

“If these funders weren’t funding activist films, they would be funding some other form of activism — not some other form of filmmaking,” said Marshall Curry, a director. His admittedly thorny films, including “If a Tree Falls: A Story of the Earth Liberation Front” and “Street Fight,” about African-American Democrats fighting one another for control of Newark, have faced problems with financing and outreach because they “were hard to rally troops around.” Green groups, for instance, fled from “If a Tree Falls,” with its sympathetic portrait of an environmental “terrorist.”

There is also an implicit constraint imposed when a filmmaker has pitched a film one way, and the story goes another. 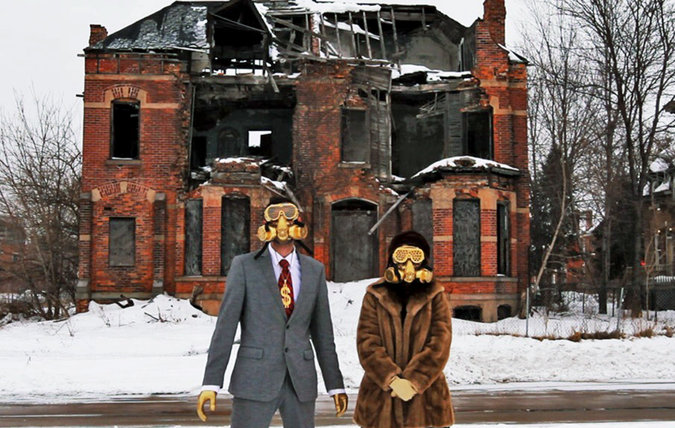 A scene from the documentary “Detropia.” CreditLoki Films

“The closest we ever came to an agenda film was ‘Detropia,’” said Rachel Grady. She and Heidi Ewing thought their 2012 documentary would be a positive story about Detroit. Then they started filming.

“As one does, if one is doing a good job, we found out the story was different from our thesis,” Ms. Grady said. “Luckily, the money we’d gotten was from the Ford Foundation, which was a no-strings grant maker.”

But other foundations, like the MacArthur Foundation, are no longer providing grants for individual documentary projects, choosing instead to channel money thorough smaller institutions. That change “was very, very painful,” said Julie Goldman, a producer of “Indian Point.” She said foundations have historically been places you could go for significant financial help “and not have to scrap for every $15,000. But they both decided to do the same thing. So it’s really challenging.”

The alternative is going to financiers who often want a post-release plan from a filmmaker, in preproduction, about how the movie will create a conversation, online or off. “The reality is you end up kind of guessing a lot,” Ms. Goldman said. “Look, some things are going to be obvious — who the partners are, what you can do for outreach. When you’re doing a film on Indian Point, it’s a question.”

What’s happened to documentary financing over the last decade, said Debra Zimmerman, the executive director of the specialty distributor Women Make Movies, “is the coalescence of a number of different trends, none of which has been really good for filmmakers who aren’t interested in making social-issue docs.” She cited the closing of the National Endowment for the Arts’ regional grants, the Rockefeller Foundation’s decision to directly stop financing film, “and the fact, unfortunately, that we don’t have any real national support for film as an art form.”

“So it’s left to private foundations that are basically created to get tax deductions so they can work on social issues,” she said. “That’s what the role of a foundation is.”

“It’s good that social-issue films are getting money,” she added, “but it’s bad that nothing else is getting funded.”

That isn’t quite the case, though many of the social-action entities — Impact Partners (“How to Survive a Plague”), the Bertha Fund (“God Loves Uganda”), Participant Media (“An Inconvenient Truth”), Chicken & Egg (“(T)error”), BritDoc (“3 and ½ Minutes, 10 Bullets”) and its forum Good Pitch (“The Invisible War”) — make no apologies for their agendas. “We’re seeing an explosion of funders moving into the films-for-change space who are working with films for the first time and are coming from more traditional philanthropy and need to be assured that the films will have application beyond the general audience,” Maxyne Franklin of BritDoc said.

Amy Halpin, the director of filmmaker services for the International Documentary Association in Los Angeles, oversees the Pare Lorentz Fund, which gives production money to films focusing on equal justice, environmentalism and other social issues. She said she has not found that “the tail wags the dog” — that filmmakers were tailoring their films to meets financing expectations.

On the other hand, “it’s a question within the field right now about how much we’re asking filmmakers to do other than being filmmakers,” Ms. Halpin said. “We’re asking them to drive these activist campaigns that can have career implications, because when you’re speaking at churches and schools and libraries for two years after you’ve made the movie, you’re not making your next movie. And you only get to be a filmmaker once every four or five years.”

But it’s hard for a financier foundation or broadcaster to not to hear the siren song of social action. “I wouldn’t say it’s a requirement,” said Courtney Sexton, vice president of CNN Films, “but we have an internal outreach and partnership person who works closely with the filmmakers we commission to help coordinate efforts that CNN can participate in.” CNN-financed documentaries have included “The Hunting Ground,” about sexual assault on college campuses.

Significant support for the filmmaker-sans-agenda has come from the Sundance Institute, where Tabitha Jackson, who runs the documentary fund, is widely recognized as sympathetic to the cause of the art documentary. A new Sundance initiative called the Art of Nonfiction is intended to support individual filmmakers, not strictly social-impact movies.

“It felt like we were at danger point maybe a couple of years ago,” Ms. Jackson said. “There was a risk that an inappropriate form of measurement would tend to reduce the funding that filmmakers got unless they jumped through hoops, or pretended to be able to do things they couldn’t. I think the conversation is different now. It’s about sustainability and diversity.”

For Ms. Meeropol, it’s also about objectivity, and how it goes unrewarded.

At a recent Q. and A., she said: “I had not a single filmmaking question from the audience. So despite my best efforts, the film becomes an advocacy piece. And I am a reluctant poster child for the anti-nuke movement.”

Correction: July 8, 2016
An earlier version of this article incorrectly stated the Ford Foundation’s policy regarding grant money for documentary films. Ford, through its JustFilms unit, continues to provide money to individual filmmakers; it is not the case that the organization has stopped giving grant money to documentarians.