AFGHANISTAN, DEVELOPMENT: What the future holds for Afghan women-aljazeera.com 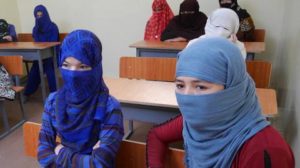 Afghanistan’s women have made significant gains in recent years, with more girls attending school and more women working outside the home.

But fear still overshadows the lives of many.

A resurgent Taliban recently provoked outrage by publicly executing two women, but as this 101 East documentary shows, the greatest threat many women face comes from loved ones at home.

Activist Noorjahan Akbar talks about the challenges in overcoming conservative attitudes in the face of rising “anti-woman propaganda”.

Al Jazeera: How would you describe the current state of women’s rights in Afghanistan?

Noorjahan Akbar: Like the current state of the country, the current state of Afghan women is tumultuous and unstable. While – since the US-led intervention – Afghan women have made a considerable amount of progress, with [today’s] increased insecurity, economic inequality, and radicalism, we are afraid that our accomplishments will be threatened, and the few civil rights and individual freedoms we have will be taken away from us.

Since 2009, the number of Afghan women working has increased, but a large number of female activists and journalists have left the country due to fear of violence.

When I talk about the threat of violence, I don’t just mean the Taliban – even though they are largely responsible for targeting and killing female teachers, police officers, journalists, and activists.

On a daily basis, Afghan women face harassment in public spaces. In fact, nine out of 10 women say they have faced harassment at some point on the way to work or school, and out of those, 14 percent say they stopped going to school because of it. Eighty-seven percent of Afghan women have faced verbal, sexual or physical violence at home.

The vast majority of cases of violence against women, even the public targeted assassinations, are not met with any legal consequences.

Despite all this, Afghan women are teachers, ministers, parliamentarians, musicians, writers, journalists, photographers, vaccinators and more, and we are working hard to make things better for ourselves and the country.

But in order for us to really participate in rebuilding Afghanistan, our security should be a priority for our government. When our bodies are fair game, when it is always open season on women, when we are fearful of losing our lives on a daily basis, how can we move the country forward?

Al Jazeera: The Taliban recently publicly executed two women – one of them in an apparent honour killing – in northern Afghanistan, according to news reports. Are you concerned that this could signal a downward spiral for Afghan women?

Akbar: The harsh reality is that even though this case caught the eye of the international press, these ‘honour’ killings are not out of the ordinary. Whether by the Taliban or family members, Afghan women are killed regularly for the simple fact of being born female or choosing their own husbands. However, what these specific public executions tell me is that the rule of law has further deteriorated in Afghanistan and that is not good for anyone.

Al Jazeera: Many Afghan women suffer domestic violence at the hands of their family. How difficult is it to change attitudes towards women?

Especially in the last few years, there has been an increase in radical anti-woman propaganda in the big cities. Local mosques that were once moderate and somewhat accepting of women’s rights, now spend entire sermons on how women shouldn’t be allowed to work, study, or even speak in public.

In addition to using public executions to make a show of women’s punishment and terrorise women into silence and into the margins, today’s radicals use televisions, social media, sermons, and even schools to perpetuate and sanctify violence.

Al Jazeera: Impressive gains have been made in the number of girls attending school in Afghanistan. Is there a danger that these rights could be eroded?

Akbar: Yes, and we are seeing the erosion right now. In 2014, 163 schools were attacked in Afghanistan.

The majority of these schools were girls’ schools. This year, these attacks have increased. In January, a girls’ school was torched in Kabul – something that hasn’t happened in the capital city since the Taliban took power in 1996.

In February, the Ministry of Education said 700 schools were closed due to insecurity depriving thousands of girls and boys of an education. Just this week, 20 school girls were poisoned in Ghor province.

These attacks are terrifying, not just for those who have faced the violence themselves, but for the country as a whole.

Al Jazeera: International organisations have raised concerns that women’s rights activists are being deliberately targeted. How difficult is it for activists to stand up and demand change?

We have seen our sisters killed and asked for justice only to be threatened and sidelined more. We have called for the prosecution of those who killed Malalai Kakar, Hanifa Safi, Safia Ahmed Jan, Zakia Zaki and many more journalists and activists killed for being outspoken women and we have been told to shut up.

We are told on a daily basis that we shouldn’t talk about the issues we face, the rape threats we get, the violence women around us face because it will bring shame to our country.

The reality is that the fact that these injustices exist is a matter of shame – not people demanding an end for it.

Al Jazeera: Afghan women still face numerous challenges in their daily lives. Are you optimistic about the future?

Akbar: Yes. I am optimistic because I see the passion with which young women are working for change inside the country and because I know that despite the heartache, the threats and the disappointments this fight are worth it.

Being pessimistic will not help us. It will only discourage us from working. I prefer not giving up. Afghanistan belongs to me and my peers as much as it belongs to the radicals advocating for violence, and we will not surrender the country to them – not without a fight at least.

Click here to watch the 101 East documentary, “Afghanistan: No Country for Women”.